This article originally started as a thread on Twitter and then decided to make an article about it regarding my journey as an open-source contributor, Hope you will enjoy it, take your time

Early 2020 I started a journey as a content creator whereby I have been writing technical content on Software Development mostly being focused on the Python stack.

In the last 5 months, I began a new journey as an opensource contributor, and up to date I have contributed to 8 different python packages

In this article, I'm going to share my journey as 5 months old contributor and my thoughts on contributing to opensource.

Start of the Journey

The Journey started in December 2020 when Vodacom released their public Mpesa Payment API, As I was looking for a way to integrate with python I came across their implementation for a python wrapper.

I hardly understood it, and usage seems unpythonic to me, I then convinced myself it could be better than that and immediately started my very first opensource project (pypesa) for its re-implementation.

It wasn't easy, a lot of googling and StackOverflow, but eventually, I was able to come up with something that actually worked, and I finally ported it to PyPI. 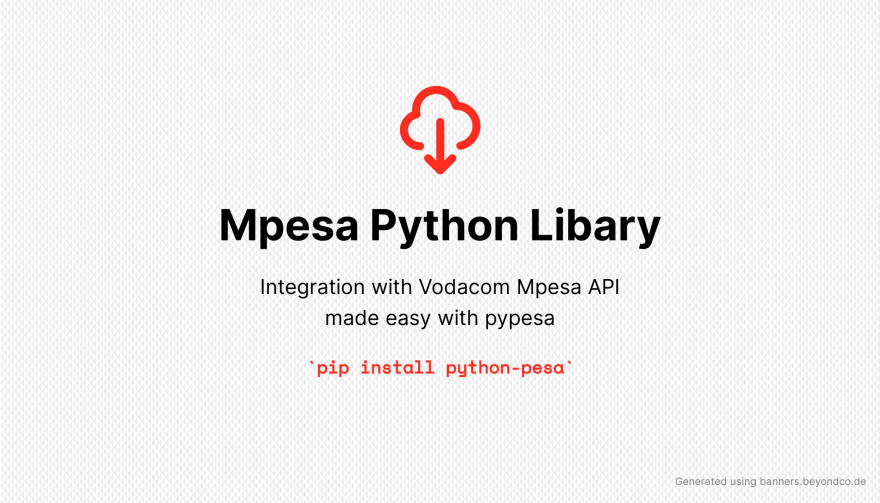 The following are the features that are supported by the Mpesa public API and require the python implementation.

Full documentation can be found on pypesa

into steps shown below.

you can go through getting started Mpesa Developer portal by alphaolomi to see how.

To install the pypesa package to your machine you can either

It now has over 1.9K downloads

It was so fulfilling to me seeing other people using something I crafted and that good feeling lead me to meditate and rethink that I might able to do more to the opensource community taking apart Mpesa package.

For a long time, I have been wishing and admiring being an open-source contributor, inspired by the fact that most software we use today in some ways relies upon OSS whereby people dedicate their time, skills, and effort to build something that we can all use for free.

The same month I started pypesa I opened a new repository titled pyswahili while procrastinating preparing a talk for Pycon Tanzania, envisioning to be the Swahili version of python programming language.

Honestly speaking, I didn't intend to begin working on this project anytime soon but it changed when I saw the repository with a 0 line code gaining stars and people are betting on it and I said to myself I need to make it real.

Well after a couple of weeks I managed to come with an early implementation of pyswahili with a couple of bugs like replacing non-keyword strings, lack of an interactive repl, unstructured packaging.

Recently I managed to port to PyPI and up to date it has been downloaded by over 0.8K

pyswahili is not a completely independent language but more of a swahili version of python language, syntax and language grammar is equivalent to python one with only change of keywords from english to swahili.

There is no official extension for pyswahili, so for now .py is fine.

Similar to Python, Pyswahili supports both modes; the Read-evaluate-print(Repl) loop and Script mode Repl enable you to interactively execute pyswahili code line by line without requiring to write a complete program while on other side Script mode requires you to write your Pyswahili code on a file and run it…

The third package arose when I came across a Github repository consisting of data about all locations data in Tanzania grouped by region as CSV Files.

I then thought how about organizing those data as a python package for easy accessibility and usage when it comes to building a real-life application with it.

which leading creating mtaa, a python package just do that;

If you wanna give a look at the script or interested about building your Json from a similar kind of raw data here is Json Transformer script.

Use pip to install it just as shown below;

Pysimilar came up after a previously published article on how to detect plagiarism in Python using cosine similarity, which stands as one of the most-read articles here on dev.to and multiple platforms I published including my personal blog.

After realizing many people were looking into building something like that, I then thought of building a light python package that will enable even complete beginners to able to build a plagiarism detector in python

How does it work ?

It uses Tfidf Vectorizer to transform the text into vectors and then obtained vectors are converted into arrays of numbers and then finally cosine similary computation is employed resulting to output indicating how similar they are.

Here an example on how to compare strings directly;

If you can't find it, develop and opensource it said opensource, So I did and began developing packages focused mostly on simplifying the integration with the APIS,

What I have learned? and why you should contribute too?

Well, that's all for this article, I'm glad you enjoyed learning exploring my journey as an open-source contributor, to me this is just beginning and I really think you should too.

I am writing a freelance guide e-book for programmers, I need your suggestions

Build and use embedded packages with Luos

Once suspended, kalebu will not be able to comment or publish posts until their suspension is removed.

Once unsuspended, kalebu will be able to comment and publish posts again.

Once unpublished, all posts by kalebu will become hidden and only accessible to themselves.

If kalebu is not suspended, they can still re-publish their posts from their dashboard.

Once unpublished, this post will become invisible to the public and only accessible to Jordan Kalebu.

Thanks for keeping DEV Community safe. Here is what you can do to flag kalebu:

Unflagging kalebu will restore default visibility to their posts.