Your tasks for the sprint are complete, except for one.

And as you sit there, looking at the single item on your task board, there's a gnawing feeling inside you about the whole thing.

You have test anxiety.

You're excited to have the chance to try out automated testing; something you feel has a lot of benefit; but you're terrified you're going to waste this opportunity.

What if you spend all this time setting up your tests, but in the end nothing really comes of it?

There are so many ways it can go wrong:

That's a lot of ways for this testing train to derail.

No wonder you're feeling anxiety about all of this.

I know from personal experience how debilitating these fears can be; and that they aren't irrational to have.

It takes a lot of work to get a good automated test suite built out. It's not something you can do in the course of an afternoon.

Plus, it's really easy to take the wrong path; chasing after endless trails trying to solve a problem that isn't all that important in the long run.

To have any hope in avoiding all of this, the test anxiety and the wasted time, it's important to define what a "good test" is:

Those are my criteria for good tests.

With this list, we can now look test anxiety square in the eye and tell it to shut the hell up.

I'm confident these tests will help, but I also know that trying to test everything is a poor plan.

I'm going to try writing automation and run into issues where it's just not worth the cost of fixing them.

I'm going to be okay burning some of this effort in order to avoid endless rabbit holes of debugging.

To start my test automation effort, I have to think "vertically". 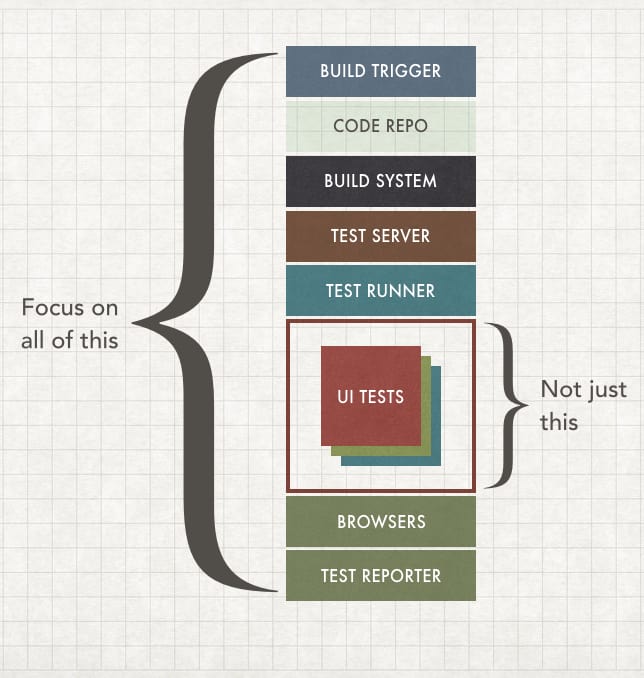 If I started things off writing a dozen tests, they would all fail criteria #2 and #3, increasing the chance they become useless.

Instead, I'm going to zero in on a single test, write it, then fully integrate it into my system before writing any more.

This way I know that one test meets all the criteria of what a "good test" is.

Only then will I get back to writing more tests, which now automatically come with those core "good test" features built in.

I'm skeptical about what tests are worth it

Since I know that I won't be able to test everything, I also know that I need to be selective with what tests I write.

It may be easy to write a test for a simple static page, but I also know that functionality is unlikely to break and usually non-critical.

Instead, I focus on the "money-maker" pages. The user flows that drive life into the business, and would cause major pain if broken (both for the user and the company).

I'll also balance the gain of a test against the pain of writing it.

I'm not saying I won't make exceptions for important pages, but if a page has a lot of dynamic elements that will require weeks of work, I'm going to weigh that cost against how important that page really is.

While test-driven development may work well for unit tests, it's a lot more difficult for UI tests.

I understand that writing UI tests too early can lead to a lot of rework, as these new pages will likely undergo various changes in the first few months of life.

Then, once the new flows have settled out, I can go back and write my tests, confident they will stay.

I won't forget the side-benefits

With all these promises made, I know that there are still no guarantees in life. Technology may fail me, and the support that I had planned on just may not be there.

But I'm reassured in knowing that automated tests have several benefits outside of the automation itself:

In order to write an effective test, you have to know your expected inputs and outputs.

Sadly, many projects can go months into development without someone asking these basic questions.

Mock-ups are made and code is written, yet no one has asked the basic question: "How will the user get to what they need?”

Along that line of thought, tests require you to be straight-forward. In order for a UI test to be successful, you must have a definitive list of instructions for the computer to run.

Because of this, assumptions that the team has made in how the software works are often exposed via automated tests.

Many assumptions are made from an accessibility standpoint. We unknowingly assume a user can visually see a website, forgetting that at least one out of every five people have a physical impairment.

It's easy to define a flow in how you would use the software, but how the user does can be entirely different.

By testing the code outside of the human operating system, you're able to step away from your internal biases and preferences and experience the system from a different viewpoint.

You're simply testing the code more

By running your automation, you're adding extra time that the code has been interrogated, giving your team one more chance to catch that sneaky bug that only appears every 15 runs.

And even if you don't get your automation running, you're still inspecting the code to figure out how you want your test to run. Even doing this can expose hidden flaws or minor bugs that would go unnoticed otherwise.

It's certainly not the most efficient, but it can still be effective.

The key to all of this is remembering the core values of a good test.

This means you'll need to spend time thinking instead of doing. Thinking about what's important to test and how the tests are going to operate in the wild.

It may feel wasteful, but this contemplation can be the key to getting a good start at testing.

If you're suffering from test anxiety, understand the fears behind it and build confidence you can avoid them.

Kevin Lamping
Front-end Engineer and Tester. I have a course at https://learn.webdriver.io and I do free coding tutorials at https://www.youtube.com/user/medigerati/
Not All Tests Are Equal
#testing #programming #webdev
UI Test Automation Is an Awful, Wonderful Thing
#testing #webdev
25 Projects That Changed the JavaScript Landscape over the 2010s (25-21)
#javascript #webdev

Once suspended, klamping will not be able to comment or publish posts until their suspension is removed.

Once unsuspended, klamping will be able to comment and publish posts again.

Once unpublished, all posts by klamping will become hidden and only accessible to themselves.

If klamping is not suspended, they can still re-publish their posts from their dashboard.

Once unpublished, this post will become invisible to the public and only accessible to Kevin Lamping.

Thanks for keeping DEV Community 👩‍💻👨‍💻 safe. Here is what you can do to flag klamping:

Unflagging klamping will restore default visibility to their posts.