Awesome, or awesomewm, is a window manager which comes with a lot of features, right out of the box. It is written in the Lua programming language (almost), but configuring it does not require a lot of knowledge about the same. It is ideal for people starting out with window managers due to the fact that it is shipped with a lot of useful functionality which you would otherwise have to configure separately.

Awesomewm is available on most source repositories. In addition, you can download the release and build it from source.

Awesome is a highly configurable, next generation framework window manager for X.

After extracting the dist tarball, run:

This will create a build directory, run cmake in it and build Awesome.

After building is finished, you can either install via make install:

or by auto-generating a .deb or .rpm package, for easy removal later on:

NOTE: Awesome uses cmake to build. In case you want to pass arguments to cmake, please use the CMAKE_ARGS environment variable. For instance:

When you login, awesomewm already has a default wallpaper set. Along with 9 tags on the menubar. 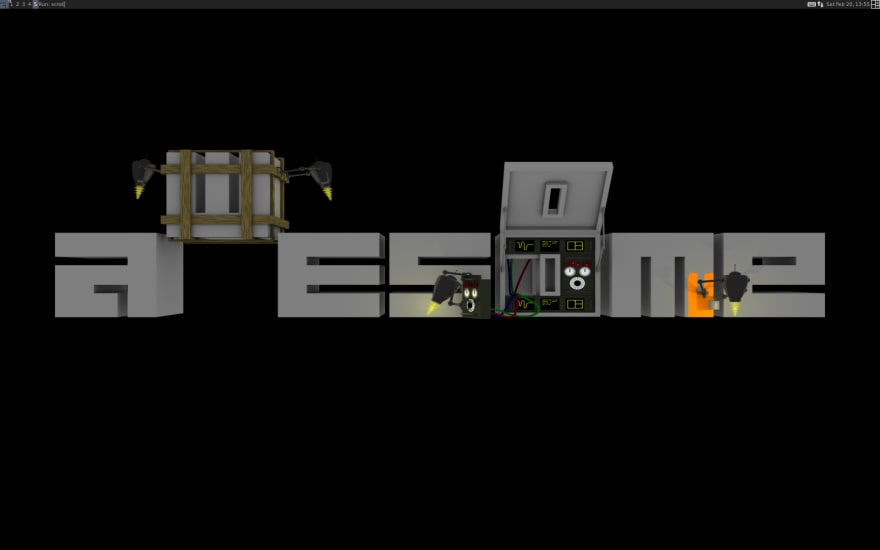 The default modifier in awesomewm is <Win>. To spawn a terminal, press <Win> + <Enter>. To get a list of all shortcuts, awesomewm provides a comprehensive cheat-sheet. Just press <Win> + s to view it. 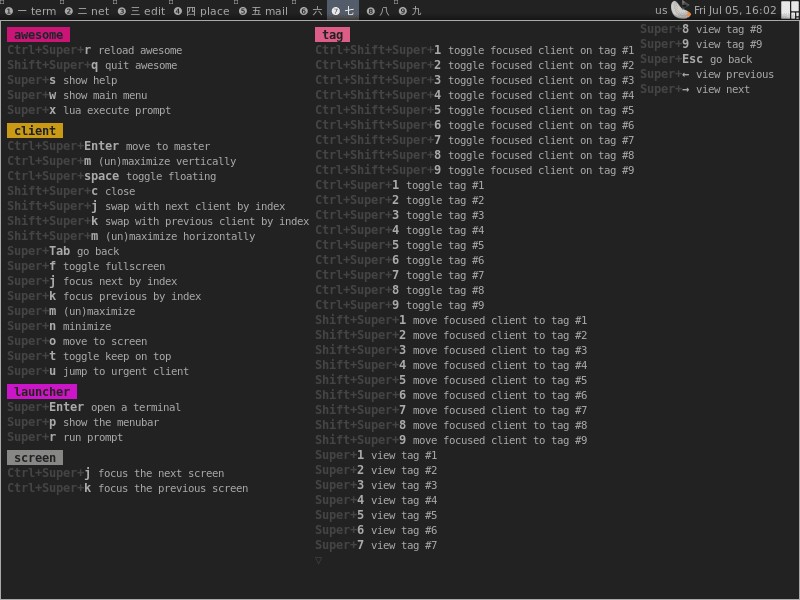 To activate the application menu simply click on the top left corner of the menu bar, or right click anywhere. You will be greeted with something like this: 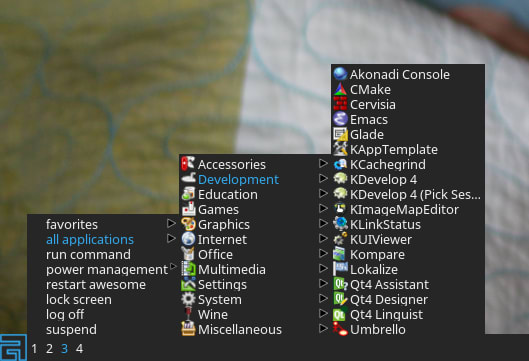 This menu can be used as a quick launcher, and even be configured to hold items which you want. In addition, <Win> + r can be used for spawning a run menu on the menubar. But I prefer dmenu instead.

In awesomewm, the status bar shows the number of active tags. Awesome gives you 9 tags that we can switch between. To do so, simply hit <Win> + [1-9]. For example <Win> + 6 will take you to the 6th workspace. Note that whatever was running on the previous workspace keeps on running there as usual.

Awesome offers different layouts per tag, which can be viewed on the left top corner of the menu bar and can be changed by clicking on the same:

To edit it, simply run the following command for getting started:

After making any changes in rc.lua, awesomewm can be reloaded by pressing <Win> + <Ctrl> + r. In addition, the awesome-client can also be used for the same:

In this blog, we will be configuring the following things:

The configuration file, rc.lua, contains a globalkeys option which is a table that stores keybindings. 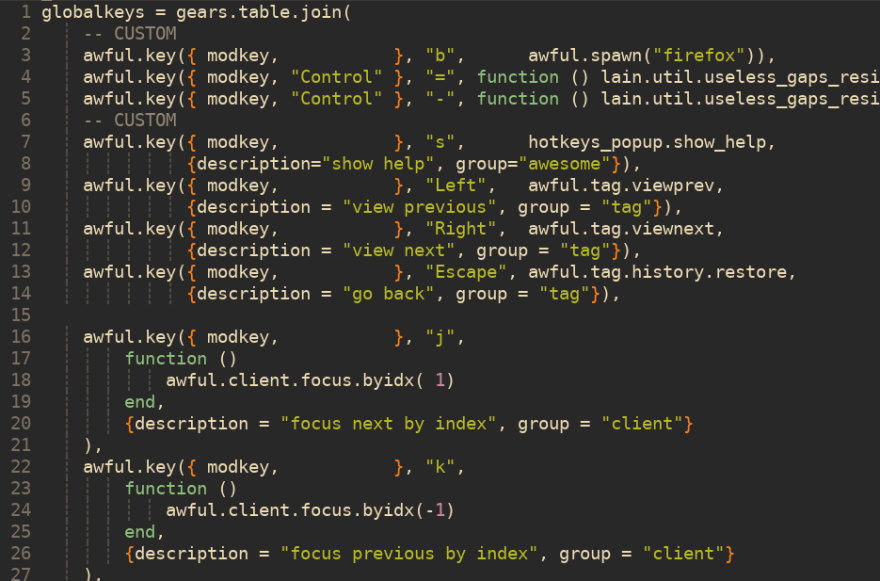 The first section stores the modifier keys, eg: {modkey,}, {modkey, "Shift"} or {modkey, "Control"}. The second part can be used to add keys to be pressed along with the modifier, and the third part is the function to be performed when the particular binding is pressed.

Each keybinding is a part of a group and a description can be provided to go along with them. Adding a keybinding is as simple as copy-pasting the above binding and changing it with respect to what action you want to perform. For example, the following binding spawns firefox whenever I press modkey + b:

You can spawn processes or applications easily by using the following commands in rc.lua. To open these applications on startup, simply add the commands at the bottom of the configuration:

Lain is a library which provides a lot of useful commands for configuring widgets, adding layouts and other useful tweaks. Follow the repository to see how to use lain to its fullest:

Constructive criticism and suggestions are welcome.

If you want to create a pull request, make sure that:

Let us get started by importing lain in our rc.lua:

To add a layout, namely centerwork, defined by lain, simply go to the awful.layout.layouts section and add lain.layout.centerwork. Other layouts can be removed from here, if you want to. The order of the layouts matter! 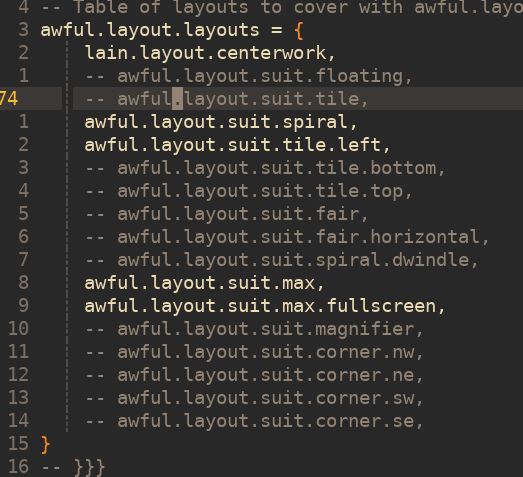 Useless gaps refers to the space between windows that can be added for aesthetic purposes. For example: 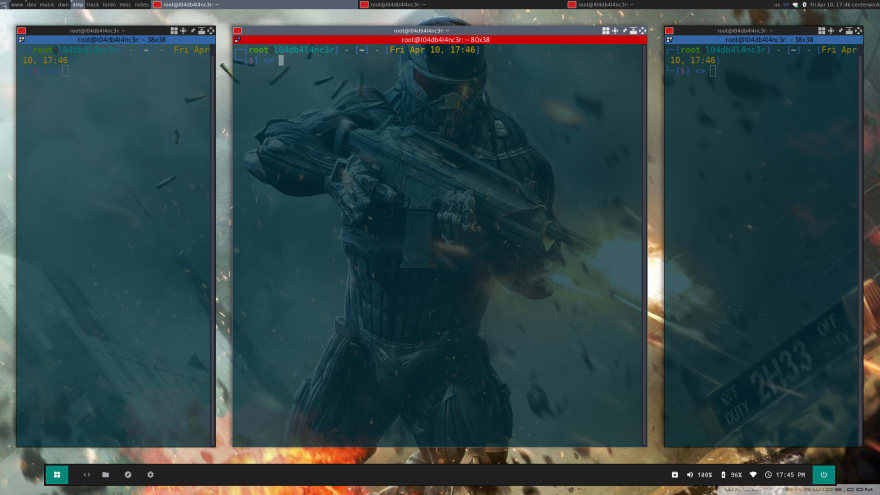 These gaps can be configured at runtime by adding the following keybindings to globalkeys:

These commands will resize the gaps by a factor of 1 pixel every time we press modkey + Control + =|-.

Even though configuring awesomewm is not as easy as i3, it offers a lot of things right out of the box and is easy to get started with. Lua configuration is slightly challenging when it comes to adding additional libraries and trying to keep the code modular but there is a very supportive community and third party libraries for the same.

Awesome is a solid window manager for both beginners and experts, and I highly recommend it for both.

The Advantages and Disadvantages of Working on Open Source Projects