Before you read this.

While re-reading this post, I noticed an oversight in handling the movement controls. I shall address this in a subsequent post.

The GameControlHub instance was then passed to the VrRenderer instance via the VrGlSurfaceView to allow the renderer to process game controls.

This class was based on the Android handling controller actions guide with the following exceptions:

This code only updates the Android device when a stick has changed position, if the stick is kept in the same position then there will be no updates via the onGenericMotionEvent function, to make this usable, I kept a local copy of the last reported position of the sticks as mTranslationMatrix for both the left stick axis and mPitchDelta for the right stick's up/down axis and mYawDelta for the right stick's left/right axis.
Whenever the getLatestTranslationMatrix function is called, I simply return a copy of mTranslationMatrix.
Whenever the getLatestRotationMatrix function is called, the current mPitchAngle is adjusted by mPitchDelta, making sure it is capped at looking directly up or directly down and mYawAngle is adjusted by mYawDelta, making sure to wrap the angle from 360° to 0° for incrementing angles or 0° to 360° for decrementing angles.
These new values of mPitchAngle and mYawAngle are used to generate the rotation matrix which is returned.
When calculating the rotation matrix, the mPitchAngle is rotated first, as the pitch won't be skewed by a subsequent yaw rotation but a yaw rotation would be skewed by a subsequent pitch rotation.

Doing something with this control input

Now that we have a method of receiving control input from the player, what are we going to do with it?
Initially we are going to move the camera position and look direction.
To do this we need to add a function to the GameCamera class to allow adjustments to the position and we need to finish off the setCameraRotation method.
The adjustPosition function is pretty simple and just adds the passed x, y and z delta's to the current x, y and z positions. 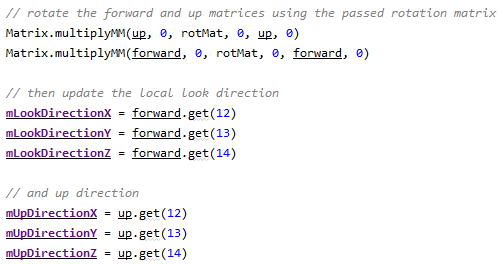 Once all this was implemented I added a few extra triangles to the scene so I could get a better sense of how I was moving around.
The Source code at this point of the process has been captured in pre-release B1.3 on Github.

Next, I plan on implementing a skybox/cubemap to add a bit of background to the scene, this is not something I have done before but sounds pretty straight forward, I also plan on adding some more complex models and some lighting effects to the opengl shaders.

5 Successful Food Delivery Apps in Canada to Get Inspired from

How to implement charts in android using java