Determining where the player leaves the tile

As I plan on using this in multiple places I created a function which takes the start and end points of two lines and returns the position that the two lines intersect.

I know some people do not like putting TODOs in comments but for me it is a great way of keeping in the flow of coding without forgetting some of the smaller things which I can see will need tidying up or fixing.

As can be seen in the comments above, this function does not check if the lines are parallel, there would be a division by zero if they were, which would crash the application, but as the function is only called to get the intersection point after checking that the two lines intersect, I shall add a TODO in the comments to remind me that there should be a check in for 0.0 value divisor.

Calculating where the player ends up on the tile map

This is where things got complicated, so far I have only catered for the player moving up, down, left or right and not diagonally in any direction.

The general flow of processing the player movement goes like this: 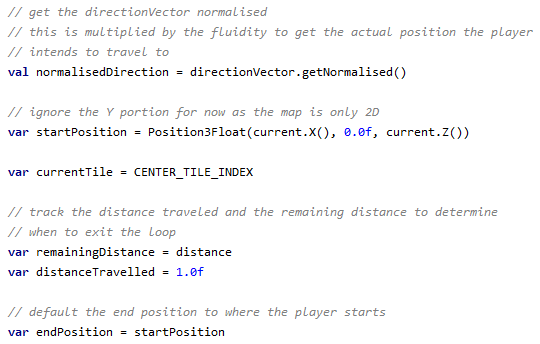 Hopefully the comments explain what each variable here is for, some additional things to note are:

This loop repeats while the player can still move and is still moving.

Calculating where the player would like to move to

This takes the remaining distance and applies the fluidity of the current tile to work out how far the player will travel along this tile, it then multiplies the distance by the normalised direction vector and adds it to the start position to calculate where the player would end up.

Does this take the player to a new tile? 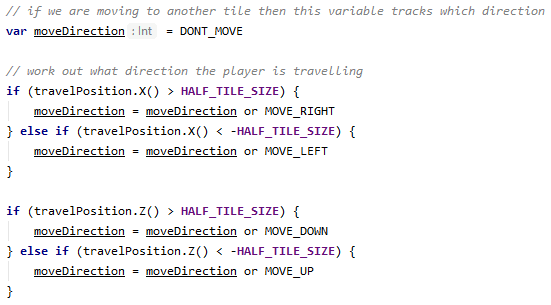 This code is similar to the existing code for checking for tile changes.

Finalise where the player moves to on this tile 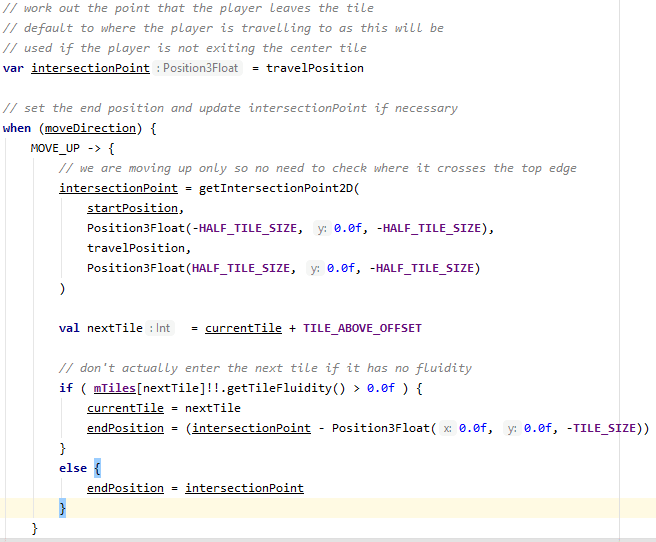 This is performed in a big when statement to allow each direction to be separate, at the minute, because I have not coded the diagonal transitions yet, the process is similar for each direction:

This does give a slight overlap between one tile and the next, e.g. any point at the edge of one tile is also technically on the edge of another tile as well.
Whether this is of any consequence remains to be seen.

Update the distances traveled and remaining

Updating the TileMap after applying the player movement

If the tile which the player is on has changed, the center tile is updated to be the new tile and all other tiles are reset based on this new center tile.
Then all the tile offsets are reset as before.

This update took me a while to get motivated to start but once I did it came together quite nicely.
I should now be able to create a complete level which the player can move around consistently.

The code at this point of the project can be found here.

Stay Safe and Happy Coding.
Until next time,
Graham

Android Jetifier — Can we say Bye-Bye yet