This post was first published on CoderHood as How I Fixed My Carpal Tunnel Pain. CoderHood is a blog dedicated to the human dimension of software engineering. 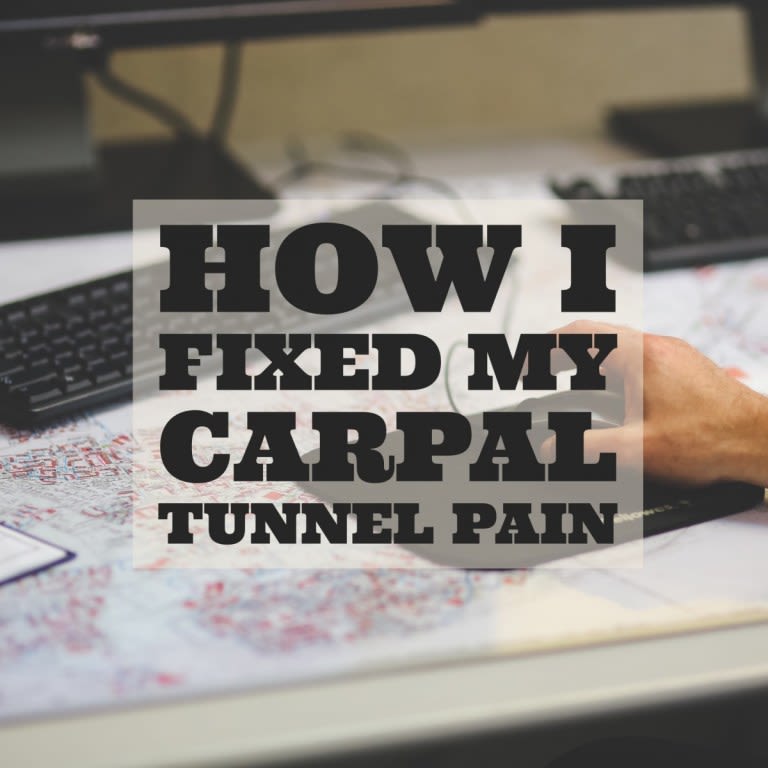 Software Engineers spend the majority of their work hours sitting in front of a computer, typing on a keyboard or moving a mouse. At work, we don't lift heavy things or climb on ladders, and there aren't many job injuries caused by writing code. The most common ones I have seen are lower-back problems and wrist problems.

I am not a doctor, I know nothing about medicine, and I am not qualified to give any medical advice. However, I have been around developers all my life and I have seen many of them suffer from back pains due to sitting all day.

Then there is Carpal Tunnel Syndrome.

There is another issue that can make your developer life very difficult, and even get in the way of your career. It is the infamous Carpal Tunnel Syndrome or CTS. There are many causes for this condition, some behavioral and other metabolic. For developers, the most common one is repetitive maneuvers due to working with a keyboard and mouse all day.

I am right handed, and I had carpal tunnel issues on my right wrist for at least 20 years; maybe longer. It was a pain. Literally. My thumb, index finger and middle finger would go numb whenever I did anything repetitive with my right hand. For example, working with tools in my workshop, painting, writing, and drawing. In other words, many things that I like to do in my free time.

For the longest time, I didn't know what it was called and didn't pay attention to it. Then, it got worse and hard to ignore.

It Got Worse Over Time.

In the last few years, things started getting worse. My hand would go numb anytime I would raise it above my head for more than 10-20 seconds. Sometimes it would go numb at night, and other times for no reason whatsoever.

I grew tired of it and tried many different things to fix it. Pain relief topical medications, splints, compression gloves, pain killers, massages, ice, heat, you name it. I spent hundreds of dollars trying everything I could try.

Finally, I found two products that resolved the problem for me.

When I bought thisÂ poorly named product, I was at the end of my list of stuff to try. This thing seemed way too simple, and the $25 price tag too steep, for a piece of plastic attached to a strip of velcro. Regardless, I was on a mission to resolving my wrist issues without surgery. I had to try it, and I ordered it from Amazon.

When I received it, I laughed. It is a very simple plastic bracelet, and it was hard to believe it would do anything. I am not sure what I was expecting given that it is exactly as described on the Amazon product page. I decided to get past my disbelief, and I wore it 24/7 for a couple of weeks. I never took it off, even if the instructions recommend keeping it on during the day and taking it off at night.

Since then I haven't had any symptoms of CTA. I can raise my hand over my head for extended periods, type, write, use the mouse, work in the workshop, paint, draw, and do anything without feeling any numbness or discomfort. It has been a lifesaver, and it increased my quality of life. I wore it 24/7 for several months, and I never felt like it restricted my movements.

I took it off a few months ago when it started causing a mild skin irritation. That should teach me to follow instructions, but it probably won't. Regardless, the pain has not returned. I am sure it will in the future, but at this point, I know what to do if it does. I'll put the bracelet back on, and maybe I'll even take it off at night. Maybe.

Since I am a geek, I had to know how this simple contraption works. I found the answer reading the bracelet's patent (US5385537). The ugly technical drawing included in the patent documents shows the concept: 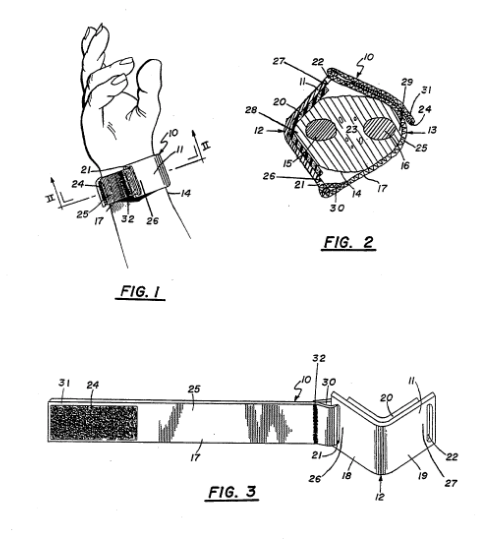 For details, I encourage you to read the patent. Since I know you won't (hey, we are engineers!), let me give you a quick summary. The idea is simple: Referring to Fig. 2, when you have CTS your Median nerve (23) is squeezed between the Radius (15), the Ulna (16), and the Transverse Carpal Ligament. The ligament is not indicated in the figure, but it is a band somewhere between the Median nerve (23) and the wrist (14).

The following image shows the hand numbness in red and the Transverse Carpal Ligament on the rightmost hand drawing.

When the bracelet is around the wrist, it applies pressure in strategic spots and brings the Radius and the Ulna closer to each other. That pushes the Transverse Carpal Ligament further away from the Median nerve and the bones, relieving the pressure in the Carpal Tunnel.

Straightforward and efficient. And yes, probably a bit overpriced, but... oh well. It works, and I would have paid any amount of money to get that problem resolved without surgery. 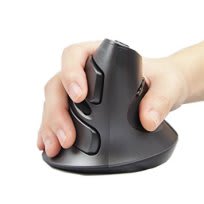 The M BRACE RCA was great to remove the pain from my wrist, but I still wanted to find a way to eliminate the behavioral cause of my CTS. Since I had issues only with my right hand, I speculated that the constant use of a mouse --- I am right handed --- was to blame. To resolve the problem, I purchased a vertical mouse to change my wrist position to something more natural, or at least different.

There are many vertical mice on the market. I went with theÂ J-Tech Vertical MouseÂ which is an inexpensive option with good reviews on Amazon. It took me a few days to get used to it, but it grew on me, and now I like it a lot.

I believe that the M BRACE RCA is what removed the pain from my wrist, and allowed my carpal tunnel inflammation to subside. I also believe that using the vertical mouse has helped to keep the inflammation away, even after taking the bracelet off.

If you suffer from CTS, I strongly recommend giving it a try. It helped me, and I am hopeful that can help you too.

10 Questions I'm Asking All Companies Before Scheduling Any Interviews