I believe if you are reading this, you must have heard about the famous event loop that Node.js has, how it handles the concurrency mechanism in Node.js and how it makes Node.js a unique platform for event driven I/O. Being an Event driven I/O, all of the code that is executed is in the form of callbacks. Hence, it is important to know how and in what order are all these callbacks executed by the event loop. From here onwards, in this blog post, the term 'event loop' refers to the Node.js' event loop.

The event loop is basically a mechanism which has certain phases through which it iterates. You must also have heard about a term called 'Event Loop iteration' which implies an iteration of event loop over all of its phases.

In this post, I will be going a bit at showing you the lower level architecture of event loop, what all its phases are, which code is executed in which phase, and some specifics and lastly some examples which I think will make you understand better about event loop concepts.

Following is the diagram of what all phases an event loop iterates through as per their order: 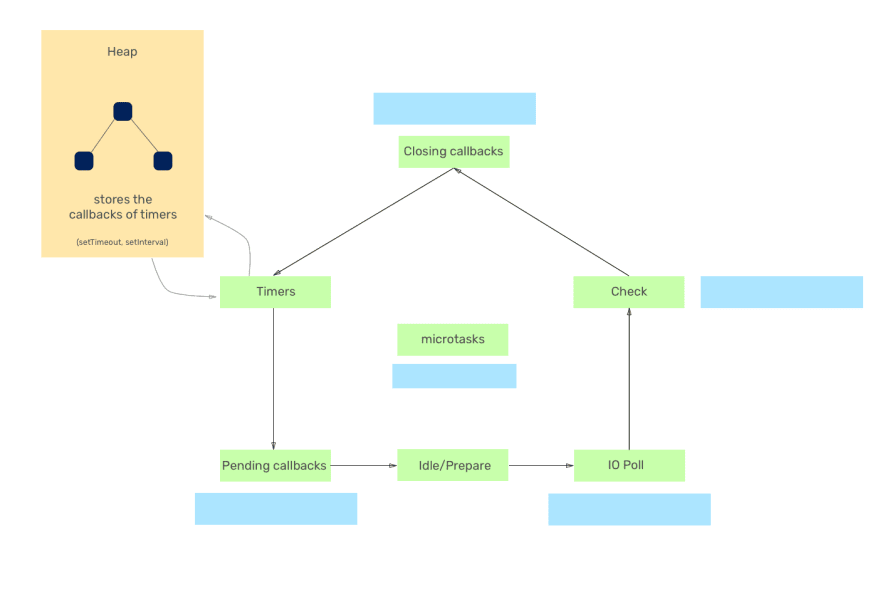 Each of the phases has a queue/heap which is used by the event loop to push/store the callbacks to be executed (There is a misconception in Node.js that there is only a single global queue where the callbacks are queued for execution which is not true.).

Apart from all these, there is one more microtask queue which contains callbacks associated with process.nextTick which we will see in a bit.

Let us start with a simple example to understand how the following code is executed:

Let us recall the event loop diagram and combine our phase explanation with it and try to figure out the output of the above code:

When executed with node as an interpreter, the output of the above code comes out to be:

Note: The above output can be reversed too i.e

since the event loop doesn't execute the callback of setTimeout(fn, 0) exactly in 0ms time. It executes the callback after a bit of delay somewhat after 4-20 ms. (Remember?, it was earlier mentioned that the Poll phase controls the execution of the timer callbacks since it waits for some I/O in the poll phase).

Now, there are two things which happen when any JavaScript code is run by the event loop.

One more example or let's say there is a misconception in Node.js that setTimeout(fn, 0) always gets executed before setImmediate, which is not at all true! As we saw in the above example, the event loop was in the Timers phase initially and maybe the setTimeout timer was expired and hence it executed it first and this behaviour is not predictable. However, this is not true always, it all depends on the number of callbacks, what phase the event loop is in, etc.

The above code will always output:

Let us see how the above code is executed:

Remember, when the event loop starts executing the callback of fs.readFile, it is in the I/O phase, after which, it will move to the Check(setImmediate) phase.

Let us consider one more example:

Before we see how the event loop executes this code, there is one thing to understand:

The process.nextTick comes under microtasks which are prioritised above all other phases and thus the callback associated with it is executed just after the event loop finishes the current operation. Which means that, whatever callback we pass to process.nextTick, the event loop will complete its current operation and then execute callbacks from the microtasks queue until it is drained up. Once the queue is drained up, it returns back to the phase where it left its work from.

Here is the output of the above code:

Consider one more example, this time we are passing an asynchronous callback to one of our process.nextTick.

The output of the above code snippet is:

Now, here is what happens when the above code is executed:

Thus, as you saw the various states of event loop, its phases and most importantly, process.nextTick and how it functions. It basically places the callback provided to it in the microtasks queue and executes it with priority.

Following gif indicates how does the event loop execute the above code:

The above code will output:

OR, it can also be (remember the very first example):

So, there is a thing in Node.js or say v8 to be accurate called 'Microtasks'. Microtasks are not a part of the event loop and they are a part of v8, to be clear. Earlier, in this article, you may have read about process.nextTick. There are some tasks in JavaScript which come under Microtasks namely process.nextTick, Promise.resolve, etc.

These tasks are prioritised over other tasks/phases meaning that the event loop after its current operation will execute all the callbacks of the microtasks queue until it is drained up after which it resumes its work from the phase it left its work from.

Thus, whenever Node.js encounters any microtask defined above, it will push the associated callback to the microtask queue and start the execution right away(microtasks are prioritised) and execute all the callbacks until the queue is drained up thoroughly.

That being said, if you put a lot of callbacks in the microtasks queue, you may end up starving the event loop since it will never go to any other phase.

Tasks such as setTimeout, setInterval, setImmediate, requestAnimationFrame, I/O, UI rendering, or other I/O callbacks come under the macrotasks. They have no such thing as prioritisation by the event loop. The callbacks are executed according to the event loop phases.

I hope you enjoyed this article. If you have any questions regarding the topic, please feel free to ask in the comments. I will try to answer them with the best of my knowledge. I am, by no means, an expert in Node.js but I have read from multiple resources and combined the facts here in this blog. If you feel I have mistaken at any place, please feel free to correct me in comments.

Thanks a lot for reading.
Feel free to connect with me on Twitter/GitHub.

Once suspended, lunaticmonk will not be able to comment or publish posts until their suspension is removed.

Once unsuspended, lunaticmonk will be able to comment and publish posts again.

Once unpublished, all posts by lunaticmonk will become hidden and only accessible to themselves.

If lunaticmonk is not suspended, they can still re-publish their posts from their dashboard.

Once unpublished, this post will become invisible to the public and only accessible to Sumedh Nimkarde.

Thanks for keeping DEV Community 👩‍💻👨‍💻 safe. Here is what you can do to flag lunaticmonk:

Unflagging lunaticmonk will restore default visibility to their posts.