Picture this: you've got yourself a pretty whiz-bang component, not just any component, but that classic component that seems to just exist on every page... You know the header, or the authenticated state in that header, the CTA on the homepage... You get the gist. Up until now, you've probably been code sharing by simply sharing that component as an npm package, where you then build and deploy every application independently. Which seems reasonable, but there has always been something not quite right.

Now if you are anything like me, you've felt the pain when a designer asks you to change the border, or the background colour of that whiz-bang component. And you are dreading the deployment of having to now build each and every one of those apps. Maybe you will get lucky and it will all go smoothly, but probably not. You are impacting uptime perhaps, or maybe you are statically generating, and now your back-end gets hammered as you rush to get each of your 250k permutations built quickly to get this change out (personally, I've been there).

Module Federation aims to solve the sharing of modules in a distributed system, by shipping those critical shared pieces as macro or as micro as you would like. It does this by pulling them out of the the build pipeline and out of your apps.

To achieve this there are two main concepts to get your head around: the Host's and the Remote's.

A host is an artifact that can be loaded cold. Typically, the one that usually initializes from the window.onload event. A host app contains all the typical features from a SPA, or SSR app. It loads all the initial chunks, boots the app and renders what the user will see first. Now the main difference here is, instead of having that infamous super shared component even remotely bundled, it is referenced. Why? Because that component lives as part of the Remote!

You see, the beauty of this approach is that you can can have the critical JavaScript required to load that first app, and only the required; speaking true to the micro-frontend (MFE) philosophy.

A remote can both be a host or strictly a remote. A remote's job is to offer up, or rather expose modules that can be consumed by other Host's and Remote's.

You can also opt this remote into having some (or all) of its dependencies shared in the sense of; if the host already has react, just send it into this runtime, allowing the remote to not have to download its own copy of react. 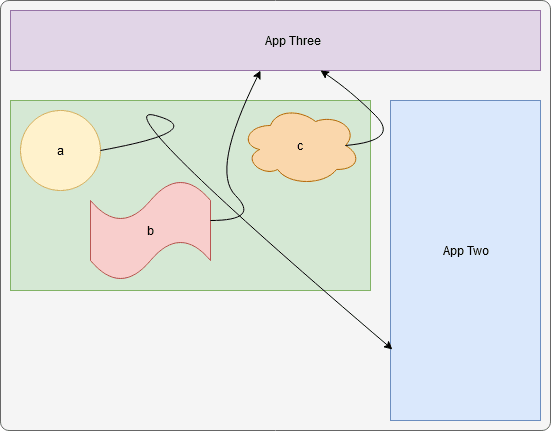 To make things a bit simpler, and more uniform; we have a:

But most of the time, you will want your apps to both expose and/or consume federated modules.

For this, we have a plugin to rule them all!

What you see up there is an app that can host its own copy of react, react-dom and relay, exposes its own AppContainer — but then has the ability to import the Title from app_one, and have the host share the dependencies, react, react-dom and maybe relay-runtime with that remote. Which means loading in that remote will only download the code needed to power that component, and NONE of the shared modules.

What this will allow you to do in practice is have each one of your MFE's expose its route-map, typically the component fragment that you'd give to react-router.

Marking that routes.jsx file as an exported member of the AboutApp, and AboutUserApp within their respective webpack configs.

and voilà you have yourself a lazy federated application!

whereby; the about app, and about user app are both loaded from their respective bundles - but act like they were all bundled together in the first place!

That's not all, what if you could also now wrap that router in a AppContainer, where you'd typically share headers and footers!

Boom! You have yourself an application that;

Think about the possibilities: you could share your design system so you could change the background colour of that component we spoke about, and effectively have all your things evergreen across your entire system! You could share the CTA that sits at the bottom of every article. What about that cross-sell component you'd like placed on the checkout and the product pages? Effectively endless.

Now this all sounds amazing right? But there are few draw backs.

The community has an amazing response for which Zack and myself (Marais) want to thank you all so much for assisting us, and shedding light to so many potential corner cases, and use cases which we are opening investigation as we grow this technology!

MicroFrontend solution of official webpack will come 😗😗😗
so excited and keep tracking
github.com/webpack/webpac…

Joel Denning author of SystemJS — for navigating us through the SystemJS space, and enlightening us about the world if importmaps, as further investigate dependency url resolution, which is fairly manual at the moment.
Tobias Koopers for webpack, and giving us such an amazing foundation to build this upon, and ultimately helping us carve the code needed to actually bring this concept into a reality.
AutoGuru for giving myself the space to create and experiment with this!

Photo by Daniel Fazio on Unsplash

Marais Rossouw
Hi, my name is Marais and I'm a polyglot developer, but you'll mainly find me around the JavaScript space. I love open source, and someday wish to be able to do it full time.
Scene Based Applications
#javascript #react #webdev #architecture
Relay and SSR using createOperationDescriptor
#react #relay #ssr