What is Docker and Linux Containers?

Linux containers are a way of virtualization that has been around since quite some time already. Compared to the classical “Virtual Machine” like VMWare, VirtualBox etc that are bulky and heavy to run, containers are lightweight, much smaller and they share the host’s kernel. That is, X number of small isolated Linux systems (containers) can be run and controlled within host’s Linux kernel. Those containers are able to run “applications” (web server, DB, domain apps, mail server, monitor tooling, whatever). This yields a much better optimization of hardware resources, control, etc.

Docker went a bit further and give us a tool for managing applications that run on top of containers. It eases the tasks for creating, deploying and maintaining containers. What is funny for us (Smalltalkers) is that Docker introduced again the concept of “image” (Hey, Docker don’t steal from us, that word is ours!!!!). And guess what? It’s the same idea. It’s basically an executable result of running some instructions to build and run an application. Then, when Docker runs that image, it “becomes” one (or more) containers.

Here is a nice summary of what I just tried to explain above.

Why is Docker relevant for Smalltalk?

Some of the Docker features don’t sound so surprising to us. However, there still are quite a few:

Obviously, I think that the answer (“why it’s relevant?”) would depend a lot to whom you ask: a developer, a sysadmin or a DevOps.

How to Dockerize a Smalltalk application?

The first thing you must to is to create a Dockerfile for your application what would specify all what your Docker image/container will need. Normally, you don’t start from scratch but from existing images. Dockerhub is the largest library of existing images. Of course, there are others too.

Some weeks ago, some customers from Instantiations where inquiring about using Docker with VASmalltalk. And so, with the help of a few folks (thanks Julian Maestri and Norbert Schlemmer!) from the community we got some ready-to-go-examples on github.

Wondering how to run @VASmalltalk with @Docker on a @Raspberry_Pi ? Check out forum.world.st/ANN-Running-VA…. Thanks @Noschvie and Julian Maestri for your help! @instantiations

The example on github is a Seaside web application that simulates a Traffic Light. It’s a very simple example but enough to show several features. Note that the .icx image size is only 3.5MB and it allows stack dumping, remote debugging, etc etc (topics for future posts).

The web application is running under port 7777 and so you get to it from a web browser in a similar way to this: http://yourhostname.local:7777/trafficlight

And to make it even more funny, our host (where Docker was running) was not a regular PC with Linux but a Raspberry Pi 3B+ running Raspbian Linux :) However, the same example should work for any regular Linux and x86 too. Anyway, the entry point for all the details is here.

As you can see there are multiple docker\* files. This is because we experimented with different OS and flavors. The one we are currently using is debian_slim_Dockerfile which looks like this:

Important points of this file:

The bash script is as simple as invoking the Smalltalk VM and passing the image and ini files are arguments:

How to run with Docker now?

The obvious first step is to have Docker installed. Google is your friend.

OK, we have the Dockerfile and Docker working. What do we do now? The first step is to “build” an image out from that Dockerfile and second, to run it (which will mean a container running). This is how you could do it:

And that’s all. You should have created an image and started a container running it.

Something very important: Docker containers are NOT persisted. What does it mean? That whatever you write into the container, will be erased/lost as soon as the container is shutdown. There are many ways to add “persistency” but it depends a lot on what you need.

Useful commands to confirm our steps are docker images and docker containers ps. See image below:

Important: Notice that the size of the container is just 71MB. I think it’s quite good for a starting point.

And obviously you should see the Traffic Light up an running: 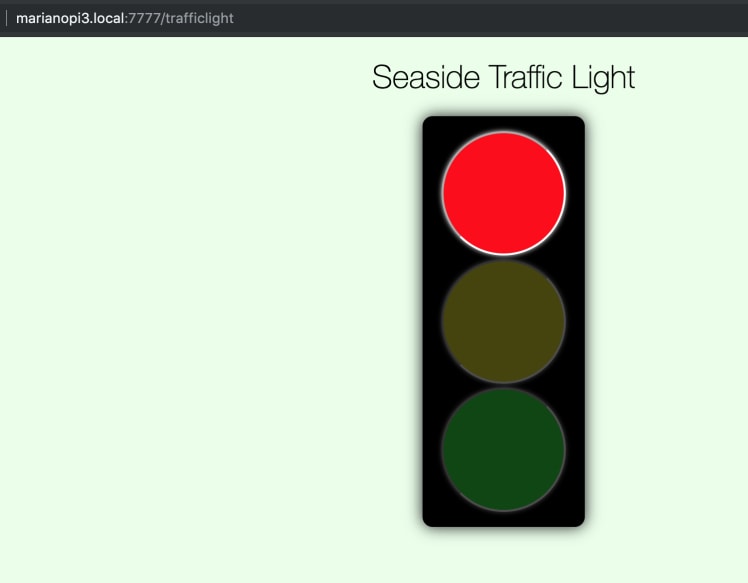 Something very useful is to read from stdout or some other possible log that the app running in the container may have written. For that you can do docker logs -f 6f7bc37b14e6 (where 6f7bc37b14e6 is the container ID you want to check). Example: 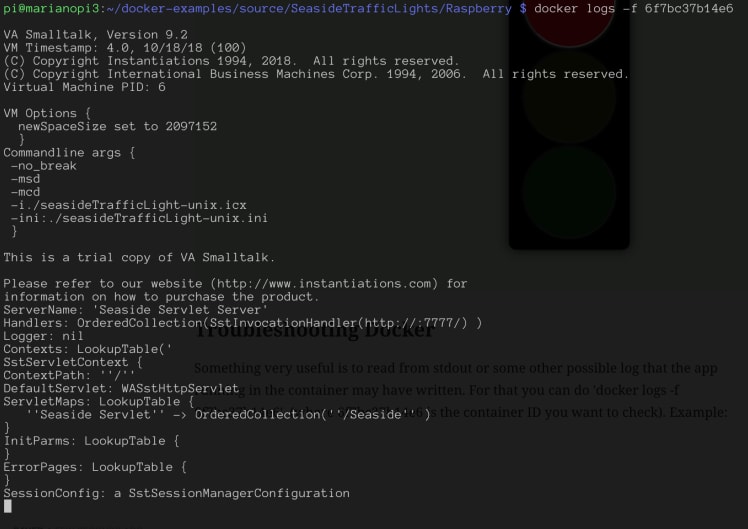 The other very useful thing is to run a interactive container for a given image. For example:

So…basically you can open an interactive bash inside your container!!!! This is VERY useful.

Here are a list of the most useful Docker commands in case you wanna explore further (like how to stopping and removing containes, etc etc).

With the regular docker command you can actually run one container at a time and in a single node. But, the joy of this is to have X containers split across Y nodes, right? So… below is a teaser of my next post on this subject: