(The title uses uppercases for referring to HTML elements, because the use of < and > for the title screws up how the title is displayed on Dev.to...)

This article may be provocative. Let me know what you think.

Imagine you need to build a web site with a top app bar like this one (source: Material Design):

And tapping the hamburger menu button on the left will open a navigation drawer (source: Material Design): 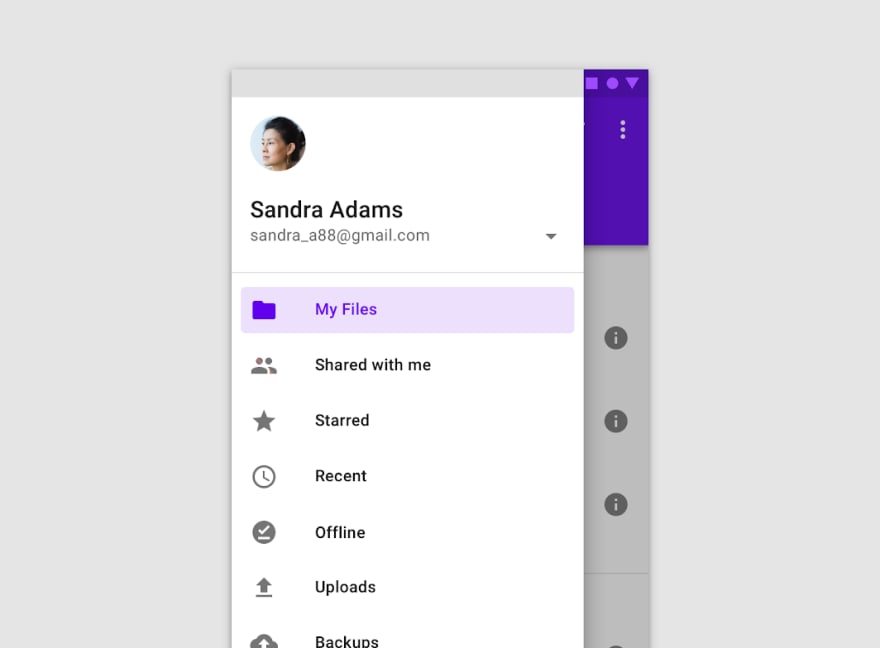 How would you mark up an HTML document for this trio of (1) top app bar, (2) menu button, and (3) navigation drawer?

Given the standard practice of nesting <nav> inside <header> and the visual appearance of nesting the menu button inside the top app bar, my first instinct was:

However, learning about accessibility, especially about landmark roles, my conclusion is:

where the outer <div> will be styled as the top app bar, and <ul> will be styled with position:fixed, hidden initially, and toggled to be visible with the clicking of <button> (with aria-expanded turned into true).

Do you wonder why? Read on.

Both <header> and <nav> are associated with landmark roles. To understand the best use of these elements, we need to know what landmark roles are.

There are 8 HTML elements with landmark roles (MDN Contributors 2021c).

The last two in this list require some footnotes.

My understanding is that a web developer should assign one of these 8 roles to each and every segment of a web page, to help screen reader users figure out the overall structure of the page.

The best explanation of landmark roles that I've found is Faulkner (2013), cited by Coyier (2013), with a description of how a screen reader (JAWS version 10 and above) behaves with landmark roles.

The screen reader allows its users to cycle through landmarks with ;, the semi-colon key. Then pressing the arrow down key will move to its child elements.

This is why all the contents on a page should be the children of a landmark role element, as Schwerdtfeger (2013) comments:

Probably the most important rule for applying landmarks is to ensure all content resides in a landmark region to ensure no content is orphaned. This way a screen reader user can safely use landmark navigation without missing content.

This has a big implication of whether <nav> should be a child of <header> or not.

Given how screen readers behave with landmark elements (as described above), if we have <nav> inside <header>, a screen reader user won't notice the presence of <nav> unless they decide to see the content of <header>.

Once I learned this, I understand why MDN Contributors (2021b) have written the following passage for <nav>:

Many web designers consider the navigation bar to be part of the header rather than a individual component, but that's not a requirement; in fact some also argue that having the two separate is better for accessibility, as screen readers can read the two features better if they are separate.

It seems to be a consensus among web developers that nesting <nav> inside <header> is neither necessary nor anti-pattern (e.g. Devlin 2011).

But I personally vote for NOT nesting <nav> inside <header> for the purpose of a better user experience with screen readers.

Now the question is where to place <button>. Inside <header>, inside <nav>, or outside both?

Initially, I didn't really understand this statement. Once I learned about landmark roles and how screen readers behave with them (as describe above in this article), however, I now fully agree.

But it seems that this practice is not widely accepted.

By doing this you clearly mark the boundries of the content that is displayed when you click the button...

I initially took the side of Gunnarsson (2020) rather than Lazaris (2020), who didn't revise his article in response (though Gunnarsson's other suggestions were taken). Once I learned about landmark roles, however, this counter-argument isn't convincing enough because it doesn't refer to accessibility. It just relies on logic.

This article is a working draft. It's more for seeing whether other people agree or disagree, rather than for claiming that this is the way to go. Let me know if you think I miss something important.