For the last few days(9 to be precise) I have been collecting some public data with the help of Dev API. My motive behind this was to see some natural behaviors of posts and the authors at Dev.

For that, I wrote a simple Python script that would collect the data of the top 50 dev posts each day and send it to my email at a specific time each day for 7 days a week. I deployed the script at Heroku and started receiving the data from the very moment I deployed it. After collecting data of 9 days, I took the data of the latest 7 days and made some quick analysis.

And now, I am happy to share the data with you guys today.

SPOILER ALERT: Probably the most useful piece information is in the bottom

Relation between reactions and comments

Point to be noted: It's not necessary that the post with 243 reactions will have 45 comments and vice versa. 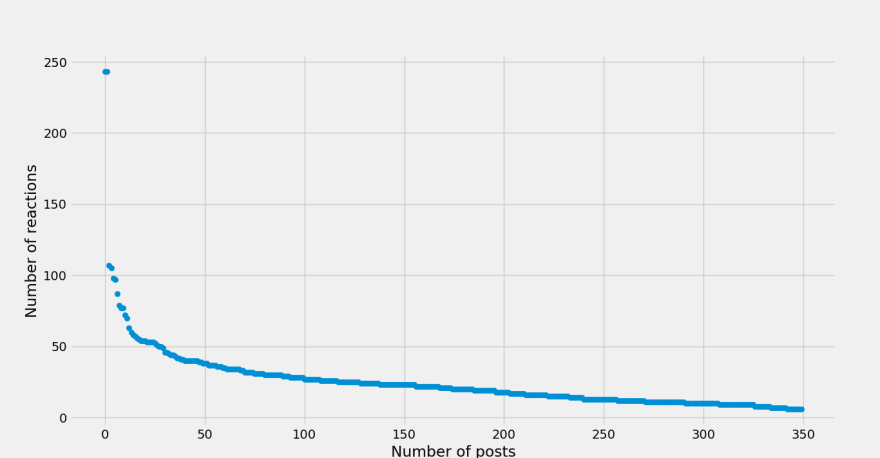 As the table informs, the maximum post-reaction is 243, the average is about 20 and quite a small amount of posts have reactions near to 5.

Now the graph for comments. 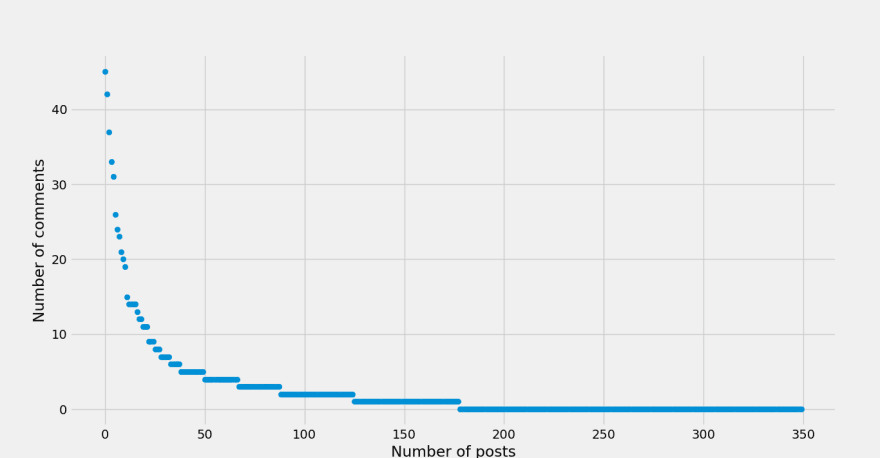 Not a significant difference in comparison to the graph of the total number of reactions.

But the scenario changes as we combine the scatter plot for the number of reactions and number of comments together. 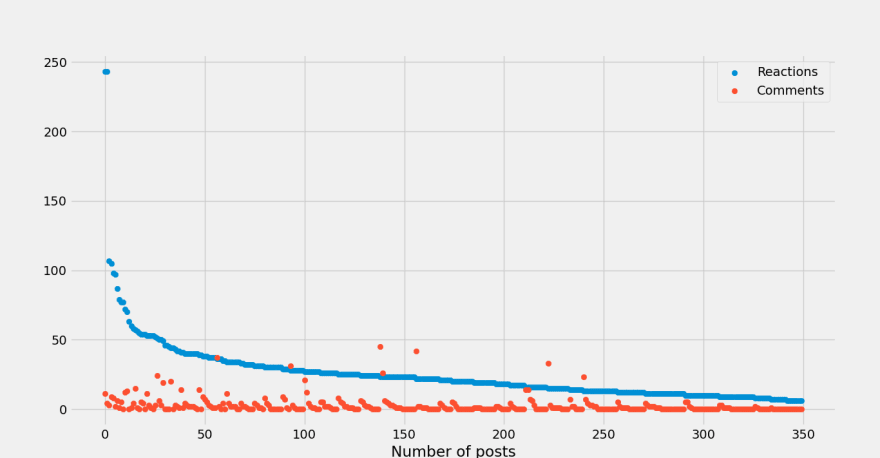 Here is a more detailed graph chart split into days for a more comprehensive comparison. 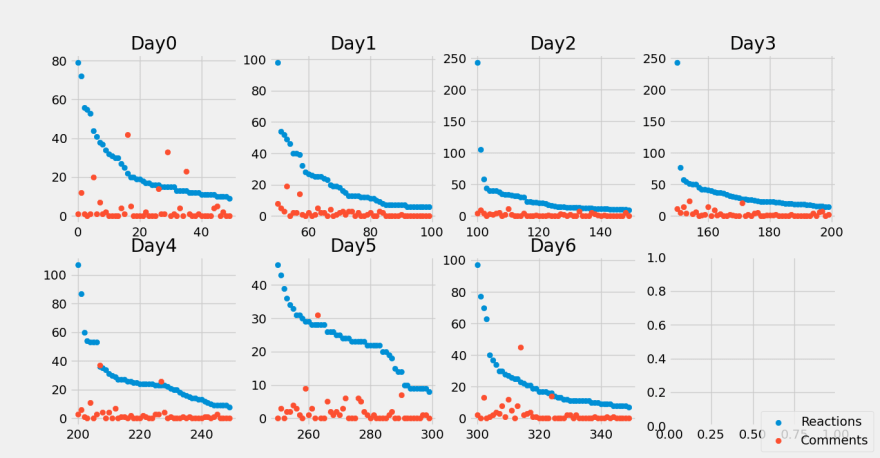 Let's see the details in 6 different categories to answer the following 6 questions.

Crossposted means, the post was published on a different website and its main origin is not from Dev. 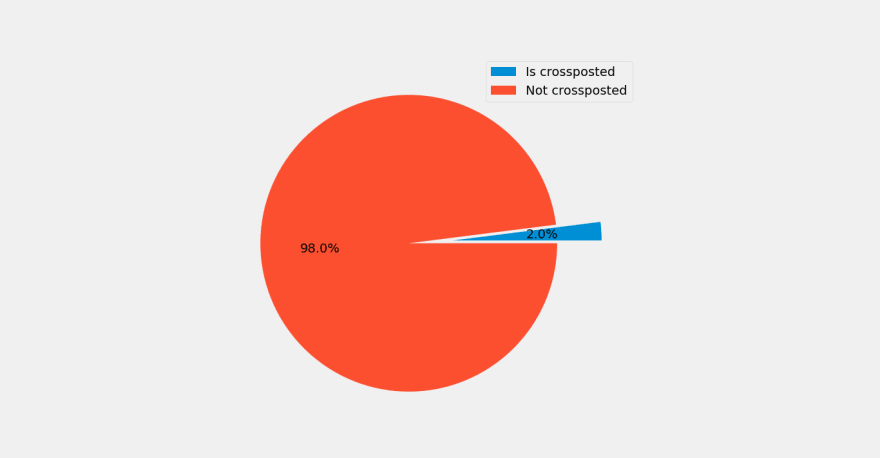 Wow! Almost all the posts of Dev aren't crossposted. That means people prefer to write posts at Dev rather than just copying and pasting it. Isn't that good news? 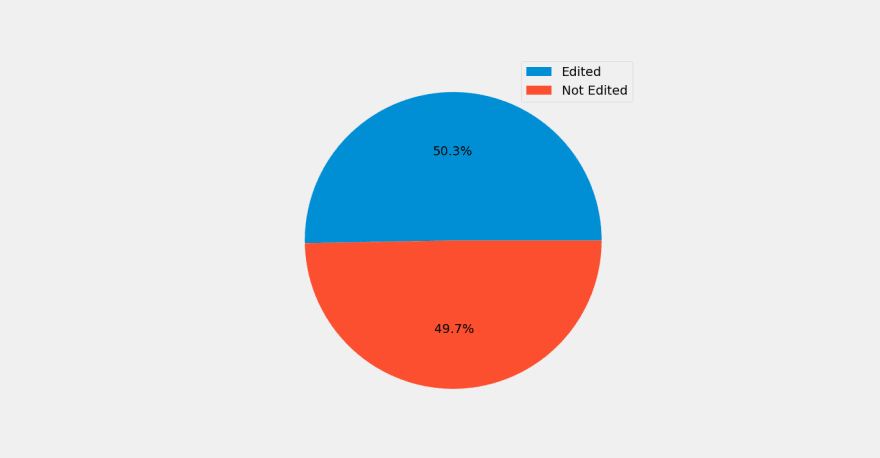 So, about half of the authors make some changes to their post once they are made public to read. That's interesting. Do you know what's more interesting? The pie chart looks like the logo of Pepsi. 🤣 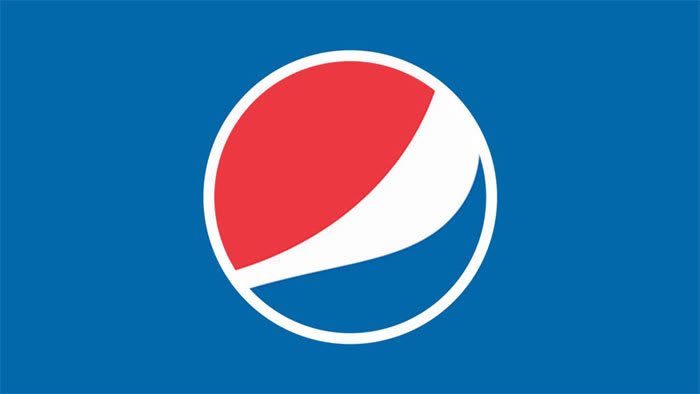 I have noticed that if you are making a series of posts, your first post will get a nice amount of views(reactions) and the number will keep decreasing as the series advances. It's also true for other platforms such as Youtube.

4. Was it posted under an organization?

5. Was it posted the same day it was created?

So, about 79% of the authors publish the post the same day they created it. On the other hand, 21% of them took several days to complete finishing it.

This has to be the most informative chart in this whole post !!! 😂

For this part, I have divided the post into three categories.

To figure out the reading time, I counted the words in the post(actually my script did) then divided it by the average reading speed of an adult person(225 words per minute).

Here is what I have discovered.

Here is a detailed scatter plot of the same pie chart stated above.

Even a few posts crossed the limit of 20 minutes and there is one that will take almost 30 minutes to read. SALUTE!😉

The Dev is a global community. So, activities are going on 24 hours and 7 days each week. So, it doesn't matter which timezone you are, you will still receive fresh and latest posts every hour of the day. However, not all hours are the same. So, here is a chart that indicates the number of posts being published each hour (+ GMT).

And here is another one.

Analysis of the authors

Unfortunately, for this category, there wasn't that much useful data. I still managed to answer the following question(not that useful at all)

Here are the answers.

Now my favorite part of the whole report. The usage of tags. This can be visualized in 5 perspectives.

1. According to the total number of reactions

2. According to total number of comments

You know the reason why discuss is the top tag! 😁

3. According to average number of reactions

We can clearly see the effect of current event, web monetization(I love it!)

4. According to average number of comments

I was expecting discuss to take the lead.

5. According to total number of appearance

So, wanna go viral? Write a post using the javascript tag! 😆
JUST KIDDING! It's not the tags you use but the quality of your content which matters the most.

You can access(contribute if possible) all the raw data from this Github repo.

Some public data collected from the Dev API for simple analysis

We have come to the end. This was all I have to offer to you guys this week. I hope the information was somewhat useful if not helpful to you. Let me know in the comment section what you think about the report and whether you want to see this kind of report each week or not.

Until next time, happy coding. 😀

Muhimen
Nothing more than a programmer nothing less than a programmer. Loves to solve Rubik's cubes in spare time.
How To Write Comments
#webdev #codenewbie #beginners
Semicolons in Python?!
#todayilearned #python
This Post is Written by AI
#python #ai #machinelearning

Once suspended, muhimen123 will not be able to comment or publish posts until their suspension is removed.

Once unsuspended, muhimen123 will be able to comment and publish posts again.

Once unpublished, all posts by muhimen123 will become hidden and only accessible to themselves.

If muhimen123 is not suspended, they can still re-publish their posts from their dashboard.

Once unpublished, this post will become invisible to the public and only accessible to Muhimen.

Thanks for keeping DEV Community 👩‍💻👨‍💻 safe. Here is what you can do to flag muhimen123:

Unflagging muhimen123 will restore default visibility to their posts.