A civil/construction engineer learns to code

A shattered dream and humble beginning

26th October 2019, I received a push notification for an email from the University of Reading. The email said that my application for studying Master’s in Construction Management had been accepted conditionally. I was thrilled. In the next three-four months, I would meet a Study Abroad consultant, figure out my options, apply in twelve different universities and colleges in the U.K and Canada. 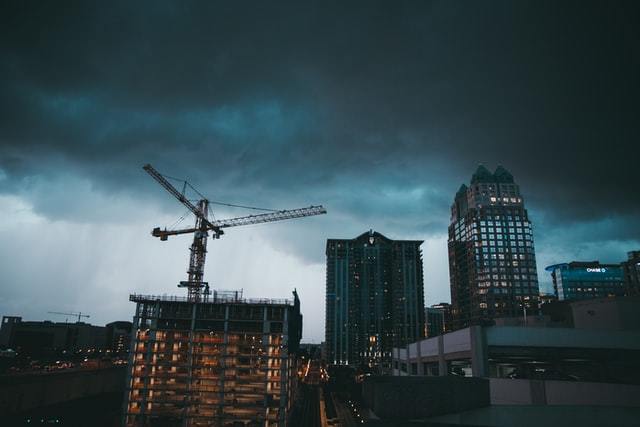 I worked on writing better Statement of Purpose for all those universities, got a Letter of Recommendation from my colleagues at work, appeared in IELTS exam and scored more than required bands. Post this, seven universities sent me unconditional offer letters to study Masters in Construction Management. By mid-March, I was figuring out how to arrange the funds for the study, It was difficult, but I figured eventually something or other will work out & I was excited to fly to the U.K. & start my studies in September-2020.

Fast Forward to 1st July 2020, 10 Million people had been tested positive for Coronavirus till then, out of which almost 300K people were from the U.K. alone and 600K were from my home country, India. Many universities decided their entire session next year would go online while most of them decided for Blended Education. The construction industry in the U.K got affected badly because of the interrupted supply of material, migration of labour & lockdown imposed by the Government. A lot of employees working in the construction industry lost their jobs. In short, my dreams were crushed.

I had put so much effort into this study abroad thing for almost five months & because of it, I got emotionally attached to it. I had put all my hopes in it & I could see the results too but suddenly because of Coronavirus I lost everything.

It was hard for me, seeing my dreams crushed in front of my own eyes & on top of that, the Indian Government had imposed strict lockdown since March-end & the coronavirus cases were continuously rising, which confined me to my home. I couldn't meet my friends, and I couldn’t even travel anywhere to deal with this heartbreak.

Then suddenly I saw one of my good friends, Jai’s number flashing on my mobile screen who also happens to be a very successful programmer. I had been trying to talk to him for some time. I told him everything. He suggested various things & then he mentioned freeCodeCamp.

My first line of code

I wanted to code for a long time, but then I used to tell myself, "You're a Civil Engineer working for almost eight years in the Construction Industry. How can you code, you haven’t studied Computer Science". But I wanted to give it a shot. I opened the website, made an account & started my first lesson for HTML. The website had three sections, the first vertical section would have the information about the topic & a coding challenge, the second vertical section would the section where you type the code & the third one would show you what that code did for you & I wrote my first line of code:

As soon as I wrote it, the preview panel flashed: Hello World, this was such a beautiful feeling when you could see the result of your code in a matter of a few seconds. Just like that, I completed my first coding challenge. The first thing I did was to take the screenshot & send it to Jai. He was happy for me and he agreed to guide me through the process. He asked me to promise him that I would give one hour to coding for 30 days with NOZERODAY. I promised instantly, and my beautiful journey of coding started.

Unlike the first coding challenge, I found the following coding challenges comparatively difficult but thankfully, in freeCodeCamp, there's a help section where you can take help by either getting a hint or Watching a video and if none of this helps you, You can Ask for Help from the Coding Community. So for the next few challenges I had to Watch a Video to understand how I was supposed to do that particular challenge.

But one day, I got stuck at a challenge, I couldn't figure out what was wrong with my code, I got a hint which didn't work, I tried watching a video that didn't help me either. I didn't know what to do next, I immediately texted Jai, I waited for his reply, but I was losing patience. Then it struck me that there was one more option of getting help, Asking for Help.

So I posted my query on freeCodeCamp forum. To my surprise, I started getting replies on my query within 2 minutes. I couldn't believe it. I guess community support is one of the biggest reasons a lot of self-learners are achieving great results.

I also wanted to be a part of this amazing community, so I made an account on discord and joined freeCodeCamp server and started chatting. The first day on discord was amazing; people there were quite welcoming and encouraging. Before starting on discord, I had already begun to post my journey on Twitter and started looking for people going through the same journey, but I couldn't find anyone who had a similar situation like mine.

I am 30YO Civil Engineer learnig to code for the first time.
Day-3 Learned to put checkbox in forms in HTML #100DaysOfCode

Throughout all this Jai was there for my support, as promised, I would update him daily about my committed one hour of coding, he guided me about discord, Twitter, etc. He has been a great support. There were some days when my office work would extend till late in the night, and I was so tired to code but I felt accountable towards my commitment to Jai, and I would push myself and complete my one hour of coding.

After two weeks of coding, Jai suggested that I go for The Coding Career Handbook. This gave me a perspective to look at the implications of my work. By this time, I had completed all the coding challenges of Responsive Web Design and now it was the time for the projects When I saw the project exercises for the first time, I got intimidated. I realised that though I had done almost everything that the user stories said but to complete the projects I'd have to go through the coding challenges all over again.

So then, the craziest period of my coding journey started. There was a lot of office work, after finishing the office work l would go through the coding challenges again to understand how to go about the coding projects & then I'll work for an hour on my coding projects. I'd spend some time on the coding career book, Twitter, and discord, and at last, I would read a couple of more books. I slept very little for almost a week.

Connecting with the community on twitter & discord has been the most difficult thing for me. But I was making some progress, and I am still working on it. At the end of that crazy week, I was on the verge of a burnout, but somehow Jai got to know about it, probably because I was sending him my progress screenshots at 2:00, 3:00 & sometimes at 4:00 AM. He asked me if I was putting too much stress on, I conveniently lied to him, but I learned my lesson from that week onwards I started to sleep earlier than the previous night & so on.

The day I finished my first coding project, my happiness knew no bounds, because the first time I saw the project exercise I told myself that I would not be able to do that, coding challenges were different but project exercises were a different ball game altogether, but I had faith in the faith that Jai had in me & I kept going until I finished my first coding project & later on four more of them.

On the 27th day of my journey, I completed all of my five projects & got my first certificate, Responsive Web Design Developer Certificate from freeCodeCamp. I still don’t know if this is a big deal, but that surely made me extremely happy and proud. 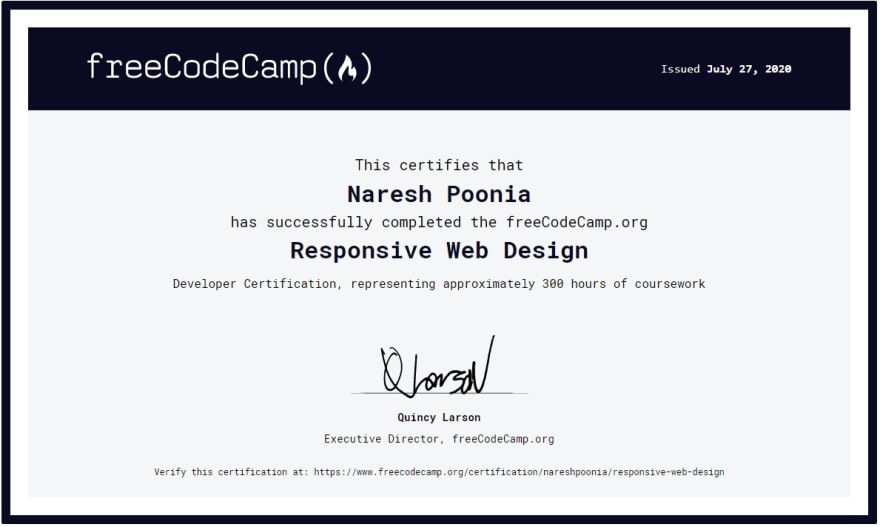 I would love to get some feedback here.

Photo by Christin on Unsplash

Using Local Storage in React with Your Own Custom useLocalStorage Hook