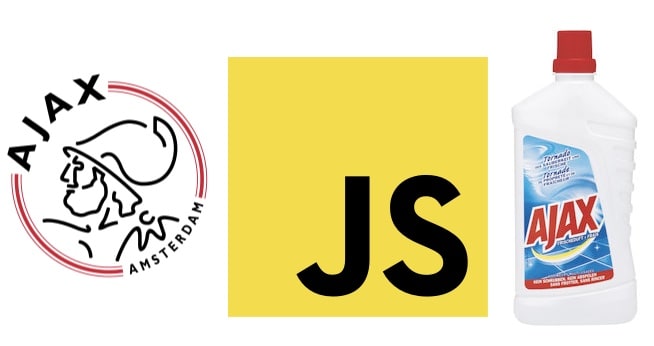 In this, beginner oriented, post I'll show you how to make AJAX calls in pure JavaScript, step by step with few examples.

So, what is AJAX?

OK, but what does it do?

AJAX lets you load some new data to your web page, without the need to reload the whole webpage. This behavior makes your site feel faster and more responsive. Not to mention that nowadays this is the defacto standard. Namely, if you come across a site on which you fill out a form and submit it, and then it has to reload, the site basically screams at you: "OOOOOLD!".

Where can I see it in action?

I'd argue that you can see it in action on any decent webpage nowadays. For example, load the Google website in your browser, and open the dev tools. On Chrome, you can do that with right-clicking a mouse and selecting Inspect, and then clicking in the Network tab.

If you also select the XHR filter and start writing something in the search bar, you'll start seeing the AJAX requests. Very important to note here is that the site didn't reload. 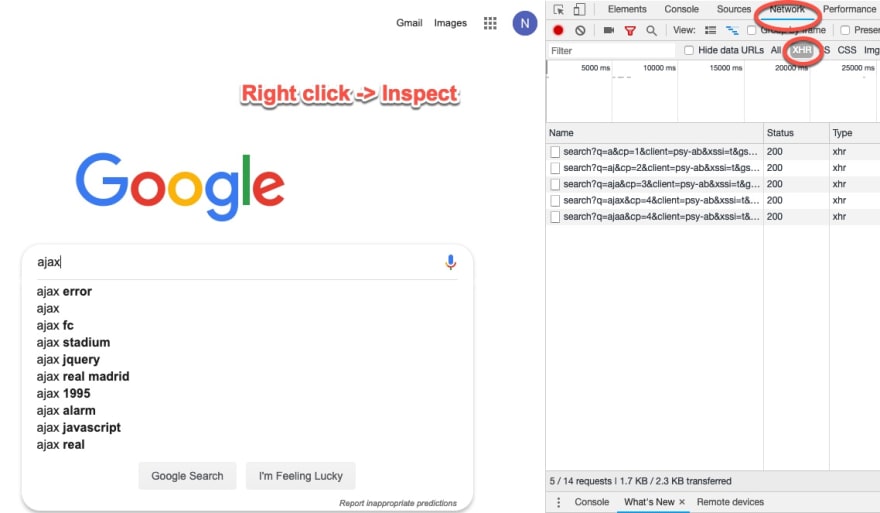 If you click on one of these items in the Name column and then click the Response tab, you'll see the actual response that the server sent back.

⚠️ This is an important concept to remember: web works in a Request/Response kind of a way. A client (your browser) sends Request to some server, and the server returns a Response, which then client processes.

Another example of AJAX in action is when you are presented with a newsletter signup form on some site. You fill out the name and an email address, click send, and the site doesn't refresh. Instead, you get the message right there like "you've been subscribed, check your email".

This is great, but how do I use it?

No one likes the theory, but it actually may help here. To use AJAX in JavaScript, you need to do four things: 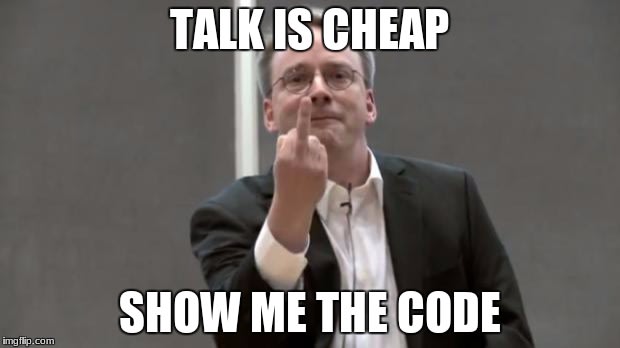 OK, OK, so let's take those steps from above and turn them into code:

If we put it all in one place, we get this:

You'll be a bit disappointed to learn that the code above doesn't do much.

Besides, where could you test this? Well, for one thing, you can't test it on your local machine in a way of creating an index.html and opening it in your browser.

You have to test this on some website that's online. Examples speak more than words, so let's go and open up http://www.google.com in your browser.

Now let's do a few things:

Next, in the Console tab of the dev tools, write this:

The purists will kill me for using var instead of let 😱

To save you a lot of trouble by figuring out why using clear as the function name won't work, check out this post.

Now, copy paste the following code to the Console tab and press Enter to execute it:

Woilà, what do you get? You just loaded Google's main page back in 💪

AJAX can only go so far, most of the time

If you try playing out with the URL in the open command, you'll soon stumble upon CORS. It basically means that, if your domain is google.com, then you can't load the data from:

There are ways to get around this (server proxy on the same domain, JSONP, CORS setting on the domain server, using browser plugins), and I encourage you to dig deeper and learn more about it on your own (or wait until I write about it in some other post).

Great, happy to provide you with them.

Load up my test site. Copy the AJAX function from above and replace https://www.google.com with http://nikola-breznjak.com/_testings/ajax/test1.php and observe what happens.

Try changing the link to http://nikola-breznjak.com/_testings/ajax/test1.php?ime=Nikola and see what happens then. This is called sending the parameter (ime) in the URL. Which brings me to the following difference...

There are two common methods for sending HTTP requests:

XML is short for eXtensible Markup Language, and you can learn more about it here. It used to be for transmitting structured data that's easily parsable by computers. You'll notice it's similar to HTML; for example:

Though, TBH, it's not used on the web, so I won't bore you with it. What is used, extensively, on the web these days is JSON. It looks very much like JavaScript object literal, with one addition - the key also needs to be enclosed with double quotes. For example:

This is an array of objects which consist (currently) of one property called phone.

So, mini project time now. Let's suppose that you work at a job where your boss says that you need to update this page to have the sidebar load the advertisement from the API that can be found here.

He also adds that you need to make it consistent to the current design (Bulma rocks btw!) and make the price be of different colors based on the following rules:

How are you going to do it?

I encourage you to try it out for yourself and only then come back and see my approach below.

You should have this in the end:

You can totally test this now by pasting the code below in the Console on this page.

That's all folks, hope it was useful and see you next time when I'll show you how much easier it is to do all of this with a jQuery. Sure sure, in some later posts we'll come to the fetch API as well. But first, baby steps 💪