This post is part of a series. To see all published posts in the series see the tag "elm calculator book".If you wish to support my work you can purchase the book on gumroad.

A few months ago I finished writing a book on building a calculator in elm. Over the next few months I will be publishing each chapter of the book as a series of blog posts.

Who is this book for?

I wrote this book because I found it difficult to recommend tutorials to those wanting to start using Elm. Beginners might feel intimidated by the new syntax and the non-component way of doing things. If you are coming from React or Vue things will look a bit different. There are no components. Only functions.

After dabbling in Elm for a while I knew I wanted to use it in a larger project but I didn't know where to get started. There seemed like I had to learn so much it was easy to get discouraged. I kept coming back to Elm hoping things would click.

This is the book I wish I had when starting to learn Elm.

Hopefully this will save you time and help you get past the rough patches when starting out with Elm.

Whenever I learn something new, I learn best by actually doing it. If you want to learn a new computer language pick a project and just go for it.

This book is an attempt to guide a beginner through building something non-trivial in Elm. It will be very light on the theory and focus on building stuff.

What will be covered?

I have been working as a software engineer for about 4 years and I like to program mostly for the web. In my day to day work I use Vue.js a lot (still trying to convince my co-workers to try Elm, hence this book).

I have experience writing backends in Node.js, Python, and Java. I also love static site generators like Hugo and 11ty.

I love to learn new things and try new things out. On a whim I decided to try Elm because it looked so different from what I was used to. I tried it and I was pleasantly surprised. If I am going to write something complex in the browser Elm is my first choice.

Provided with each chapter are the following:

What is ellie app?

Ellie app is an online environment to code in Elm online. There is no setup involved. It is similar to CodePen or JSbin.

Try it out at https://ellie-app.com.

Here is what it will look like when it is done. 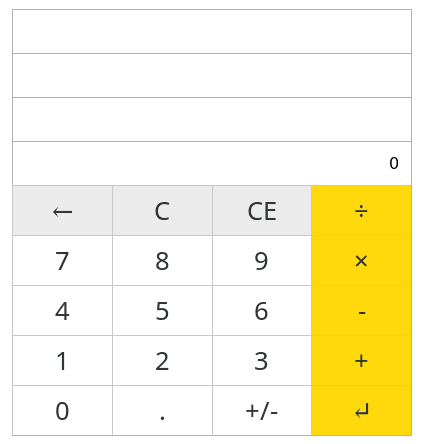 Go to https://elm-calculator.netlify.com for a demo of the finished calculator.

An RPN Calculator is easier to program because all operations work on the stack. Let's briefly explore the stack and how it works with our calculator.

A stack is a data structure that has two operations: push and pop. Similar to a stack of plates, you can push onto the stack by placing things on top. Likewise you take things off the stack by popping off the top. Another name for this is LIFO (last in first out). 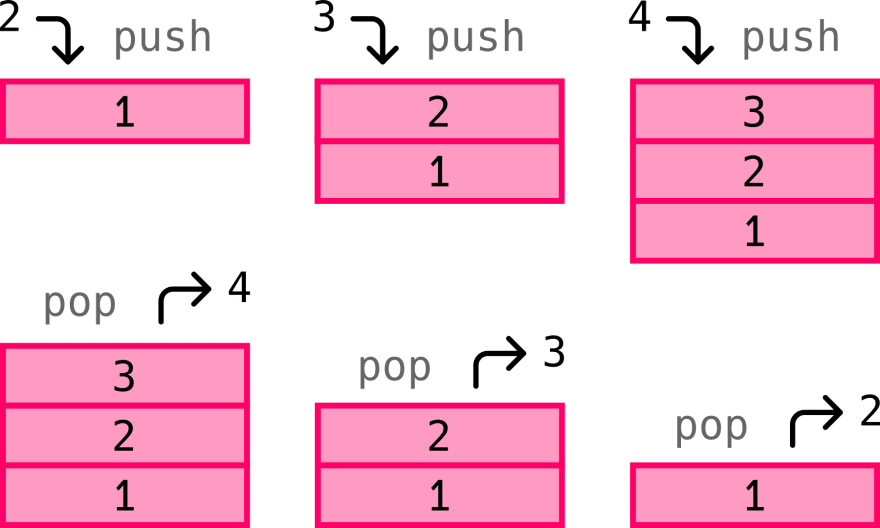 When we do this on an RPN calculator the stack is usually shown up-side-down. The new numbers keep pushing the stack upward.

Why is a traditional calculator harder?

The alternative would be to parse a computation string like 1 + 2. This is what we call "infix" notation, the operator is in between the operands (the numbers). RPN notation is called "postfix" notation, "1 2 +", meaning the operation comes after the operands.

Let's avoid dealing with order of operations and just do postfix notation instead.

Disclaimer: You really can skip this section. I promised light on theory. This section is a bit heavy on theory and not totally necessary to build the project.

Say you really want to program a normal calculator with parenthesis and order of operations. It will be helpful to understand something about tree structures.

If you type "1 + 2" into your calculator. The calculator needs to know it's a valid expression in order to compute it. What if you type in something bogus like "1 + 2 +" and then press enter? 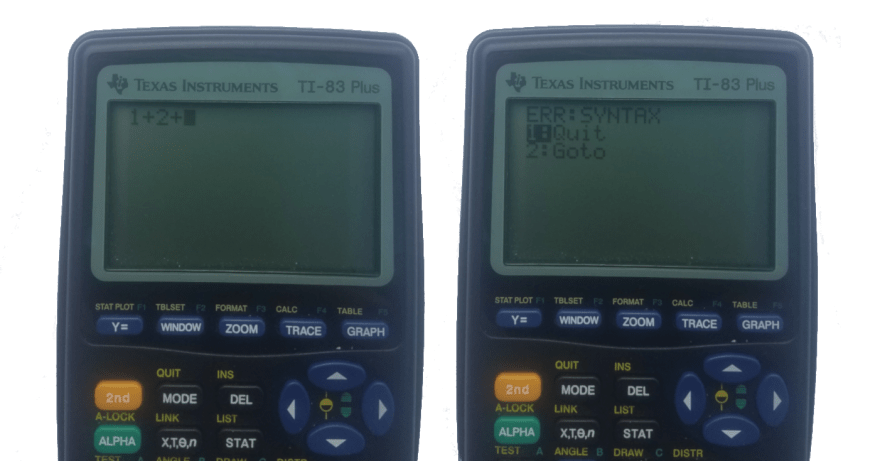 My calculator reported "ERR:SYNTAX". How did it know that? It needed to parse the whole equation and then figure out it was invalid.

After we parse the equation, we can represent the math equation as a tree structure.

This tree structure is called a syntax tree. And in the case of the "+" operator the tree is also a binary tree because each node (the operators) has two leaves or childern (the operands).

Let's take our two examples above and parse them into trees. 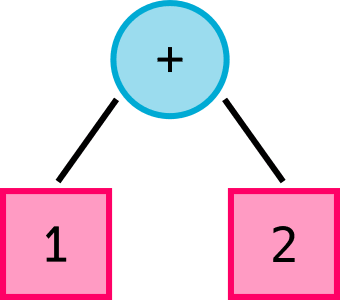 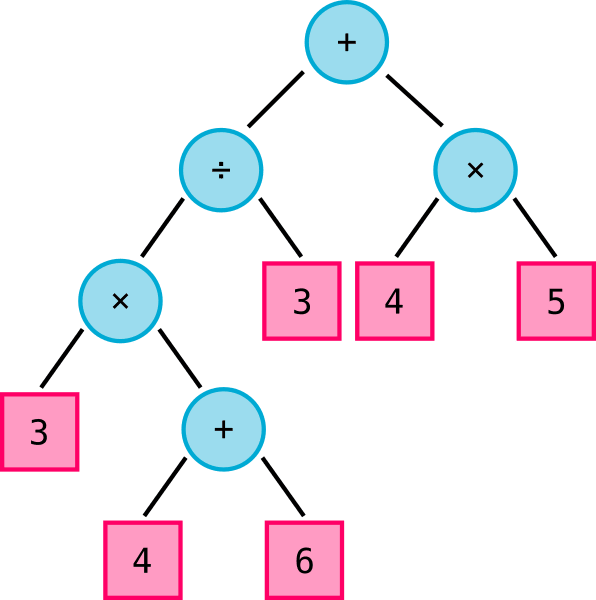 The blue circles are operators and the red squares are the operands. Each operator in these examples, requires two operands, or tree leaves, to be valid.

There are other operators like the square root, √x, or inverse, 1/x, that operate on only one operand. These operators would require one leaf, or child, in the tree. 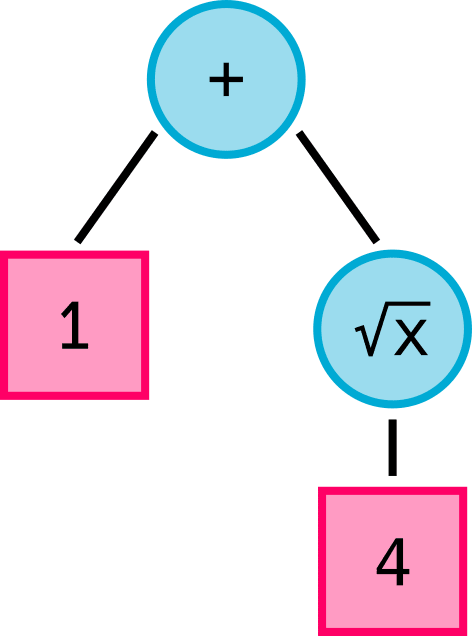 So if we parse the equation into a valid tree, then what? We need to process the tree.

We need to collapse all the operator nodes with two children until our whole tree is processed. If you were to collapse the tree by hand it would look something like .

We need a more systematic way of traversing the tree. There are several ways to go through the tree but we can just use the stack just like before. This is called a post order traversal because we process the children (operands) first and then the operator.

Process tree on the stack

We already process the simple example "1 + 2" on the stack. Let's go through a more complex example to see how this is done. 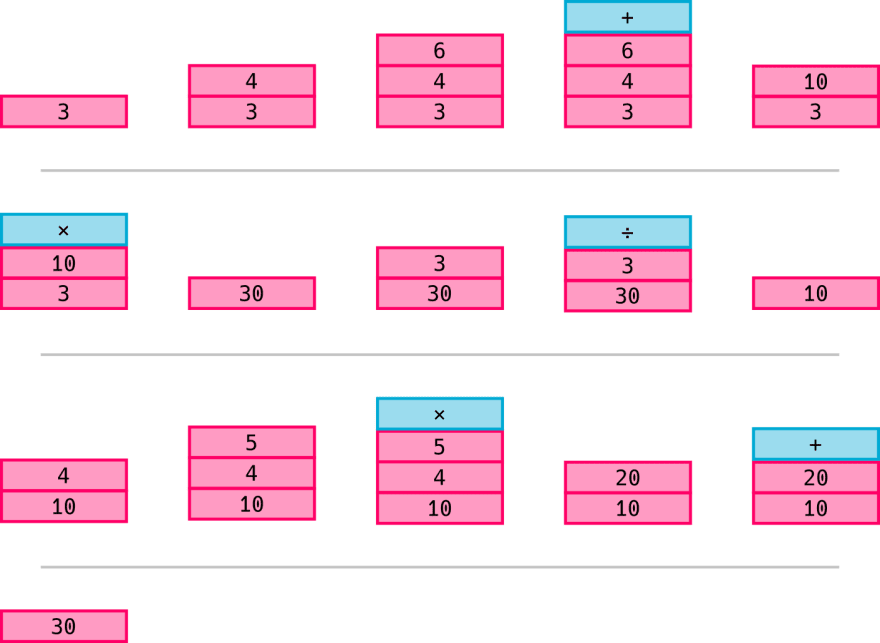 The process on the stack is similar to how we would have collapse the tree by hand. We take the bottom most thing we can compute and stick the numbers on the stack. When we get to an operator we evaluate it and stick it on the stack.

Hopefully you can see now that we can skill the parsing and building of a tree by just using the stack directly with an RPN calculator. The user won't be allowed to enter in an invalid equation.

In the next post we will setup our elm project. See you there.

Once suspended, pianomanfrazier will not be able to comment or publish posts until their suspension is removed.

Once unsuspended, pianomanfrazier will be able to comment and publish posts again.

Once unpublished, all posts by pianomanfrazier will become hidden and only accessible to themselves.

If pianomanfrazier is not suspended, they can still re-publish their posts from their dashboard.

Once unpublished, this post will become invisible to the public and only accessible to Ryan Frazier.

Thanks for keeping DEV Community 👩‍💻👨‍💻 safe. Here is what you can do to flag pianomanfrazier:

Unflagging pianomanfrazier will restore default visibility to their posts.