You can find the source code here

How can we balance Chemical Equations using Constraint Optimization?

Balancing a chemical equation essentially means respecting the conservation of mass and ensuring the same number of atoms of an element are present on the left-hand side (Reactants) and the right-hand side (Products). Basically if you X grams of an element as a reactant, the product will also have X grams of that element in the Products (ideal conditions).

In the above picture, you can notice the following

The above equation was easy to solve and can be done manually. However, things get complicated as the number of elements increases and the number of reactants/products increases. Eg: The below equation although doable manually will require quite a bit of trial and error.

So how can we use Constraint Optimization?

Let’s consider the first equation we had looked at

The coefficient of each reactant/product can be thought of as a variable.

X1, X2, X3, and X4 are the variable coefficients. Each variable must be an integer greater than or equal to 1.

Each element adds a constraint,i.e

The Problem can be considered as a Minimizing Problem since we need to find the smallest coefficients that can balance the equation.

The problem has no objective other than minimizing the coefficients, which means the objective is basically 0 (None).

To summarize this is how our problem is setup

This problem can be set up using PuLP and solver using PuLP’s default solver.

Now, we can move on to generalizing this to support other equations as well.

We will use the chemparse library to parse the reactants and products.

Below are a few examples of what chemparse returns. They are taken from the library’s documentation

Let's create a function to parse the equations. The function will expect an input similar to the one below 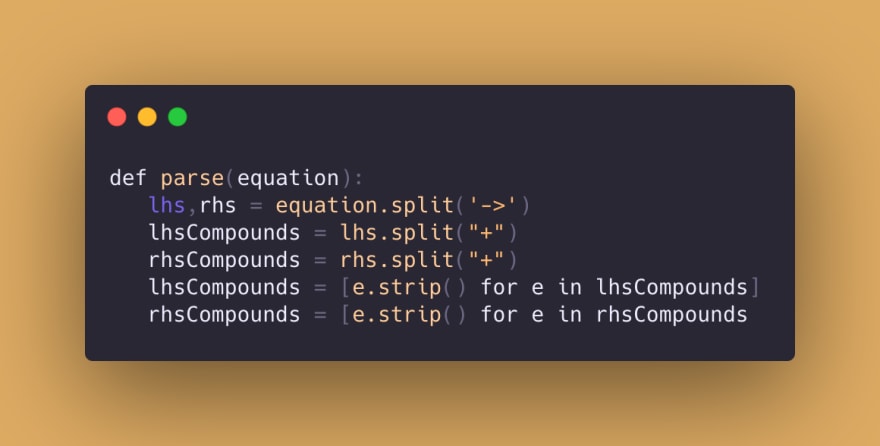 To get the compounds we can split by “+” and remove the trailing spaces.

We need to store the unique elements so we can form constraints for each and convert each reactant and product into a dictionary produced by chemparse. 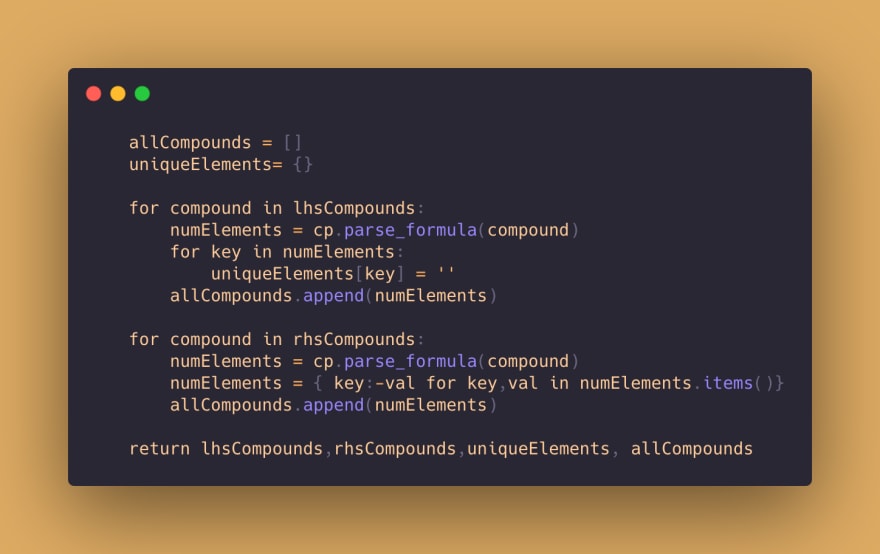 First, we iterate over the lhsCompounds and store the result from chemparse as well as the unique elements.

After that we iterate over rhsCompounds, we do not need to store the unique elements again. However, we store the coefficients as a negative number since this will make it easier when setting up our constraints.

Function to set up and solve Constraint Optimization Problem

Now, we can move on to the problem-solving stuff.

We will call the parse function we had written earlier and store the returned values.

Every reactant/product will have a co-efficient, therefore we can simply loop over the variable allCompounds (this contains the output from chemparse for each reactant/product) and create a variable during each iteration.

As discussed earlier, the problem is a Minimization problem with no Objective.

Now, let’s set up our constraints

As discussed earlier, each element will add a constraint associated with it.

Now, we are ready to solve the problem and create the balanced equation 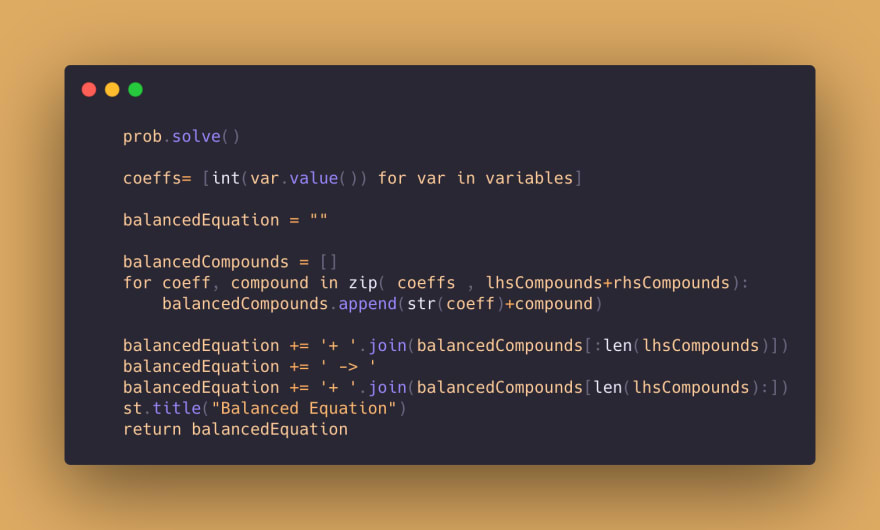 This will be a pretty minimalistic app.

We create a text_input component and set the default value to an unbalanced equation. The balance() function is imported and we pass the text_input’s value as an argument.

Additionally, we can also display the problem before we solve it. This should be inside the balance() function

Once suspended, rahulbanerjee99 will not be able to comment or publish posts until their suspension is removed.

Once unsuspended, rahulbanerjee99 will be able to comment and publish posts again.

Once unpublished, all posts by rahulbanerjee99 will become hidden and only accessible to themselves.

If rahulbanerjee99 is not suspended, they can still re-publish their posts from their dashboard.

Once unpublished, this post will become invisible to the public and only accessible to Rahul Banerjee.

Thanks for keeping DEV Community 👩‍💻👨‍💻 safe. Here is what you can do to flag rahulbanerjee99:

Unflagging rahulbanerjee99 will restore default visibility to their posts.