This is the first part of the Deploy Rails in Amazon ECS post. It's part of a broader series called More than 'hello world' in Docker. The series will get you from hello world in Docker to having your application deployed in AWS.

There is no shortage of tutorials on how to get started on Docker. However, when you start to set it up for production use, there aren’t a lot of tutorials that go in-depth on the things you have to do to get your app from displaying hello world to preparing it to be battered by traffic in production. This series is a deep dive into developing and deploying dockerized applications to AWS.

In the last post, we made a simple Rails 5 application that runs on top of Docker and Docker Compose. We will use that application here. If you decided to skip the last post, here is a copy of the source code to get you started. If you're starting on Docker, I highly suggest starting from the previous post. It contains basic Docker core concepts that are fundamental to understanding the concepts in this series.

For this post, we will learn about the concepts required to get started on ECS.

AWS Elastic Container Service (ECS) is a high-performance container orchestration service that supports Docker. It allows you to run containerized applications on AWS. It is also AWS's homemade competitor to Google's Kubernetes. AWS integrated ECS with a lot of its other services, making it the obvious choice when you are running most of your workloads on AWS.

Why do we need an orchestration service?

Simple containerized applications are easy to handle. If you had one container for your app - that's all you have to manage.

However, production workloads aren't like that. The baseline capacity for a moderately busy workload is often at least 5 containers. You have to make sure 5 containers are running at any one time. Sometimes, these containers aren't in the same instance - but spread across 2-3 instances. In this setup, deployments become a pain. You have to go to multiple instances, run X copies of the new version, test it manually, and then turn off the new ones.

You also have to manage how you're going to have multiple containers in one instance. For traditional deployments, you'd have an application server in an instance, then you'd point that to port 80, then voila, you're done! It's now accessible via HTTP. But what if you have two containers across many instances? You cannot directly point 2 containers in one port 80. So you'd probably use 1 server to load balance the traffic among containers across different instances. Even then, you'd have to manually register and deregister each container to that server. 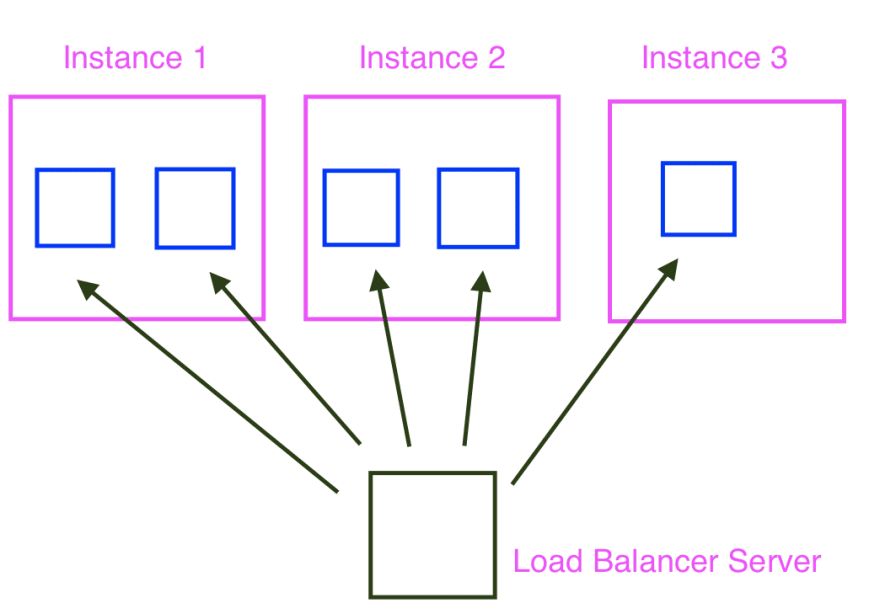 Done this way, the maintenance work required just to make the infrastructure run doesn't justify moving to Docker. I'd seriously rather do a traditional deployment.

Much of that cost, though, is taken away with ECS as an orchestrator service:

The first thing you need to do is push your Docker image to a Docker registry. A Docker registry is very similar to GitHub, but for Docker images. You can pull, push, and tag images. Tags are names we give to different versions of an image. You can push as many versions of your images as you like in an image repository as long as they have different tags (i.e. v0.0.1 and v0.0.2). If they have the same tag (both tagged as v0.0.1), the later version will override the earlier version.

The most prominent registry out there is Docker Hub, containing most of the base images we use for building our images. Docker Hub offers unlimited free public images, but charges for storing private images. AWS has its own private registry: Elastic Container Registry (ECR). It currently charges $0.1/GB/month. It also charges for the traffic going out of ECR and into your instances (i.e when your container pulls an image from ECR). We will be using ECR for this tutorial.

I consider it best practice to have only one container per task - so you can scale the different parts of your application independently.

Since this configuration changes over the lifetime of an application, task definitions can contain multiple versions called a revision.

A Service guarantees you always have X number of tasks running at all times. When a container dies, it will spawn one back up for you. The service is also responsible for deciding which instance, among your fleet of EC2 instances to deploy to.

For example, we made a cluster for our Image Processing app. It has 2 ECS-EC2 services: a web service that renders the website, and an image processing service that resizes an image. The cluster also has 3 c5.large instances, each having a 2vCPU (2,048 CPU Units) and 4GiB of memory. This gives us a total capacity of 6,144 CPU Units and 12GiB of memory. This capacity is shared between all ECS-EC2 services in the cluster. 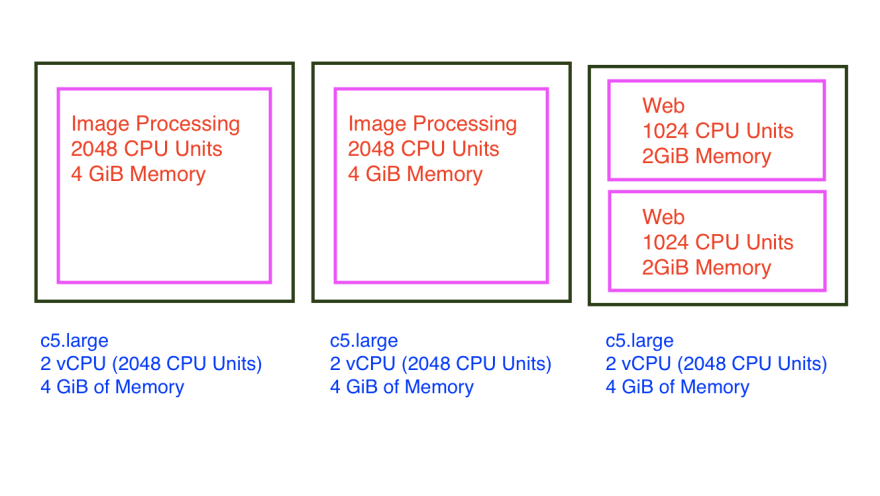 In the next post, we will set up our AWS account and push an image to AWS’s image registry, Elastic Container Registry (ECR).

Moving At DevOps Speed With In Sprint Automation