Develop at the Speed of Thought!

You want your ideas to come to life as you think of them. The instant you write down those ideas, you demand instant gratification from instant functionality. nuxt-stories is a module that you can use to rapidly write stories, game-plans, notes, documentation, whatever for your Nuxt web application. Actually, if you think about it, even your collection of stories can be your app!

For the impatient, you may wish to fast-forward directly to the demos.

Disclaimer: I am the author of nuxt-stories.

Almost a year ago, I introduced the world to nuxt-stories 1.x (Nuxt Storybooking: The Painless Way). My first AH-HA moment for simplifying the [traditionally tedious] storybooking workflow came then, when I realized I could simply use the features offered by the web framework: without completely starting from scratch, I could simply extend my application’s routes to show stories when desired and hide them otherwise. A one-line configuration change to save me from a weekend headache.

Many months later, I had my second AH-HA moment when I realized it was probably the stories I wanted all along to form the application itself, and to not just have them be mere application requirements. I thought stories that could be managed directly on the UI, instead of the filesystem, could allow for a much faster workflow.

It occurred to me that perhaps even though we have all gotten accustomed to using apps, that maybe we never really wanted to use them, but rather functional stories. Stories written on our terms, not anyone else’s. Stories that work with our thought processes and look the way we want. Stories with components organized to our individual liking, instead of apps fragmented on a screen, requiring us to jump in and out of them.

All of human history has been built on stories: ideas we’ve had, lessons we’ve learned, times where we’ve pivoted, and unique calculations we’ve performed. With so much variation encountered by each individual, how can any one app completely satisfy the needs of any one person? And even if apps completely do what we want, why all the updates? The answer is they don’t and never will, precisely because our needs and wants will change as time goes on.

Instead, we need stories that we can write, stories that can then interpret what we write to visualize the knowledge we seek, and then adapt as we do. Having stories that contain not just ideas, but also functional components will potentially be the fastest way to bring thought to life. Moreover, when such stories can be written in a format that loosely looks likes most people’s PostIt® notes (i.e., Markdown), then the story writing and even pseudo-coding can be done by a world of people, not just software developers.

And it would be ideal to see that quickly transform into something like this:

The weather in San Francisco: 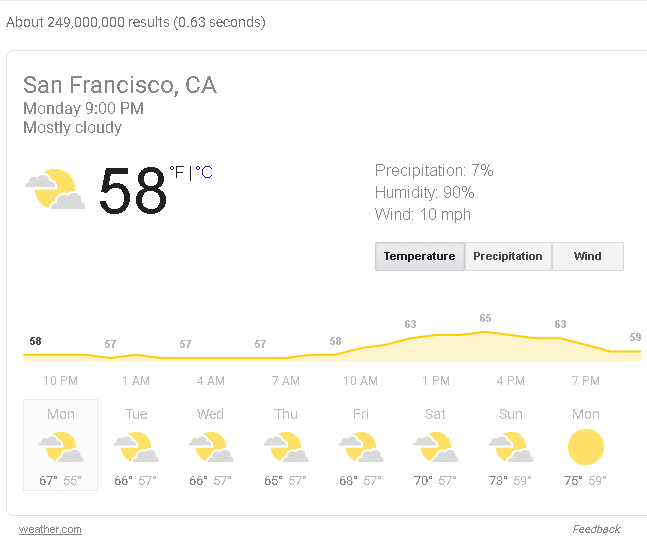 (Screenshot of Google Weather; this example would have “destination” set to “San Francisco” in the stories’ reserved data section)

And then from that point on, this functional widget would always be part of the story. There is complete control of where the widget goes and how it is styled. Ideally, this would all happen as the widget syntax is written down, without the need to go to some app store. The app store would probably be replaced by a component or stories “store”, so that instead of downloading entire apps, just the parts of interest are pulled. Or perhaps even better, widgets could probably have built-in “from” or “variant” attributes that would instantiate a specific widget on-demand:

No store to go to, no waiting for downloads to finish, just retrieve the information of interest the instant the tag is closed with “/>”. No need to hit “Ctrl + Enter” or have some knowledge of keyboard shortcuts. Just type what you want to get what you want.

In nuxt-stories, stories are organized as follows:

For the demos presented in this article below, the following organization is used: 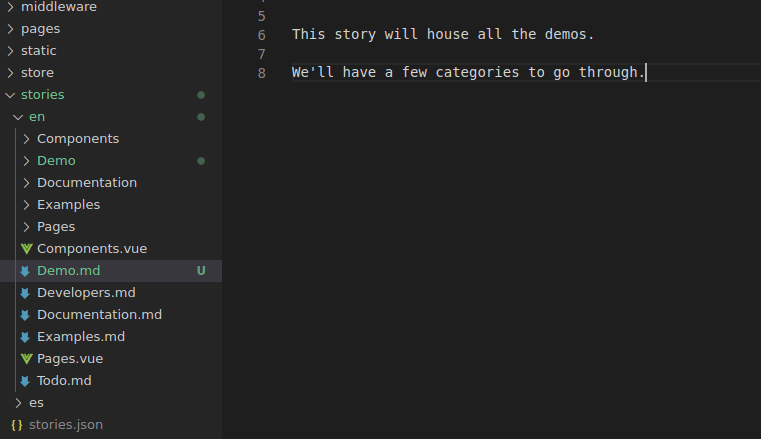 As shown above, it is seen that stories can either be written as “Vue-first” or “Markdown-first”. In my personal opinion, “Markdown-first” is much more intuitive and portable, and so all demos introduced here will use that approach. Also, from this point on, the nuxt-stories module will only support add/edit/delete operations on “Markdown-first” stories. I apologize to any version 1 users that got used to “Vue-first” but, I think you’ll like “Markdown-first” more.

For the rest of this article, I’ll let the videos do the talking. I composed them to help your reading pace keep up with my writing pace. You can pause/play/seek the controls to exactly the tidbits you want. This may be the best way to learn exactly what nuxt-stories is all about and what it plans to be.

While version 1 of nuxt-stories was pretty cool, in hindsight, it didn’t quite do all I wanted for a story-driven development. Version 2 has some major improvements, but there is still a lot of work to be done. The bigger takeaway, however, is providing concrete examples of story-driven development so that the concepts can easily be reused and improved upon. In fact, version 2 came about after not only brainstorming ideas for 5 months, but studying from others, such as ObservableHQ, bootstrap-vue, nuxt-content, h-wiki, and even storybookjs. So much respect goes to them too.

Once suspended, richardeschloss will not be able to comment or publish posts until their suspension is removed.

Once unsuspended, richardeschloss will be able to comment and publish posts again.

Once unpublished, all posts by richardeschloss will become hidden and only accessible to themselves.

If richardeschloss is not suspended, they can still re-publish their posts from their dashboard.

Once unpublished, this post will become invisible to the public and only accessible to Richard Schloss.

Thanks for keeping DEV Community safe. Here is what you can do to flag richardeschloss:

Unflagging richardeschloss will restore default visibility to their posts.