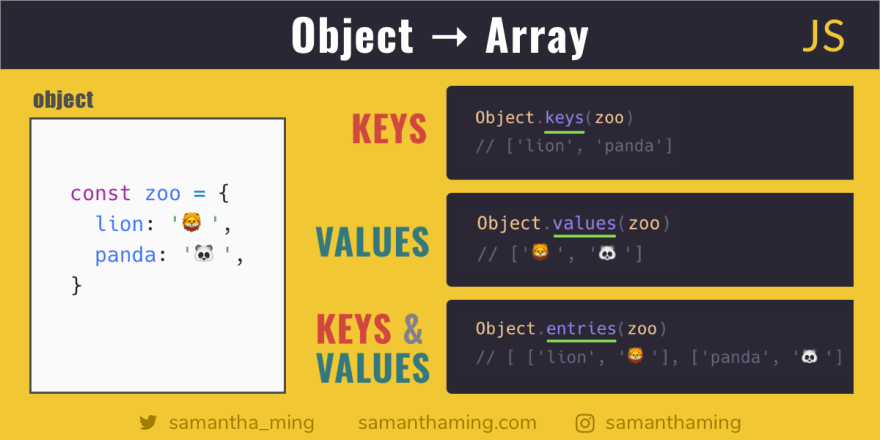 Finally, with ES2017, it's official now! We have 3 variations to convert an Object to an Array 🎊

Array has an array of methods (sorry, bad pun 😝). So by converting the object into an array, you have access to all of that. Woohoo 🥳

Long long ago, in a far far galaxy, looping over Objects was not so easy. Okay, I'm exaggerating a bit 😅. But I remember whenever I needed to convert an object into an array, I had to do something like this.

I always was so annoy and wished there was a better way...

And then ES6 happened! My life changed! We finally have an easier way 🥳

Now, there was a built-in method that quickly turns all the keys in my object into an array:

Life was beautiful! But then I became angry again. Why can I only extract the keys, I want my values too! Humans always want more don't we 😂 And then ES2017 rolled in...

Hi, I'm ES2017 and I grant you all your wish 🧞‍♀️. you can now easily extract the values into an array with one method.

But ES2017 didn't stop there. It gave me more! I grant you BOTH keys and values now, so stop being angry. I was blown away. It turned my frown upside down 😆

But then I'm like...nested array 🤨. C'mon, that's not fun to work with. ES6 swoops in and like, don't worry! That's why I gave you destructuring!

ES6, that's why you are simply the best 💛

Object.keys has the best support. When I say best, it means it supports Internet Explorer 😆. The other, Object.values and Object.entries, unfortunately, don't support Internet Explorer. Luckily, polyfill exists which can improve support.

Your next question might be, now how do I convert the array back to an object. Don't worry, that's covered. There is a new method called Object.fromEntries. It essentially is the opposite of Object.entries.

Note: This is extremely new, so support will be limited. Keep this in your knowledge box, but maybe wait a bit longer before you put it in your actual toolbox 🧰