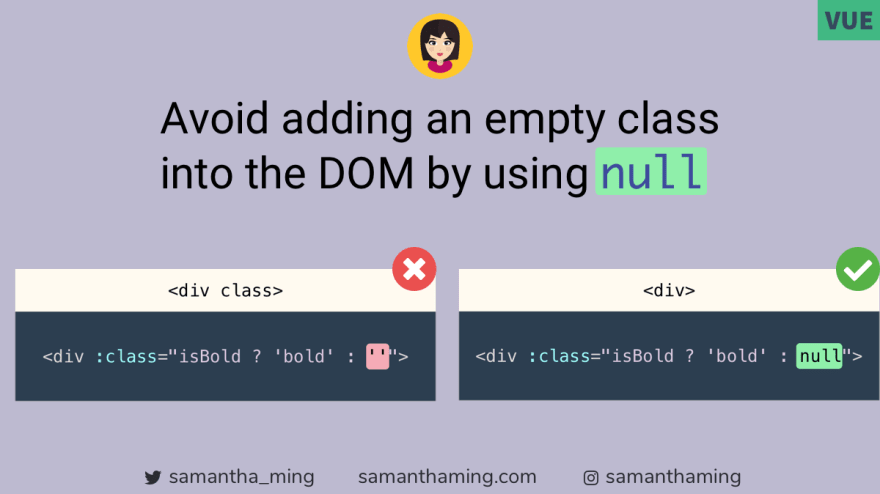 Let's dig into the above example, and see a more complete picture of what's going on.

We are using a ternary operator to conditional set the appropriate class depending on if isBold is truthy or falsy. In this example, we're saying that if isBold is truthy, it will set the class to be bold. If it's falsy, it will return an empty string ''. This syntax :class is short for v-bind:class.

And if isBold is true, it will render:

Alright, let's see what happens if we assign null as the value for our class.

And if isBold is true, it will render:

By the way, undefined would also work 👍

Just a quick reminder that these are the falsy values in JavaScript. So if isBold is any of these values, it will return the falsy condition of the ternary operator.

To read more about this topic, you can check out my previous post, JS Essentials: Falsy Values.

For my simple example, it's probably way better to use the Object Syntax like this:

I guess a better example of using a ternary operator would be for setting multiple classes.

Tangent: When I'm creating tidbits, I always try to keep things as simple as I can. And one way to do it is to reduce as much visual noise as possible. So my examples can sometimes be overly simplified in hope of the reader being able to grasp the concept immediately without doing much processing. A big inspiration that I follow is from this book, Don't Make Me Think. Okay enough tangent, let's get back to the main course! 😆

Let's explore another scenario and see if it works.

&& is not just a logical operator that results in a boolean value. It can actually produce a value. So it's saying if isBold is truthy then return bold. However, if isBold is falsy, then return the value of isBold.

This will still render the empty class 😱

Since isBold is null, the empty class is gone 👍

There's nothing wrong with && -- it is in fact doing its job. It's just that we need a specific return value. In other for us NOT to render an empty class, we have to pass null or undefined. Any other falsy value just won't work. Because this can be so easily missed, I much prefer the more explicit ternary operator OR simply the object syntax 👍

I tried checking this with the W3C Markup Validation Service, and both syntaxes do indeed pass.

And diving into the HTML Standard: Empty attribute syntax, it doesn't seem like it disallows empty attribute.

But the valid-ness does NOT apply to id. Because empty id is considered invalid.

❌ Error: An ID must not be the empty string.

Since the empty class is considered valid and the specs are not against it, this all comes to your stylistic choice. It's your codebase and you can decide how you want to handle it. If you want to keep your HTML output clean, then you can pass null to your Vue ternary operator. If it doesn't matter to you, then forget it. There's no incorrect answer here, it all depends on what you prefer 👍

@kiwi_kaiser: _(What's wrong with Empty classes?__ Noise in the code. Makes it bigger, the user has to download more and search machines have to work harder to get the important information out of the website.

This could lead to misconceptions and that's why I consider that kind of selector a bad practice. Anyway, some developers use this selector to validate whether the element has classes or not, which became especially dangerous when using Vue, so your post subject is also useful to prevent bugs in this situation.