In the beginning Google created Kubernetes. “Let it be open source,” Google said, and the sources opened. And Google saw it was good. All kidding aside, if anyone knows how to run Kubernetes, it’s Google.

In this hands-on post, we’ll learn continuously deliver a demo application to the Google Kubernetes Engine using Semaphore CI/CD. By the end of this read, you’ll have a better understanding of how Kubernetes works, and, even better, a continuous delivery pipeline to play with.

How Do Deployments Work in Kubernetes?

A Kubernetes deployment is like one of those Russian dolls. The application lives inside a Docker container, which is inside a pod, which takes part in the deployment.

A pod is a group of Docker containers running on the same node and sharing resources. Pods are ephemeral—they are meant to be started and stopped as needed. To get a stable public IP address, Kubernetes provides a load balancing service that forwards incoming requests to the pods.

The most straightforward way to define a deployment is to write a manifest like the one I present below.

First, we have the deployment resource, which holds and controls the pods. Deployments have a name and a spec, which defines the final desired state:

The final piece of the manifest is the service. A load balancer service exposes a stable public IP for our users to connect to. We tell Kubernetes that the service will serve the pods labeled as app: semaphore-demo-nodejs-k8s-server.

Before we can use this manifest, we need two things:

We’ll take care of both in the next section. But first, let’s create the necessary services on Google cloud.

We’ll use Semaphore to run our Continuous Integration and Delivery workflow:

Since I wish to focus on the Kubernetes deployment, I’ll skip the Continuous Integration section altogether. If you are curious and would like to examine in detail how it works, you can find about it in the full demo tutorial in Semaphore blog.

You’ll need to sign up few services: Google Cloud Platform will be our cloud provider; also GitHub for the application code and Semaphore for the CI/CD. I recommend installing the semaphore cli for a quick setup.

Go to your Google Cloud Platform and:

I know it’s a lot of work. The good news is that you only have to do it once.

Example application and CI/CD pipeline showing how to run a Node.js project on Semaphore 2.0.

The application is based on Nest.js. The code is written in TypeScript.

The application is deployed to Google Cloud Kubernetes.

Clone it, and add it to Semaphore:

The application implements an API endpoint. It is written in TypeScript with the Nest.js framework.

This pipeline prepares the Docker image, which is then pushed into Google’s Private Container Registry. 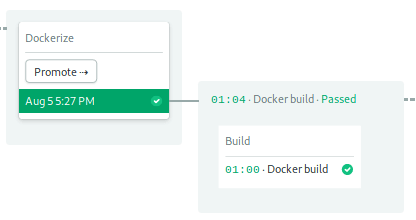 Shall we see how it works? Open .semaphore/docker-build.yml.

At the start of the file, we have a name for the pipeline and the agent. The agent tells Semaphore which of the available machines and OS runs the jobs:

Here is the Docker Build block:

The prologue is executed before each job. Here, it sets up gcloud to work with the project. First, we need to get authorized using gcloud auth. Next, we configure gcloud to work as a docker helper, so we can use the private registry. Finally, we set the active project and zones for the session.

The build job copies some configuration files inside the Docker image and pushes it to the registry.
To tag the image, we use $SEMAPHORE_WORKFLOW_ID, which is guaranteed to be unique for every workflow.

At this point, you may be wondering where those config files and environment variables came from. They were imported with the secrets keyword. Semaphore secrets mechanism allows us to store sensitive data outside the repository securely. We'll create the secrets in a moment.

Once this pipeline is read, we can link it up to the next one with a promotion:

We need to pass the database username and password to the server. We’ll use two files for this, both have more or less the same variables:

Since the files have sensitive information, we shouldn’t check them into GitHub. Instead, we upload them as Secrets to Semaphore. Secrets in Semaphore are automatically encrypted and made available when requested to your jobs.

Copy the provided sample configs outside your repository, for instance to your /tmp directory:

Edit ormconfig.production.json. Replace the host and password values with your database IP address and the password for your demouser. The first part of the file should look like:

Upload both files to Semaphore as a secret called production-env:

We have to create a second secret to store the Google-related information and the service account JSON key:

With a Docker image on hand, we are ready to run it on our Kubernetes cluster.

Take a look at the deployment pipeline at .semaphore/deploy-k8s.yml. It’s made of 2 blocks, each has one job.

Most of the gcloud commands in the prologue we’ve seen, the only new guy here is gcloud container, this one retrieves the Kubernetes config file for the following kubectl commands.

With envsubst we expand in-place the environment variables. The result is a file that should be plain YAML. The last thing remaining is using kubectl apply to send the manifest to our cluster:

At this point, we’re almost done. To mark that this image is the one running on the cluster, we have the last block that tags the image as latest. Here are the relevant commands:

Ready to do a trial run? Push the modifications and watch the pipelines go.

You can check the progress of the jobs from your Semaphore account. Wait a few minutes until all the pipelines are done. Hopefully, everything is green, and we can check the cluster state now.

Here’s the easiest way of connecting to the cluster from your Google Cloud Console, go to:

You’ll get an in-browser terminal that is connected to the project.

Each pod has been assigned a different name; all of them are running a copy of our application.

Next, let’s check the deployment:

The deployment is controlling the 3 pods. We are told the 3 pods are available and up to date.

Ignore the ClusterIP service, that one was before the deployment. We can connect to the application using the EXTERNAL-IP of the LoadBalancer service.

Let’s tests the application with curl:

The API endpoint accepts GET, POST and DELETE requests:

It's been a long ride, but hopefully a smooth one. Now you know how to build a CI/CD pipeline for Google Cloud Kubernetes Engine.

Some ideas play with:

Using AWS instead of Google? Check out this tutorial:

If you wish to learn more about how Semaphore can work Kubernetes and Docker check out these:

Interested in CI/CD and Kubernetes? We’re working on a free ebook, sign up, to receive it as soon as it’s published.

How to use ChatGPT for development work?