It’s an obvious thing that might arise in your mind if you are investing your time in something. That is it worth learning?
If I talk as a programmer, Every program should have a perfect output if the given input is right.

So if you are investing your valuable time and energy in python, You expect a perfect output.

Don’t worry my friend, I have got the answer for your all queries.

All in short….Python is definitely worth learning.

Python is used strongly in thousands of real-world business applications throughout the world, including many large and mission-critical systems.

Let’s explore the prime reasons to learn Python Language In 2020?

The main reason associated with the popularity of Python is, it is fabulous and easy to code. It has a characteristic of quickly writing complicated tasks. Many important applications only support Python language.

The popularity of the Python language in 2020 will be extremely high. As per the study of the TIOBE Index for February 2020, this programming language ranks in the number 3 slot. Its honored with the headline of fast-rising programing language that comes beneath the top 50.

In addition to it, Popularity of Programming Language Index (PYPL) ranked Python as the most famous language based on search engine searches as opposed to different programming languages. The fact, as matched to the current five years, Python has been increased to 17.6%.

Further, the need for Python developers is very high. As per StackOverflow’s Developer Survey, this programming language ranked 2nd in the world as of its adaptable quality.

Moreover, Industry leaders like YouTube, Amazon, Google, Facebook, IBM, NASA, Netflix perform the use of this language. Even more leading companies are utilizing this language that makes the demand for Python developers very high.

If we talk about the salary of python developers in India.

The average salary for a Python Developer is ₹ 4,92,250 per year in India. 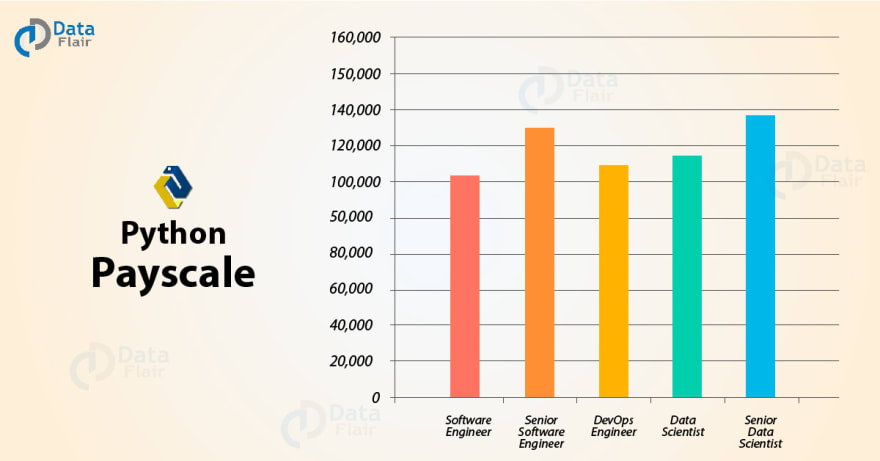 Here’s the list of salaries of python developer for different positions:

3. Python is simple & easy to study

Because of this reason, Python developers manage their coding as more convenient and even fun.

This programming language is also the most portable language. For instance: In a case, the users have a python code for windows, and they want to perform it on a platform like Mac, Unix, or Linus. They can do it without any reformation. Even they can operate this code on any platform flawlessly and uninterruptedly.

Moreover, Python is likewise an extensible programming language. The users can compose python code into C++ or C language. Even, people can compile that code in languages like C++ and C. 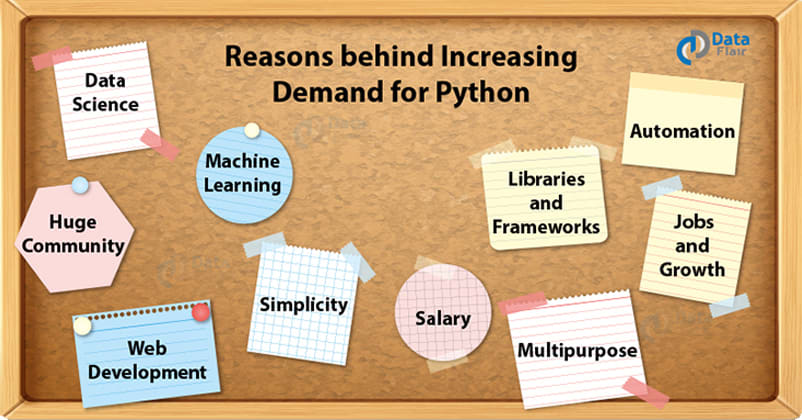 With every inch of time, we can see that Artificial intelligence and Machine Learning are becoming the shine on the eyes of every developer. Which is why, newcomer or expert, all are encouraging the “popularity traffic” towards Python. This is the cause of the increase in Python demand.

Get to know that…..Python’s growth is momentary? or this growth has a remarkable Future!?

6. Python is practiced in Data Science

Python is a high-level programming language that is quick, open, friendly, and easy to learn. It performs flawlessly with others and even runs everywhere seamlessly.

Want to know why does Python language preferable than other data science tools? Here are the top 4 major reasons…..

Explore Why and How to learn python for data science?

Being an open-source scripting language, we can quickly automate anything on Python. A python learner as a novice can immediately learn its basics and gradually able to write its scripts to automate data or stuff available around.

Study Python through the Master Guide – Python Notes for Beginner to Advanced Learners.

To complete the big data job perfectly, Python is thought to be the best data science tool. When there is a need to integrate web application and data analysis with the production database, then big data and Python are the most desirable solution.

A lot of people have queries about, ‘Which programming language is best for AI?’ or “Why Python for AI?”

Despite being a general-purpose language, Python has made its move into the toughest technology that is Artificial Intelligence

I will introduce you to the most efficient and popular AI-based Python Libraries.

These were some prime reasons which prove that python is definitely worth learning!

Make your place reserve in the future, be the smarter student- Learn PYTHON.

It was a pleasure that you took a moment to read my article. I hope this article helps you!

Once suspended, shivashishthak3 will not be able to comment or publish posts until their suspension is removed.

Once unsuspended, shivashishthak3 will be able to comment and publish posts again.

Once unpublished, all posts by shivashishthak3 will become hidden and only accessible to themselves.

If shivashishthak3 is not suspended, they can still re-publish their posts from their dashboard.

Once unpublished, this post will become invisible to the public and only accessible to shivashish thakur.

Thanks for keeping DEV Community 👩‍💻👨‍💻 safe. Here is what you can do to flag shivashishthak3:

Unflagging shivashishthak3 will restore default visibility to their posts.