I created a JavaScript plugin for toggling classes more classily, and I called it Classily.js. The plugin is simple yet powerful, and, if used correctly, it could solve tasks that are not so simple.

Classily.js is a Javascript plugin built to solve a single problem - toggle a CSS class on an HTML element. The current version of Classily.js has more features, including toggling multiple classes and targeting multiple elements.

Before we see the plugin in action, let's see how to install it.

You could install Classily.js by cloning a repository from GitHub:

or by installing using npm:

To initialize Classily.js, add script tag to your HTML document:

and then add the following code:

where selector: ".my-classily-element" is a trigger selector - an element which will trigger class toggle action - usually an anchor or a button. Default selector is .js-classily.

Once you installed and initialized the plugin, you are ready to use the plugin and discover many new ways how the plugin could be helpful.

Which options does Classily.js have?

Two main options could be passed to Classily.js:

data-target option is used for targeting elements. We target elements by providing selectors for querySelectorAll() function.

data-class option is used to pass class names that will be toggled on targeted elements.

We can provide multiple targets and classes by separating them with comma character. Using these two options, and depending on how the options are passed, we could achieve four different scenarios: 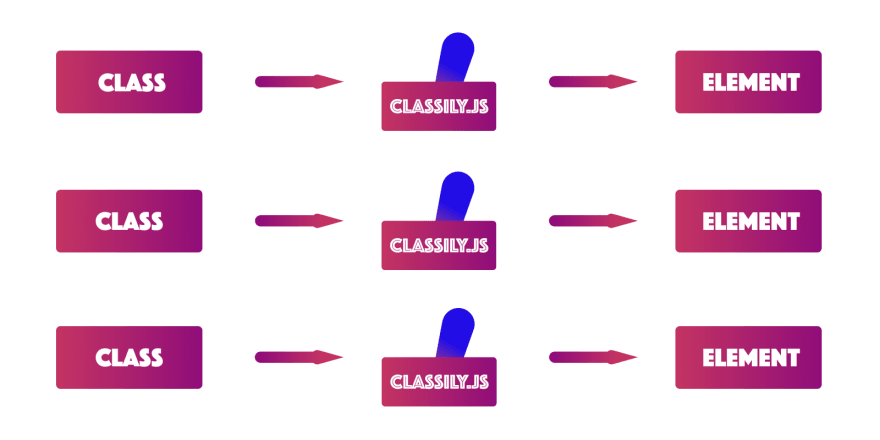 To trigger class toggle action, you should add the following code:

As you see, Classily.js is not complicated to use. In fact, it looks like it cannot do much, but I want to reassure you that is not the case. Stay with me; I will guide you through examples.

How to toggle the same class on multiple elements?

If you click on the "Toggle button" in the example below, you should see that both headings will change color.

By adding the same class .my-class on target elements we are targeting both headings at the same time. That is because Classily.js uses querySelectorAll() function.

There is another way how we could achieve the same effect - we could provide a comma-separated list of selectors.

How to toggle multiple classes on multiple elements?

In the example below, we are toggling two different classes on two separate elements.

Pretty awesome, right. Are you ready for more advanced examples?

How to use Classily.js for toggling states?

In the following example, the heading could be in three states:

Once we activate "blue", "red" or "gold" state, the heading could never go back to default state.

To create the same effect, think how many lines of JavaScript code you should write. And now let's look how we could achieve this effect using Classily.js:

First, we are targeting .my-class element with .red class. If there is no such element, Classily.js will skip this step. If the element exists, then we remove .red class. Repeat the same for the .gold class. Then, we are targeting .my-class element that doesn't contain .blue class. If the element exists, then add .blue class. The heading is now in "blue" state. The same is for "red" and "gold" states.

The method above could be applied to create tab section, feature seen on many websites, for example. When the user clicks on a tab, different content appears.

Does Classily.js have special features?

Often there is a need to switch the state of the element itself, like the button in this example.

To avoid usage of complicated selectors, we could use the keyword this.

In this example, we used anchor tag as a button. There is another feature that is useful - we could prevent default behavior, like opening a link. To do that, we should use data-prevent="default" option.

Classily.js is helping me with my everyday job. I no longer have to jump from template file to script file to execute simple tasks like class toggling. And I'm able to achieve some pretty nifty tricks with it.

Also, don't hesitate to report an issue, if you find any. And if you know how to make tests for this plugin, let me know how.

Configure the CRA public URL post-build with Node.js and express