Would you be interested in knowing which politician has made the most headlines? Do you want to see which celebrity has best held the attention of journalists over the years? Are you intrigued about the difference in crime news grouped by states?

If your answer is yes to any of those questions, then we share the same curiosity.

Looking at archives maintained by Newspapers, I wondered who would go through over twenty-five thousand pages of news headlines sorted by date and make any heads or tails of the big picture around it. How could someone analyse trends or gains insights from an almost endless list of headlines dating decades ago by just reading them on a website.

But I could not stop myself from doing something about this problem I had at hand. I needed to devise a way to reliably, efficiently and easily comb through the data these archives made available. To accomplish this goal, I set out with this project.

In this writeup I will go over how I created a fundamental tool or method for anyone to easily analyse, understand and research the Indian Headlines data of the past 25 years.

To start with my project, I thought I could easily find a dataset which contained all the data I needed, properly formatted in a csv file and would only leave me to write scripts to analyse that data. If only life was that easy.

Unfortunately, I could not find any dataset suitable to my needs and thus had to dedicate a significant portion of work-time of this project on procuring and cleaning the data myself.

Ideally, we would need a data file with an exhaustive, credible and unbiased collection of headlines from a large enough timeline.

In the absence of pre-prepared datasets, I had to find a credible source to collect headlines data stretching for a significant duration of time. So what better place than the websites of major journalistic organisations like The Times, The Hindu, Deccan Herald or the Indian Express.

But these organisations do not publicly provide an easy way to procure the data we need. So the most obvious way was to read the data off their own websites. Fortunately almost all of these organisations provide a public archive of their journalism which is better option than sitting and recording all the headlines myself for the next decade.

But the archives that these organisations provide do not allow you to easily export the data they make available themselves in a format which can be utilized by us. So the best way to obtain the data we need is to utilize Web Scraping.

Web Scraping is essentially the process of automatically extract the data we need from websites by utilizing tools which can parse and read data from the source code of these websites (Mostly HTML).

For this project, I use the following python modules/packages which are extremely suited for the task:

❗ I have not covered the Ethics of using Web Scraping Techniques in the scope of this project. Please do your research before putting into practice any code/instructions present here. ❗

I decided to use the Indian Express News Archives because it generates its content statically and the URL to change pages is easily iterable through code. Certain other public archives generate their web pages dynamically through JavaScript, while some others make it very difficult to traverse the content for the scraping script.

Now lets look at the code for the scraping script I wrote:

This is the basic code needed to obtain the source HTML code from the Indian Express pages. The pageNumber is the variable iterated through a for loop in the range of the pages we need to scrape.

The final obtained source code is stored in the soup variable.

Now, the actual headlines in the code are actually stored inside <h2> tags with the class name as title. So all we need to do is use the BeautifulSoup library and filter the obtained code to read off the <a> tags from the filtered title headline tags. Then we further use get_text function to get the headline string.

It is much more convenient for us to store the scraped data in a text file, rather than print it on the terminal. A solution to write all of this data is easily implemented with the following code.

When this code is properly looped, it can be used to scrape and obtain the headline data from the complete archive rather than just one page. In this case the pages extend to Page 25073 and thus a the above code can simply be put into a loop iterating over all the pages.

When I ran the final script for the first time, I realised that scraping over 25 thousand pages with this script would take me over multiple days running my the script 24x7, while any interruption to the process could erase all the progress.

Thus for the sake of accessibility, ease-of-use and practicality of the process I implemented the code in a fashion where it could be paused at any moment and would save and remember its progress. While this addressed the problem of interruptions and being able to pause the script execution, it was still projected to take me a very long time to just be able to scrape this data. To decrease the time it would take for the complete scraping of the archive, I divided the 25 thousand pages into 20 equal groups. This allowed my workstation to simultaneously run twenty instances of the same script running parallel workloads and reducing the time needed over twentyfold.

All of the above described process finally netted me a list of over 6.5 lac headlines in a text file in the following format:

It is obviously in a much more accessible format now, but how do we run any kind of analysis on this data file?
The simple answer is Keyword Analysis. In the context of this project, it is the method of classifying, categorizing, labelling, and analysing these headlines by the presence (or lack of) certain words in them.

For example, if a certain headline has the word "Mahatma Gandhi", "Bapu", or "Gandhi Ji", it is very likely to be a headline reporting something about Gandhi. We will be using this form of deduction in the scope of this project to analyse the dataset that we have formed.

Therefore to exercise this idea, we need to implement certain tools to be on our disposal. In the scope of this project, these tools are basically methods/functions which find(/aggregate) the headlines depending on the presence of keywords. Multiple different need based cases can be imagined, but overall they can all be divided into the following fundamental implementations:

The above mentioned three fundamental functions are implemented as follows:

Well, now that we have looked at the tools and platforms I developed for this project, lets look at how these can be used to analyse and interpret data.

An analysis was not so much the focus of this project than actually developing a framework allowing for easy analysis of this dataset. But I have still done some analysis and visualizations to demonstrate the usability of the above described code.

I will be using the word "Popular" to denote how much the entity has been in news. It has unreliable correlation with actual popularity.

First, we create lists with the keywords that will be used to identify appropriate headlines. These lists contain keywords that I think are enough to identify if a headline is aimed at these parties.Then the data is obtained and arranged as a pandas dataframe and then printed sorted by headlines count.

The result is visualised in the following graph: 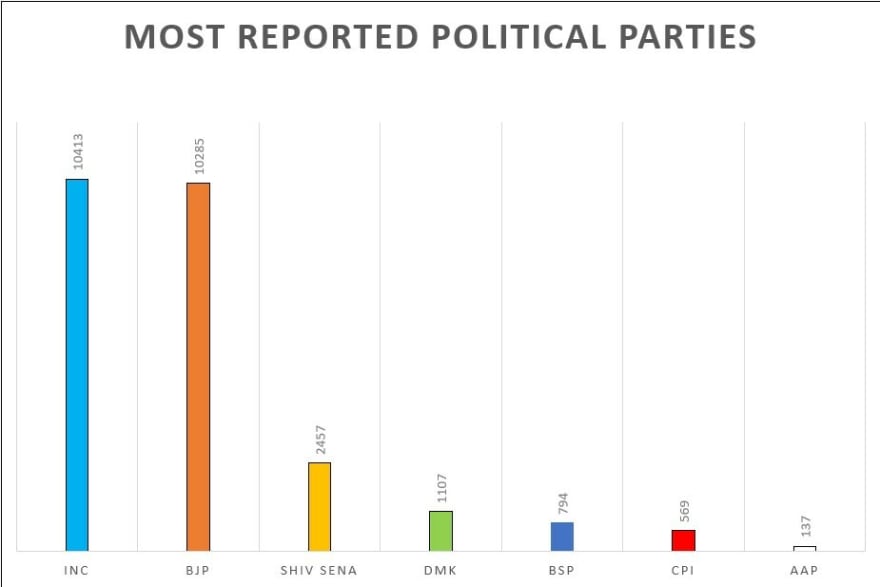 As is clearly discernible, INC is the most reported on by part followed very closely by BJP.

The code to crunch the numbers is very similar to the one we saw above:

For the visualization aspect of this I thought of using a Circle Packing Graph. I explored my options with external visualization options but none of them offered what I was looking for.
After a lot of research I stumbled on a way to generate what I wanted through python code and the Circlify module.

So, I wrote the code to generate the graph I was looking for. But it turned out to not be as polished or presentable as I wanted it to be. But I am still including the code snippet I wrote:

Instead of the Circle Packing Graph, I decided to create the following visualization which presents the data generated by my above code. 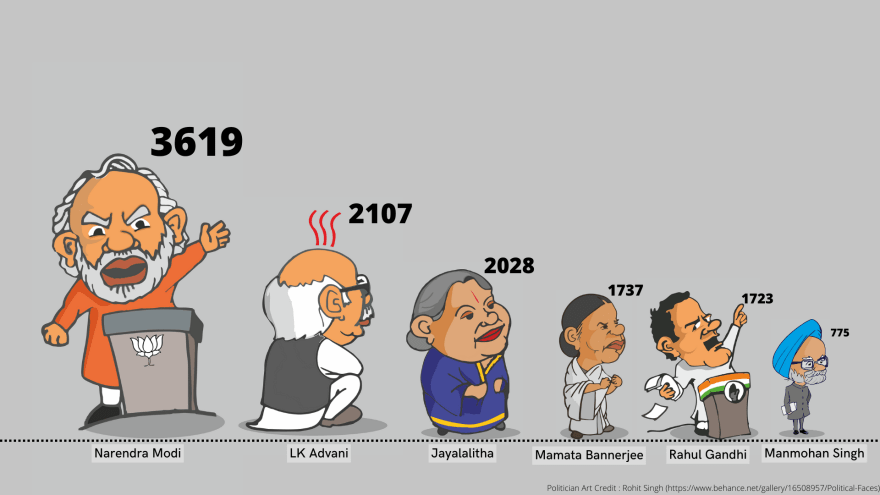 Now we will proceed to combine the above code to produce statistics for state wise crime reports grouped by type of crime.

I used the following code to derive values for the analysis we are performing, replacing crimeMerged with the combination of crimes I am analysing.

The visualization in forms of a heat map for the 3 heavies (in terms of the range of dataset) is as follows:

This is a similar heatmap which encompasses a general image of crime intensity over the Indian states:

The crime news statistics actually correspond to the real crime stats of the states as per government data. The only exception are the southern states. The southern states show much lower numbers in journalistic data compared to actual govt data. This raises an interesting question on what the reason can be? Is it journalistic bias? Unfortunately I am not qualified to answer that question but I do encourage you to find the answer to this question.

The Three Khans of Bollywood

I still remember when a famous saying used to be "Bollywood is ruled by the Three Khans". Well to take a lighter (away from crime and politics) look at the data, lets see which khan ends up the most popular amongst the three. 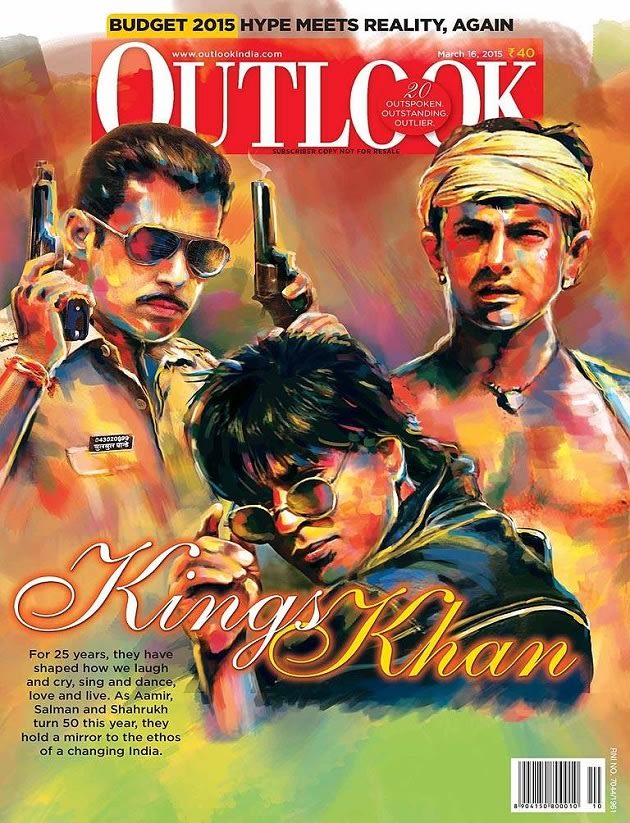 Here is the code which was run to find the most popular amongst the three.

As it turns out its the "Bhai" of the industry. To be very honest it makes sense with how crazy his fans are.

The aim of this endeavour was to make available a tool to be able to perform analysis like the ones shown above. And in that I have succeeded.

The scripts for the Web Scraper and the Headline Analysis Functions is available on the project repository.

It was extremely fun and informative working on this project. I learned and gained experience with the following:

Thankyou very much for reading through the whole write-up. I really hope you found it interesting. Please leave a comment sharing any feedback.

Once suspended, subh_2111 will not be able to comment or publish posts until their suspension is removed.

Once unsuspended, subh_2111 will be able to comment and publish posts again.

Once unpublished, all posts by subh_2111 will become hidden and only accessible to themselves.

If subh_2111 is not suspended, they can still re-publish their posts from their dashboard.

Once unpublished, this post will become invisible to the public and only accessible to Subh Chaturvedi.