My girlfriend is currently working on a degree in Computer Science. I do my best to butt out, but sometimes when I see concepts and topics covered VERY poorly, I have to intervene. Last quarter, her classes covered topics such as parallel computing, task scheduling, and other OS-level concepts. These concepts are notoriously confusing for novice programmers, and her teachers weren't helping that situation to say the least. I spent some time creating a digestible narrative and figured it's worth sharing

Hell's Kitchen (I promise this is going somewhere)

Hell's Kitchen (a terrible reality show about cooking) is a guilty pleasure at my house. For those of you who aren't familiar with the show, each season starts with two teams of chefs, a red team and blue team. Each night, they cook in separate kitchens, and whichever team does worse, loses a member permanently (calm down, they don't kill them). Below I've crudely drawn a picture of what this looks like. 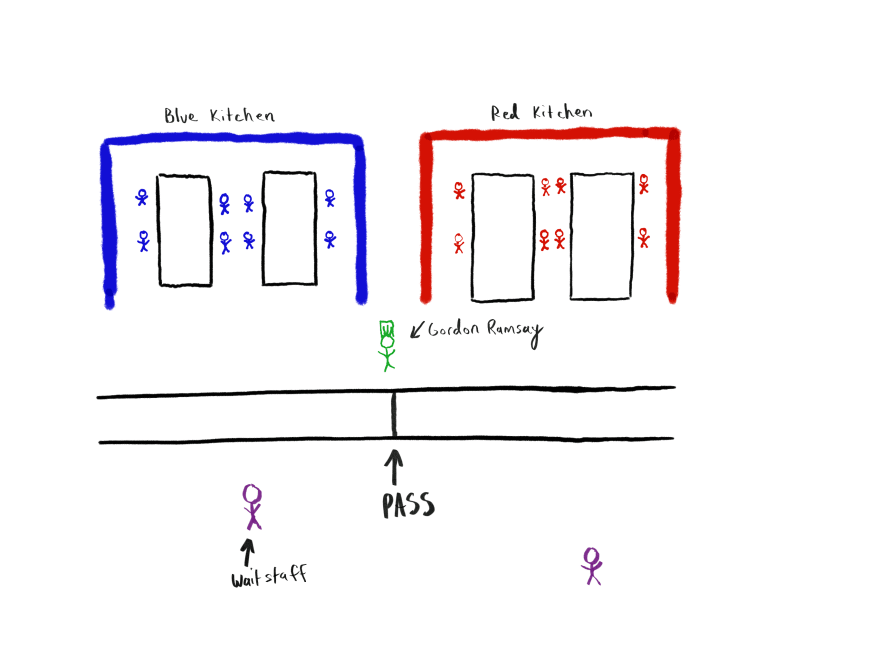 There are a few things you should know when you're cooking in Hell's kitchen.

Parallel - Multiple things happening in the same moment of time

Concurrent - Multiple tasks being submitted without waiting for the previous task to complete (not a single file line).

The easiest is parallel. Many things are happening in parallel in Hell's Kitchen. The chefs in the blue team are all cooking their dishes at the same time, this is parallelism. The two kitchens are both cooking orders at the same time too, that's parallelism. The waiters are taking orders while the chefs are cooking, the waiters are therefore working in parallel with the chefs. Ask the following question to determine if something is parallel:

Would I need a clone of myself to complete the task?

If the answer is yes, it's most likely parallel

Concurrent and parallel are the easiest for people to conflate. Concurrency means that in some period of time, multiple things are being done. The human ability to multi-task is concurrent and not parallel because you're not able to literally do "two things at once".

He can either be on the left side of the kitchen... 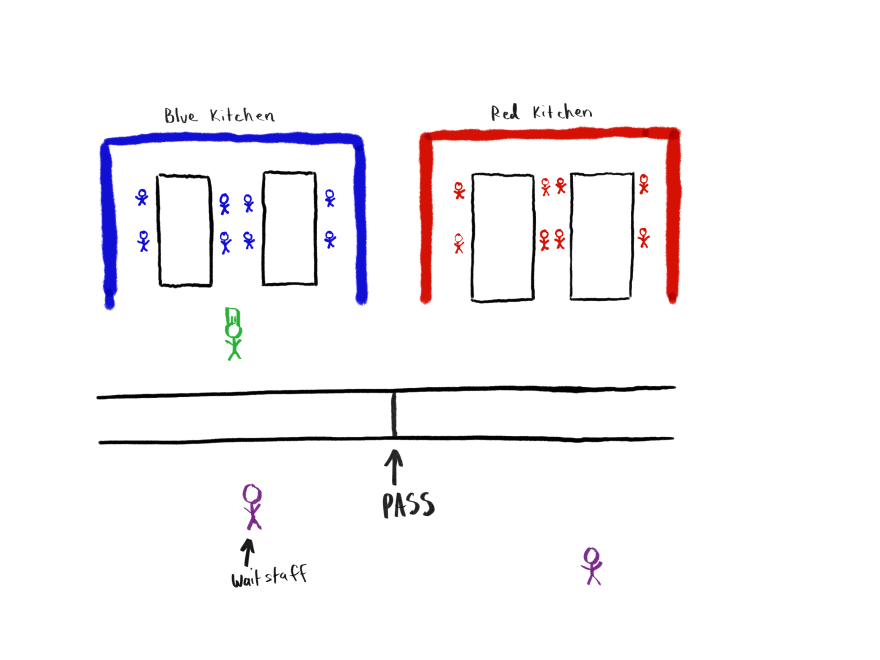 Or the right side... 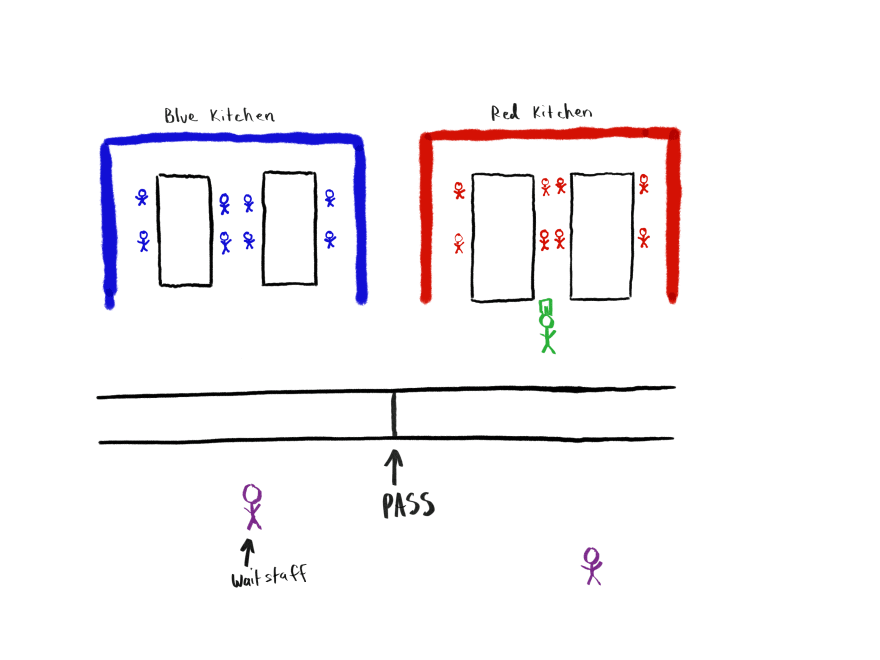 But never both sides! When concurrency is implemented in this manner, it is know as "interleaved concurrency".

Parallelism and concurrency are closely related because parallelism is one method of achieving concurrency. If Gordon Ramsay decided to hire a new head chef that managed the blue kitchen, while he managed the red kitchen, that would be both concurrent and parallel.

Asynchronous tasks are a bit tricky for people. Asynchronous simply means that you do not wait for something to complete after you start it.

In Hell's Kitchen, waiters brings tickets to the pass so meals can be cooked. They do not stand and wait for those meals to be done before going back into the dining room. Instead, they rely on a bell to know when the order is ready.

People are often confused by the relationship between parallelism/concurrency and asynchronous tasks.

Consider this, Gordon Ramsay could decide that instead of the teams cooking and waiters taking orders, he will do it all himself. He also decides to continue managing the pass and collecting tickets (he is Gordon Ramsay after all). As Gordon Ramsay is only one person, this change immediately removes all parallelism from the restaurant. But as long as Gordon Ramsay doesn't bring an order to the pass and stand and wait for it to be done (he's the only person working so that would be silly), it's asynchronous.

As a note, if Gordon were to stand and wait for himself to cook a meal, it would be synchronous

To summarize, asynchronous tasks require at least concurrency but not parallelism, although that works too.

Parallel - Do you need a clone?

Concurrent - Can you submit multiple tasks without waiting for the previous one to complete?

Asynchronous - Not sitting and waiting for something to complete

If this article was helpful, I have quite a few other concepts that I've integrated into the analogy and wouldn't mind creating another post.

14 VS Code Shortcuts to Supercharge Your Productivity

Building a blockchain runtime module in Rust as Jr Dev