One of the first glances I took to electronics in a serious way was at university. Against most of my classmates, in the third year I chose to study electronics specialization alongside systems. Most of the subjects gave us a lot of freedom to choose projects, and by that time I was very into consoles's hardware (I was doubtful between fully work in cybersecurity or pursue a console designing career in Japan) and got the chance to do a presentation about both the PSP (Playstation Portable) and the Spectrum ZX Sinclair electronics. I managed to obtain a Spectrum years later, but by that time I only managed to collect a couple of broken, old PSP consoles from a friend, I repaired one and kept the other to "play forensics" on it for my presentation. When I was a kid I used to have a digivice, for those who are not very into Japanese cartoons, is a device that used to appear in the show Digimon, and kept working until a couple of months, I repaired it just a month ago and this consoles's hardware thing came back to me. Today I wanted to bring you some of the things that I found beautiful about consoles's electronics designs and why are those consoles wonderful, apart form the fact they let you play awesome games. Let's learn what happened between the Spectrum (which I know was a computer, and not just a console, but the energy is similar) and the Nintendo Switch!

Videogames right now are quite common, I cannot think of anyone I know who haven't played at least one. My mom for example used to be the master of PACMAN (she passed it, I didn't know it has an end until she passed it) and The Prince of Persia. But at first gaming was a more complicated hobby to perform. As many other things in tech, the first steps into it began in the academy lobby, where a bunch of investigators created a text adventure for fun. But today I want to focus on hardware designed mostly for the purpose of playing.

So let's jump to the 70's and 80's when arcades were born. Konami, Atari and Sega are great examples of how Japanese tech culture got right into the attention of the youth through arcade and later personal consoles. They were so popular that were even portrayed in some futuristic movies such as Blade Runner. 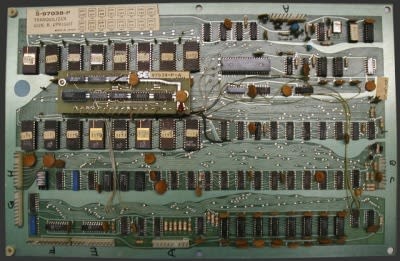 This entire system worked over an 8-bit microprocessor (Zilog Z80), imagine! Each detail of the code counted in order to fit it. In the picture we can see the main registers noted down in the board:

In 1982 the ZX Spectrum appeared, again 8-bit processor based, actually based in Zilog Z80 as well, just like the arcade. Even though ZX Spectrum (as well as other 80's computers such as Commodore or Spanish Dragon 32) could be used for many programming related tasks, it was very popular among gaming lovers. Actually, the guy who sold me my ZX Spectrum was an old games programmer. Some of you might know how it looks or even this machine works, but... have you seen the inside? 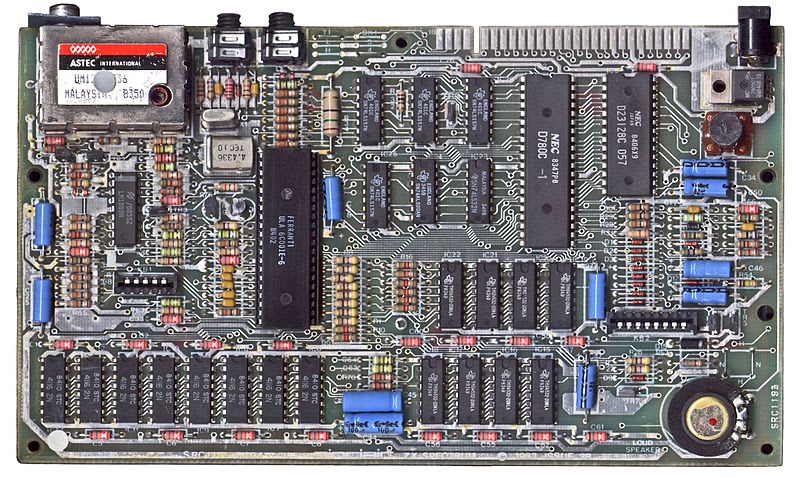 As a funny fact, the Commodore Amiga components had some interesting names, girl names (maybe family of the engineers?) and actually one of those have my name, Paula, the audio chipset.I felt very happy about that.

We can appreciate several similarities with the arcade's. In any case we can see that the design is mostly around fitting stuff in the board, but mostly in a pretty fair design, rectangular. And that's how I want to introduce you to the next part...

The late 80's was the time of experimenting over design. Nintendo was a toy company, started launching a Japanese card game called "Hanafuda Koi Koi". Through the 70's, it began to work on electronics, as the other Japanese companies previously mentioned, but by the time consoles were getting more and more attention, they launched the Game Boy. And the more attractive fact about it was its size and purpose, to create a portable device for playing. They probably studied this idea through the 80's when they launched Game and Watch (ゲーム&ウオッチ), a collection of portable simple consoles. And by simple I mean the games, because the work itself was complicated enough: fitting a game in a 4-bit processor and a tiny ram. It was an absolute win, they sold millions and millions all over the world and with that precedent, the success of the Game Boy was almost assured. In this amazing repo we can check and study tons of facts about the Game Boy, including hardware schematics. Also note this document about the console. 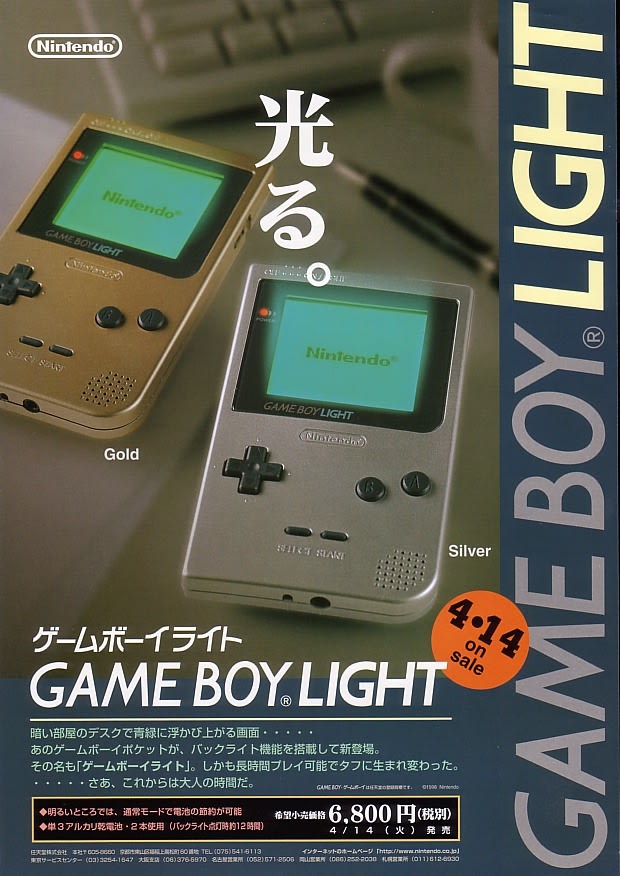 In the 90's the consoles race started to warm up. The entertainment industry was getting more and more attention. Nintendo developed other consoles both pocket sized such as Game Boy color and Advance (my first one). Playstation made its appearance, when they first their first console in 1994, and of course they also launched a pocket size console called "pocket station". It wasn't until 2004 when Playtation launched one of the most famous consoles that most of the kids had at some point. And what I loved the most about it and why I chose to do a presentation about it was the design. It's divided in sections, where we can find audio, video, processing, network... Let's remember, by the way, Internet made a difference. I was told once by some other hardware enthusiast they used to copy games through phone "beeping" and I found that amazing. Actually the anti-copy systems for games evolved through the time alongside the games themselves as the players grew more and more skilled with computers. But this is another story. Going back to the PSP, let's for example take a look at this component, for key controlling and close ups: 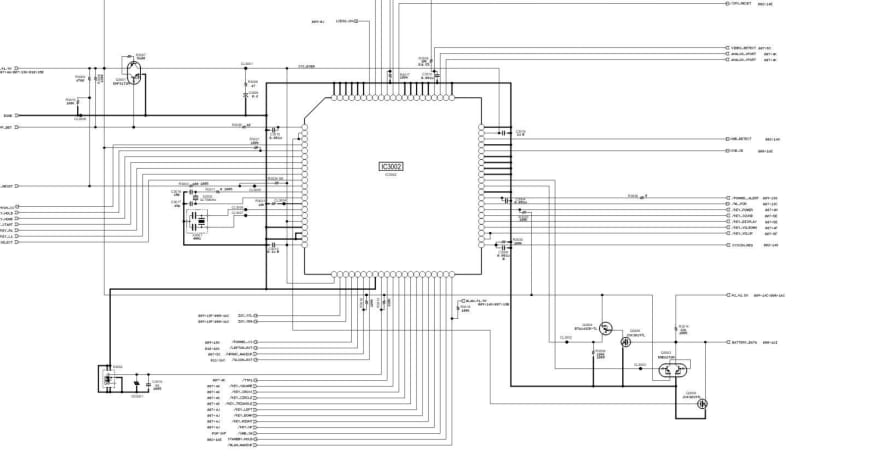 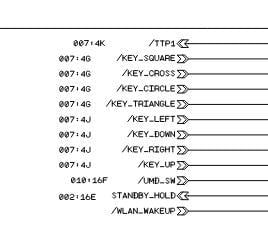 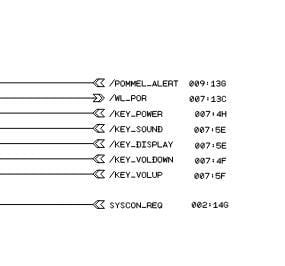 Which is located in here: 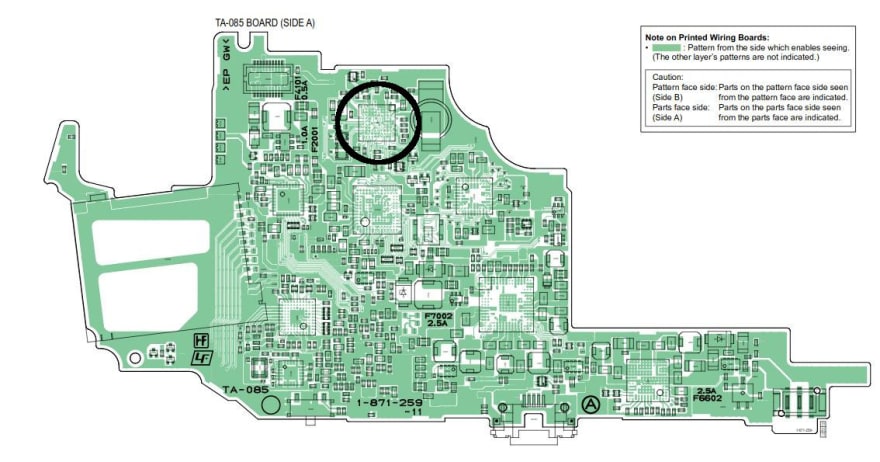 Is the figure familiar? it's not built as a single rectangle as it had to fit in the oval design made for being comfortable at handing the console. This is what I loved the most about it. It also overlap boards in order to make it work. That's what the A circle stands for, it's a guideline, like a puzzle. I bet you didn't think of this while enjoying some amazing games such as Monster Hunter or Street Fighter, eh?

The era of touching

The ideas were beginning to get old, as usually happens in tech. But in spring of 2006, the Nintendo DS appeared. The distinctive feature, this time was using not one but two screens. And more importantly the bottom one was tactile. This created a new way of interaction with the games, not every game fitted this well. I remember playing with some games as a kid and think "what the heck?" but some of them took incredible advantage of this feature. It seemed Sony focused on other things rather than designing until they launched PSP Go in 2009, and even though I remember dreaming of getting the money to buy it, it didn't succeed as they thought it would and was set aside.

On the other hand Nintendo kept developing over its DS touching system idea, and when it was again becoming old... They risked it again with the Wii. We all kind of know about this console, but to track this article again in the line of hardware, I will say one of the most enjoyable things about the Wii is hacking it and use the controllers on your computer. The worthy hardware analysis around Playstation right now is more focused on the quality of the components rather than their design, which is absolutely great but I can't feel rooted to it, so I want to end this article mentioning the designing win of the Switch console.

The winning of nicely designed consoles

The conclusion we can deduce after all is that risking in design could be decisive for a game company. Nintendo has this ability of risking a lot on this probably because it worked once with the Game Boy. Their last successful shoot after failing trying to make Wii U popular is the Switch, and it worked because they took the current situation of those who play and translated it into hardware. The biggest lap between one console and another, the choice a player had to make was "should I play on the TV or in the subway" mostly, and Nintendo here tried to mix them both. Not perfectly, but successfully enough: obviously hardware this time would mostly look like a tablet and a couple of controllers and I'm not as impressed with it as I was with the PSP, but the idea is what worths the most.

I'm leaving apart many other consoles and gaming devices such as VR kits, firstly because they are not as they should inside the industry yet, and also because I know less about them. But surely, I wish to yet discover way more consoles and to get amazed with them as I did with the old ones.

Universally Stupid: Battling USB on a microcontroller with Rust

Make a simple game with Vuejs