I decided to create a very special article. It's half sci-fi story and half true story! I will write some scenarios and stop from time to time to explain how the tech described work, making the science fiction scenario closer than it seems. Let's get to it!

The soft led lights in the edge of the bed blinked slowly letting Sian wake up comfortably. As she got up and yawned, the mirror in the bedroom showed a blinking led circle in its corner. Sian softly pressed it, and the weather information appeared in her reflection. She was still sleepy, as she noticed in the mirror, when checking out her tasks for the station maintenance. From her window she could take a look to the herbs and the food greenhouse. Some of the status leds that kept the plants monitored were on and, from her room, it looked like a starry night. Her natural dreamy mood kept her nose against the pressurized glass.

Magic mirrors are no longer magic, you can build your own ones with Raspberry Pi. Of course there are also several leds, including diffused cool ones, maybe ATmega, SAMB or ESP8266 controlled.

In other article I spoke about monitoring plants with soil moisture sensor and state led board. In this case the station has many of them, so it looks awesome from the window!

She put her comfy clothes on and took her working tablet with her. First of all she had to drink some coffee so she went to the lounge where other people where already planning their day. She put her wrist close to the coffee machine sensor, which prepared a coffee according to the physical needs she had. While waiting for her coffee, Carl approached. Carl was the main gardener of the station, although they all had to take care of everything. He was the most skilled one with plants, in any case.

"Hey there. How did you sleep?"
"Good! You know? The monitoring leds outside look beautiful. Are you gonna take care of them today?"
"Yes, after cleaning a bit the electronics lab. I know it looks cool, but that means I have tons of work, you know?" He laughed
"I know, I know. Anyway, have you seen Kei? she is supossed to help me out in the fixing workshop this morning." Sian drank a lot of her coffee at once.
"Nope." He looked around and checked again "You are right, maybe she is still sleeping."

Pulse and temperature sensors, among others, are very easy to use and can help monitoring and guiding us into a healthier routine. Mixing environmental and body sensors we can make our lives easier, starting from good temperature coffee adjusted to our needs. Maybe if you are nervous enough a lighter coffee works better for you!

Sian was in her way to visit Kei and check her in when she found the girl running in the corridor.

"Ah! Sian! I overslept, I'm sorry. I was in my way to get you." Her hair was messy and her face was sleepy.
"That's fine I brought you coffee. Although I took it with the default configuration levels, I hope you don't mind." Kei took the coffee thankfully and they started heading together to the workshop. 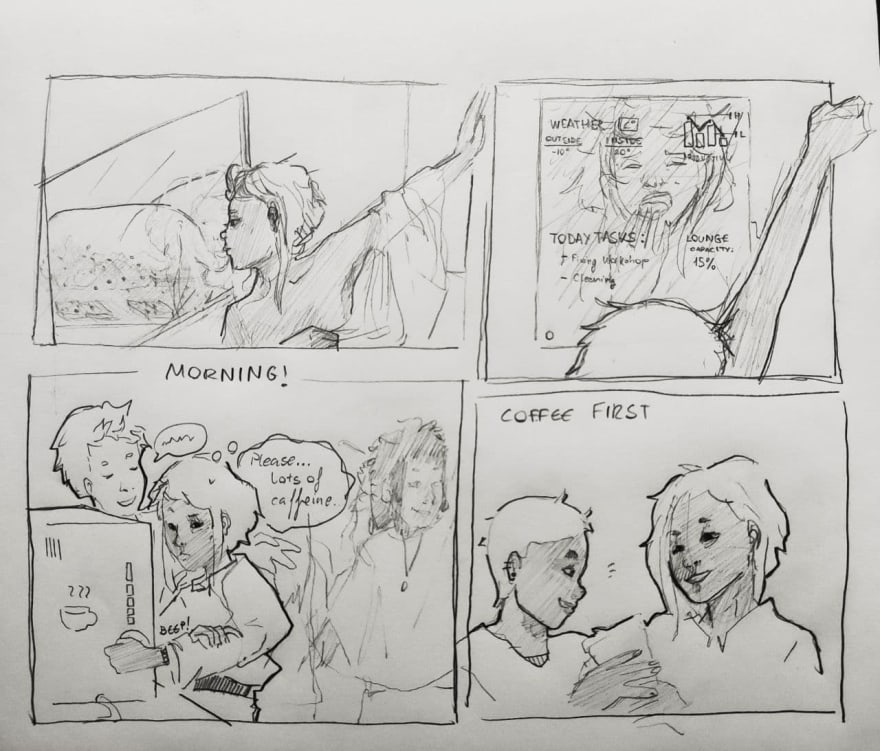 Both of them worked hard through the morning fixing the various gadgets that help them live in Deimos. Sian took the last box for that day, read the RFID tag in her working device and checked the information before starting in order to get the correct tools. Although... the information was weird.

"Hey Kei, come, look at this" Kei was changing the tags in the last projects before storing them in the fixed and broken cupboards. She stopped to see what was going on.

Thanks to making culture and kits like ifix more and more people is getting used to the DIY and fixing. Even in Europe, some laws are changing in order to force companies to create lasting, fixable devices so users don't have to keep buying new devices and wasting money, resources, material and contaminating. RFID tags and stickers are very useful. MIFARE is widely used for cards, keychains, doors, etc, but you can also store information. For example, Amiibos work with a special protected Mifare.

"Ah yes" Kei said. "That's the broken pocket-satellite Guinn found. They said it pretty badly hit the ground."
"But... did it happen in front of them? Like, suddenly?" Sian just thought that was such a coincidence.
"That's what Guinn said, few days ago. I overheard, though, you can ask them, directly. I think they're in the kitchen today. Anyway, let's look at it! Now I'm curious."

They opened the box and slowly took the satellite out. It was a pretty common design: ATMega326 based, solar panels, box-shaped. Some of the panels were broken due to the hit, but the inside PCBs resisted very nicely.

"Sian, shall I get the JTAG and all? maybe we can learn what happened, apart from the card." Kei suggested, she barely waited Sian to nod for getting the tools. After taking a look at all the gathered information, they found some nonsense. They stood in silence for a moment.
_ "Could this be..." Kei started to say. They were both thinking the same, but trying to be rational._
"I don't know." Sian concluded."Let's upload it to a repository so others can help us."

Sian started working on that while Kei prepared the work in process sign to prevent the people in the afternoon turn. They were both excited and curious.

Open sourced satellites are beginning to be a thing. Some of the components are still expensive enough to make us think twice before trying, but it's definitely a thing. If you are into this, check this searching engine for datasheets and this github repository for space craft.

I believe in technology as a way of shaping society without being the center of attention. An open, friendly society should rely on transparency. As for that I believe open repositories such as gitlab to be the key for future transparency and multidisciplinary societies.

JTAG let us hack, debug and learn about electronic devices. It uses to be very expensive but last years, some open sourced devices made this task easier.

Arduino with Python on Mac OSX 📝

Writing My Own Keyboard Driver

How to Check the Compatibility of PC Parts?

Thanks for keeping DEV Community safe. Here is what you can do to flag terceranexus6: