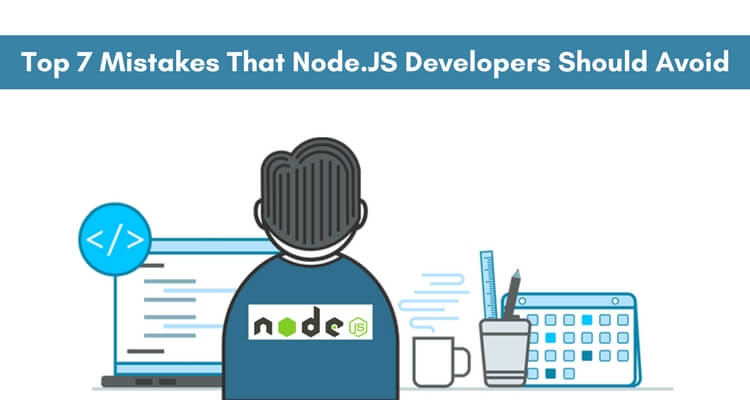 But, what is Node.js?

Node.Js is an open-source JavaScript runtime environment that provides a persistent connection from a browser, through “non-blocking” I/O API that easily optimizes any application’s scalability and throughput. This means it literally wastes no time on waiting for any I/O request to return.

Traditionally, web servers’ used to create new connection threads for every incoming request which was practical in a way but consumed a lot of resources and time. It resulted in high latency and poor performing web applications.

Node.js establishes two-way communication between the client and the web server taking a completely different approach. It executes a single-threaded event loop, which is registered with the system that can handle all connections. Each new connection runs a JavaScript callback function. This callback function can simply handle requests by non-blocking I/O calls.

The following graphic shows the market position of Node.js in regards to traffic and popularity as compared to other web servers. 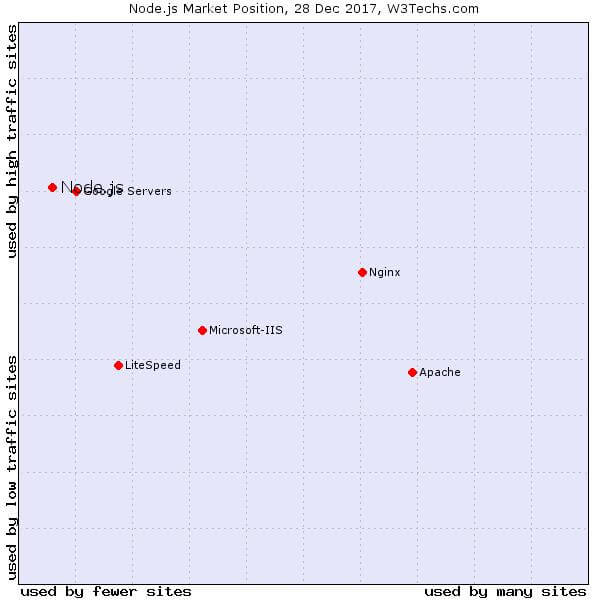 Node.js despite its various advantages needs to be properly implemented for maximum benefits. Developers need to know how to make the best out of their Node.js projects. For that, they need to first understand the major Node.js pitfalls.

At times, developers save a file and reload Node.js web application to see if it crashes fast. This results in multiple callback executions, as they forget to return after the first time. JavaScript relies on callbacks which helps it in connecting the various asynchronous elements to make them function properly.

Testing is by default the most important yet ignored part of an application development process. Once an application is ready, you should not forget to perform repetitive testing and inspection of codes. As a Node.js developer, you should keep in mind this important step. You can take help of multiple tools to perform successful testing like Mocha, Jasmine etc.

3. Lack of Profiling and Zero Monitoring

Often confused for testing, profiling is a completely different process. Profiling information helps with program optimization by studying various aspects related to the program like its space or function return time.

In Node.js applications, profiling will help you understand things like delay in the event loop, system load, and CPU load or memory usage.

Static analytical tools help you to identify application bugs and issues in the development stage only. There are many Supervisor programs as well as pm2, forever, supervisor and nodemon. These tools help you to handle multiple applications on the same machine and even manage logs. They even allow you to restart application/program on the crash.

5. Blocking of the Event Loop

As we know, that in Node.js there is single thread environment as such no two application parts run parallel to each other. Also, anything that blocks any event loop will block the entire loop. This may happen when a CPU-bound request is connected to various clients that eventually block the event loop, making every client wait.

Here, tools like StrongOps and open-source modules can help you with detecting delays in event loop easily.

This can be done by breaking things in tiny modules and pasting to NPM. This will simplify testing and reading of the code. Node supports the building of tiny modules helping you achieve modularity in your Node applications.

7. Considering Number to be Integer Data

Developers can sometimes consider the grave mistake of considering the number to be an integer data. In JavaScript, these are called the floating point data. Any miscalculation of the float can make the entire system go wrong.

The creator of Node.js – Ryan Dahl, identifies non-blocking of I/O the major advantage of the platform. While some Node.js developers might worry about the single event loop getting blocked in case of larger number of CPU cycles, the ability to divide processes into tiny modules make Node.js the perfect platform for building web applications. This might be the reason why major companies like Netflix, Walmart, LinkedIn, PayPal and NASA used Node.js to build their primary applications.