It’s been a while since I have written a blog and now since most of us are working from home we sort of have a considerable amount of time at hand and I thought why not write about my recent experience of fixing a security vulnerability.

So if any of you in the recent time have seen something like this image below and have no clue how to fix it then this article is for you. When I saw it, I had no clue either but with some research I could fix this.

So what this means is one of the dependencies in your package.json has some security implications which can be exploited by an attacker and can cause problems for you, your product or the company you work for.

This vulnerability could have caused a Regular Expression Denial of Service

In order to find potential vulnerabilities in your repo, you can either do

Today when I started working I had to deal with this error where acorn and minimist were being reported as security vulnerabilities.

Solution to this problem is in steps:-

1) This is the first thing you should do and it's the simplest one too.

In an ideal scenario, this should have upgraded your dependencies to the next semver version and those libraries might have already fixed the version of there transitive dependencies.

2) But if that did not fix your issue, which for minimist did not fix for me, then follow the below mentioned steps:

2.1) To fix any dependency, you need to first know which npm package depends on that.

This will tell you the packages which are vulernable.

A quick glance into package-lock.json can give you more information around the affected version.

3) And finally the fix was:

3.1) First npm install the non-vulnerable version, which in my case was 1.2.5

For yarn and npm users

3.2) Add a resolutions key in your package.json file

For npm users, we need one more step for that resolutions key to work.

That’s it. That solves the dependency issues which can not be updated using either npm update or by uninstalling and reinstalling a new dependency.

To check if the dependency works correctly

This should give you an output like the image below 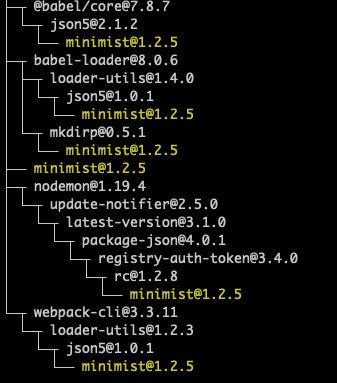 If some packages are only compatible with an older version, then this change might break your app. So be careful while resolving to a particular version and test your app before releasing this change.

Also please don’t forget to maintain social distance to prevent the virus from spreading and wash your hands regularly. Stay safe and stay at home.

Once suspended, viveknayyar will not be able to comment or publish posts until their suspension is removed.

Once unsuspended, viveknayyar will be able to comment and publish posts again.

Once unpublished, all posts by viveknayyar will become hidden and only accessible to themselves.

If viveknayyar is not suspended, they can still re-publish their posts from their dashboard.

Once unpublished, this post will become invisible to the public and only accessible to Vivek Nayyar.

Thanks for keeping DEV Community 👩‍💻👨‍💻 safe. Here is what you can do to flag viveknayyar:

Unflagging viveknayyar will restore default visibility to their posts.