Intro
Requirements
VPS Provider and Servers
Technologies used
How a node works
How the core server works
To sum up
What didn't work
Why it took so long?

This is my first article so it might not be perfect 😇

Almost a year ago I decided to build an uptime monitoring service, which resulted in https://pingr.io.

It is a web app that continuously checks that your URL responds with 200 OK or any other response code you prefer.

So the idea is pretty straightforward. You might think that it's not that hard to make an HTTP request after all.

In this article I want to describe how it works.

I don't claim that the architecture is good.

The architecture is somewhat the compromise between launching your product asap and having excellent architecture.

I didn't want to spend yet another year of making it perfect, since it's pretty hard to keep motivation during the development.

I'd love to hear what can be improved and where I did it completely wrong.

At first, it seems like it's an easy task to make an HTTP request. However, there are a lot of requirements for what the service should do. Here are some of them:

I think that if you want to have your product up and running as soon as possible, it's okay to pay more for services which you you are comfortable with.

Regarding MySQL. In the beginning, I used their RDS, since it's meant to be used as a database, and everything should've been cool. But when I wanted to change my.cnf I realized that I couldn't do that. And I like to have control of everything, at least in the beginning while I'm learning.

So, for now, I decided to have just a VPS with MySQL installed since it gives me more control.

When I was writing this article, I realized that it might help a lot if I list all the Laravel's commands which I use here:

How a node works

This is one of the most important parts of the article, which describes how a single node works.

I should note that I have a Monitor entity, representing a URL that should be checked.

Getting monitors ready for uptime check

The php artisan monitor:run-uptime-checks command fetches monitors from the database based on some conditions.

One of the requirements is uptime check frequency, which means how often we should check the monitor. Not every user wants to check their sites every minute.

Then, using Laravel scheduling mechanisim, it's easy to setup running this command with different frequencies.

Passing frequency as an argument helps me to get only the monitors I need to check, depending on what frequency the user has set.

Filling up the queue

Then I put the uptime check jobs into the Redis queue for every monitor I have. This is what happens in RunUptimeChecks command:

👉 You may notice here something strange: (object) $monitor->toArray().

At first, I passed the Monitor model to the job. However, there is a significant difference: when you pass a model to a job, it stores just a model id in the queue. Then, when the job is being executed, Laravel connects to the database to fetch the model, which resulted in hundreds of unnecessary connections.

This is why I passed an object instead of the actual model, which serialized quite well.

Another possible approach is removing the SerializesModels trait from the job, which also might work, but I haven't tried that.

So after this operation, we have some number of jobs in the queue ready to be executed. 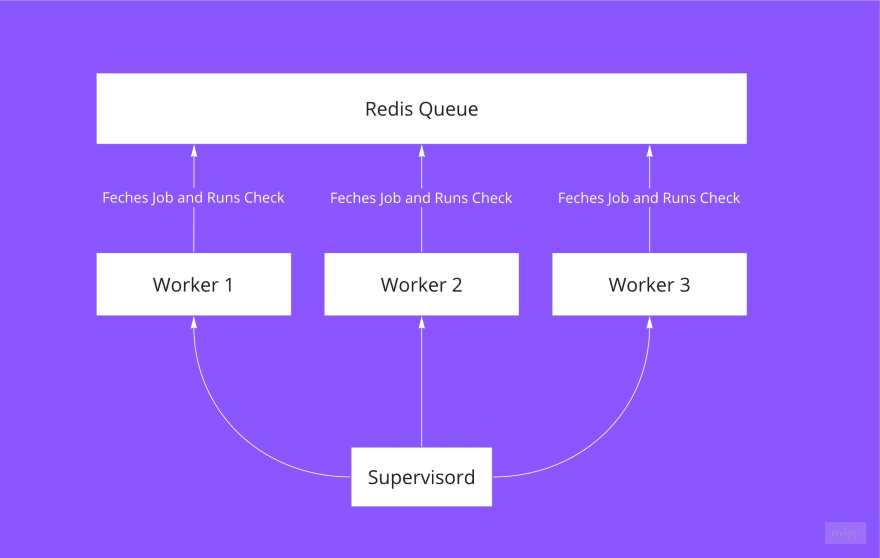 To execute the jobs, we need to run the php artisan queue:work command.

What we also need is:

For this purpose, I used Supervisord.

What it does is it spawns N number of PHP processes, every process is queue:work command. If it fails, Supervisord will rerun it.

Depending on VPS Memory and CPU cores, we might vary the number of processes. Thus, we can increase the number of uptime checks performed per minute. 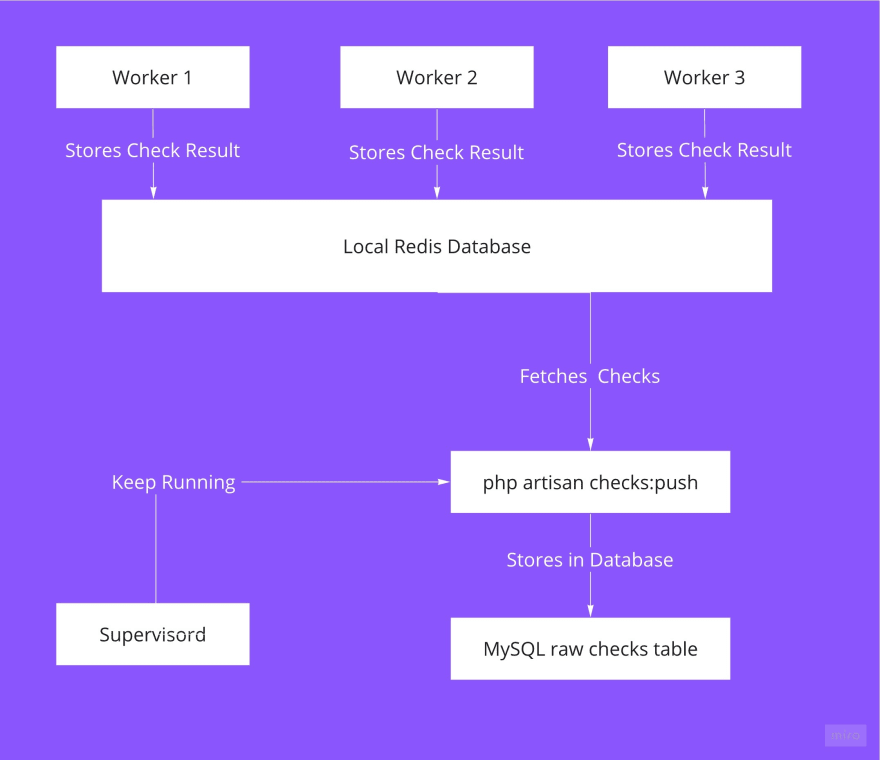 Now, after we ran a check, we need to store it somewhere.

First, I store the check result in the local Redis database.
Since there might be many processes that continuously push data to the queue, it fits perfectly for this purpose, since Redis is an in-memory database and is very fast.

Then I have another command php artisan checks:push that fetches the checks from the Redis database and does the batch insert into the raw_checks MySQL table.

So I got two tables: monitor_checks and raw_checks. The first one contains the latest successful check of a monitor and all of its failed checks. I do not store every check of every node per minute, since it'll result in billions of records and it doesn't provide much value for end-users.

The raw_checks table serves as a bridge between the core server and all nodes servers.

After each check we need to do a lot of stuff:

It would be much more reasonable to fetch many checks at once and do all calculations on a server located close to the MySQL server.

For example, the connection between the Indian node and the MySQL server located in Germany is relatively slow.

So the aim is to make the nodes as independent as they can be.

All they do regarding MySQL connection is: fetch monitors which should be checked & store results of checks. That's it.

How the core server works

At the core server, I run the php artisan:checks-pull command, which behaves like a daemon: it has an infinite loop that fetches checks from the raw_checks table and calculates such things as average uptime, response time, and some others.

Apart from that, it is responsible for queueing jobs for downtime notifications.

That's actually it: we have monitors with updated status, uptime & response time attributes.

In order to update monitor status on the web app, I use Pusher and Laravel's broadcasting feature.

So the setup is straightforward.

Every node has the same mechanism. Now, having a constant stream of checks from the raw table, the core server can do many things like calculated average response time from a node, etc.

If I want to extend the number of nodes, I'll just clone the node server, do some small configuration, and that's it.

I tried both the sub/pub features of Redis and just storing the data. So I gave up and used a mechanism that is familiar for me: MySQL.

Also, I think I've read somewhere that Redis is not the best solution if we need 100% confidence in storing data.

Why did it take so long?

Because of multiple factors.

What is Alternative Data - Complete Guide 📊

Once suspended, vponamariov will not be able to comment or publish posts until their suspension is removed.

Once unsuspended, vponamariov will be able to comment and publish posts again.

Once unpublished, all posts by vponamariov will become hidden and only accessible to themselves.

If vponamariov is not suspended, they can still re-publish their posts from their dashboard.

Once unpublished, this post will become invisible to the public and only accessible to Victor.

Thanks for keeping DEV Community 👩‍💻👨‍💻 safe. Here is what you can do to flag vponamariov:

Unflagging vponamariov will restore default visibility to their posts.