In the previous post, we added a powerful tool in our arsenal known as Wildcards. Wildcards are special characters that help us rapidly specify groups of filenames. These characters are *, ?, [characters],[!characters] and [[:class:]].

So where should we start? What is the first thing we require for manipulating files and directories?

Yup! You guessed it. The first thing we need to know is how do we create these directories?

The mkdir command stands for "make directory" is used to create a new directory.

The syntax for mkdir command

For creating a new directory we only need to call mkdir command along with the directory_name.

In the above example, we created a directory by simply using the command mkdir and the directory_name logs. Then we used ls command to verify that the directory with the name logs has been created.

In the above example, we created directories logs1, logs2, and logs3 at one go.

Okay, so we mention all the directory_names we want to create after mkdir.

What if we wanted to create a nested directory?

So for the above scenario we probably need to run mkdir 3 times one for each level.

What if I tell you that it will only take a single command to create such a nested directory.

Let's check it out 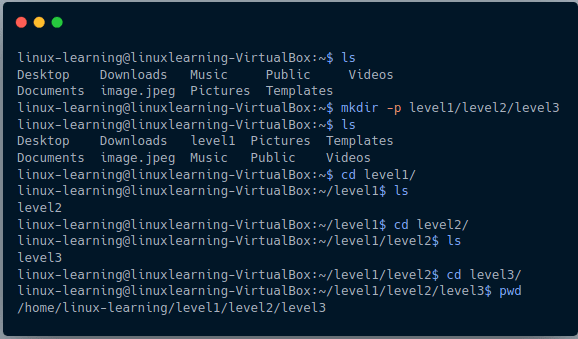 In the above example, we use an option -p which allowed us to create a nested path in a single command

To verify that the directories have been created properly we get into the directory using cd command and then traversed all the way till level3 and to check the current working directory we used pwd command.

That made creating a nested path so easy for us.

But there is still another problem what if we need to create 100 directories?

So do we need to write the name of all the directories even though the only thing that changes in the folder name is the number at the end?

No, we don't need to write the names of all the directories.

How will this be possible then? 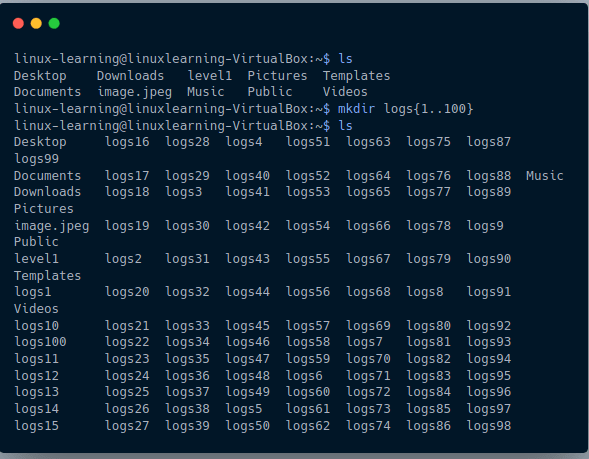 In the above example, we created 100 directories using a simple command mkdir logs{1..100}

Okay, we know mkdir but what is the meaning of logs{1..100} in the above command.

The {} is known as brace expansion. So the logs is the prefix that was common in all the directories and {1..100} represents numbers 1 to 100.

The Linux Command Line reads the above command as
mkdir logs1 logs2 logs3 ..... till logs100

In operations such as this, the true powers of command line come forward because doing these types of operations from GUI will take us a lot of time but when the same operation is performed using the command line it takes less than a second.

The next question that comes into our mind is whether this is possible only with numbers?

No, we can use it with alphabets as well. We tried the first one together now why don't you try this on your own I will give you a hint we can write alphabets as {a..z} or {A..Z}.

Okay, the brace expansion seems to be very powerful but can we use this in the real-life scenario? 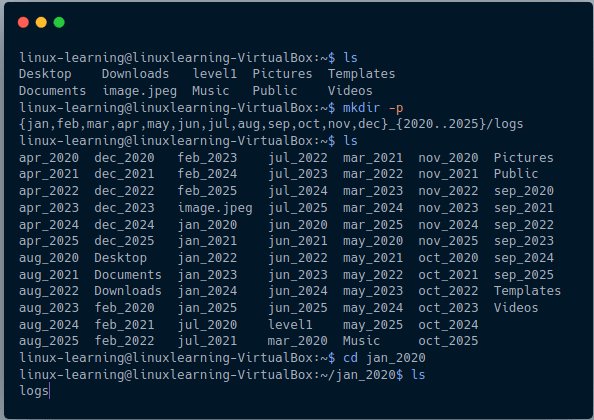 So that was the mkdir command.

Next, we want to find out how to create files.

So there are many ways we can create a file but we are going to be looking at the most basic way to create a file.

The syntax for touch command

In the above example, we created a file by simply using the command touch and the file_name notes.txt. Then we used ls command to verify that the file with the name notes.txt has been created.

In the above example, we created files notes1, notes1, and notes1 at one go.

Okay, so we mention all the file_names we want to create after touch.

So the touch command works for files just as the mkdir works for the directories. 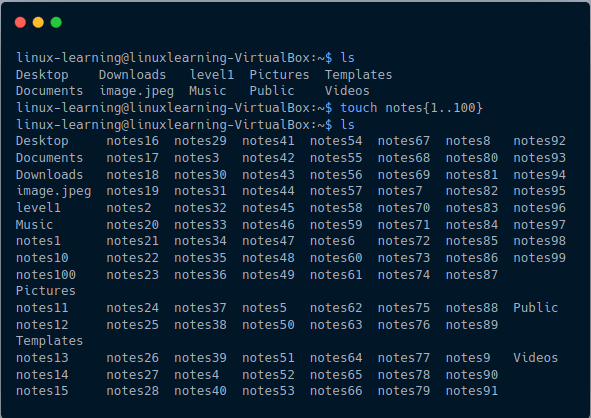 In the above example, we saw the use of bracket expansion along with the touch command.

Now let's take a real-life scenario, let us expand the scenario we discussed during the creation of a directory 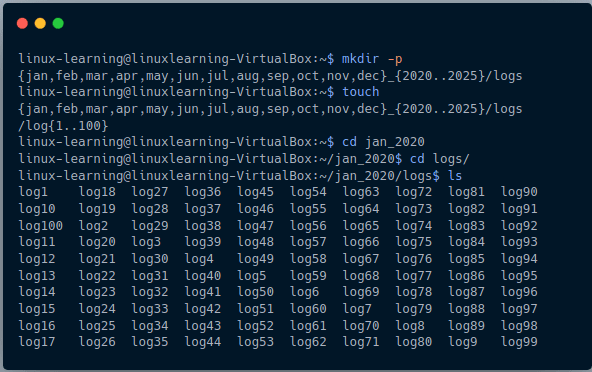 In the above example, we first created the directories from jan_2020 till dec_2025 each having a directory named logs and then we used the command

where {}_{}/logs specifies all the directories where files are to be created and log{1..100} creates the files in each of the specified directories.

Okay, so that’s all the commands we need to know for Creating Files and Directories in Linux System.

In the next post, we will look into Deleting Files and Directories in Linux System.

I hope you understood the basics of exploration in Linux. Please, let me know if there are any questions.

How To Place Text Behind An Image In Photoshop?