Firefox may no longer be the go-to browser for most developers.

However, those of us who were present in the First Browser War in the 90's remember Firefox —originally named Phoenix, born from the ashes of Netscape— as a strong contender for the Heavyweight Championship.

I still use Firefox (simultaneously with Chrome) since it has a special place in my heart, plus many nifty features that keep me coming back.

In particular, I am in love with their new multi-line editor: 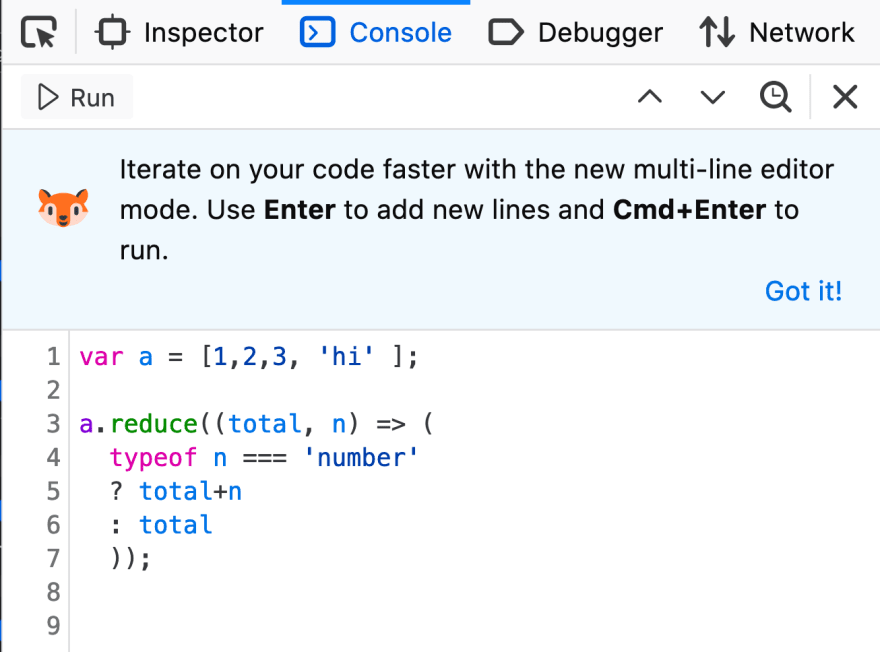 To toggle it, find a tiny button hidden on the upper right corner of the console:

It was introduced last December and as a heavy console user (read: someone who is lazy to run node locally more often than not), it is a feature that caught my attention right away.

Here it is in action:

So what does it do that Chrome doesn't?

I mostly use the console to make sure that I test Stack Overflow answers properly (pro-tip: posting wrong answers on Stack Overflow will send your reputation down south very quickly).

If you use Chrome's console and need to edit a function or a snippet multiple times, you will need to juggle between Enter and Shift+Enter, something I don't find particularly pleasant.

You can also do multi-line snippets on Chrome creating a new snippet, or through third-party extensions, but so far I prefer Firefox's UI.

I have been using the console to run Leetcode exercises quickly, since their editor takes a bit of time to compile, and Firefox's multi-line editor is perfect for that.

In the end, Chrome satisfies my browsing and developer needs, but I am happy to see the latest trend in innovation and privacy from Mozilla.

Do you still use Firefox? Are there any features that keep you from forever uninstalling it? Let me know in the comments: 👇