Unless you have been living under a rock; you must be aware of the project Deno. Yes it's the project by the same guy who wrote Node.js and according to him it's his redemption from mistakes he did in Node.js:

10 Things I Regret About Node.js

While project is written in Rust and it uses the same v8 engine under the hood. He made one interesting choice this time around. He selected Typescript as a primary language instead of JS.

Now is it a good or bad choice is a separate debate and only time will tell. I personally believe typed languages have more milage than dynamic languages both in terms of perf tuning and developer scalability. One might disagree; but after the Node.js hype is dead we can clearly see players like Golang and mid-evil dinosaurs like Java/C++/C/C# still holding top spots.

While browsing through Deno's source code I had a thought about how about if Deno can pre-compile TS projects into single binary like Go does? How about not having to rely on JIT and complex pipeline of V8 at all? If somebody writes strictly typed code we can benefit a lot from type hinting that Typescript has and still keep the nice features.

While somebody in Microsoft is struggling to find a feature that can get him his next promotion, I am wishing for something else. With CLR now cross-platform drop the C# ball and write us a Typescript Native compiler. In my opinion Microsoft has better odds of success with a huge community that already understands and writes Typescript! Microsoft can go head on with Golang and increase chances of .Net core being more well adopted than where it is right now. I will drop Golang if somebody can give me a nice syntax like Typescript with all the performance goodness that I can get from Golang.

Seriously WTF; I gave up almost on it

There's an EDIT POST button beside the title of your article, e.g. 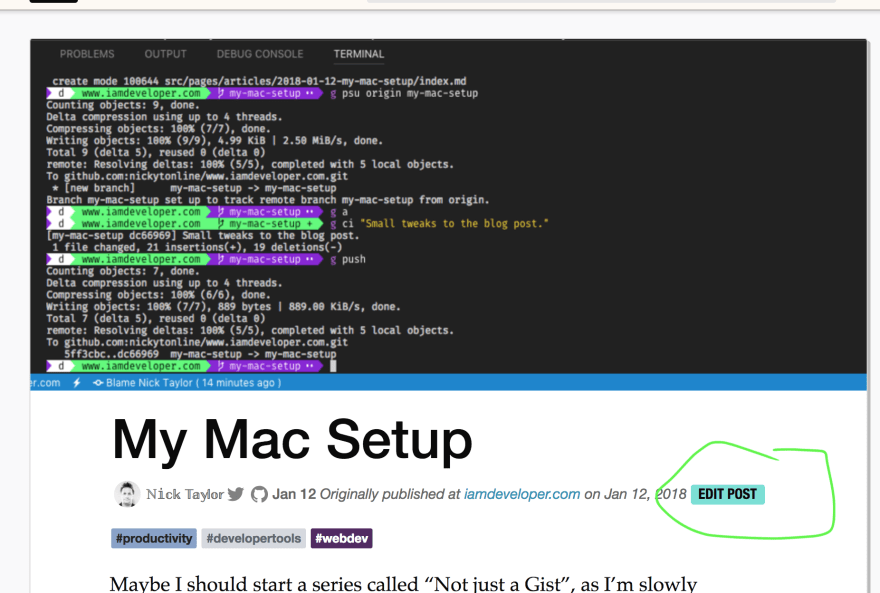 Bad design!!! It was right in front of my eyes and the cognitive load made me ignore it.

dev.to is open source in case you want to fix the "bad design".

box-shadow vs drop-shadow() in CSS