Today's algorithm of the day is the Reverse String problem:

Write a function that reverses a string. The input string is given as an array of characters char[].

Do not allocate extra space for another array, you must do this by modifying the input array in-place with O(1) extra memory. You may assume all the characters consist of printable ascii characters.

This kind of problem (and variations on it) pop up all the time, so knowing how to modify an array in place is a super useful skill.

Today, I'm going to be solving this problem with two pointers--one at each end of the array--and "swapping" the letters at those spots. I'll start by going over the approach I'll be taking, and then I'll code out the solution using JavaScript.

The idea behind a two pointer solution is to have a pointer at each end of a word (or array), to swap the letters at those points, and to keep moving the two pointers toward the middle of the word. By the time the pointers meet in the middle, the word will be reversed.

To better explain this idea, I'll use an example. We'll start with the word "TANDEM", and two pointers. The left pointer is at start, the "T", and the right pointer is at the end, the "M". 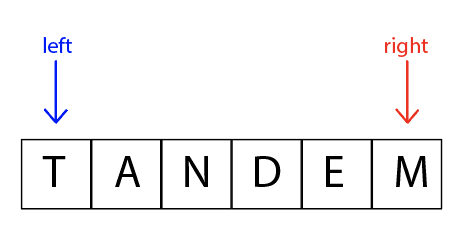 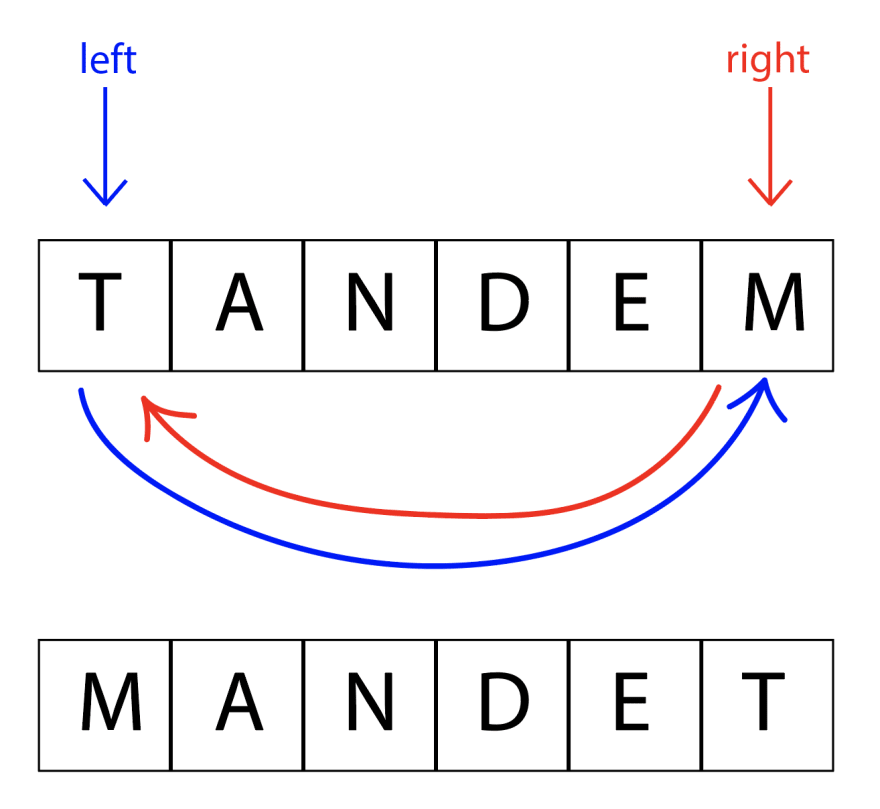 Now we can move our pointers toward the center. The left pointer is now on the "A", and the right pointer is on the "E". We will swap these letters, putting the "A" where the "E" was, and the "E" where the "A" was. After swapping, we get "MENDAT". 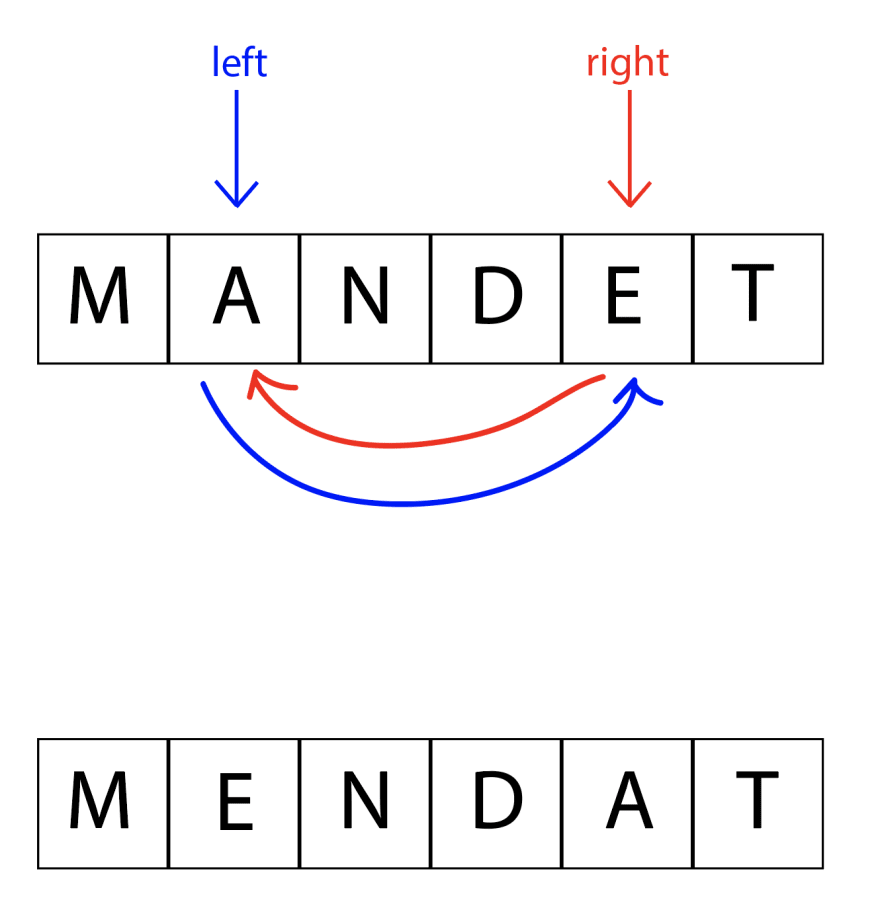 Again we move the pointers toward the center. The left pointer is on "N", and the right pointer is on "D". We'll swap these letters, and we have "MEDNAT", which is "TANDEM" backwards. 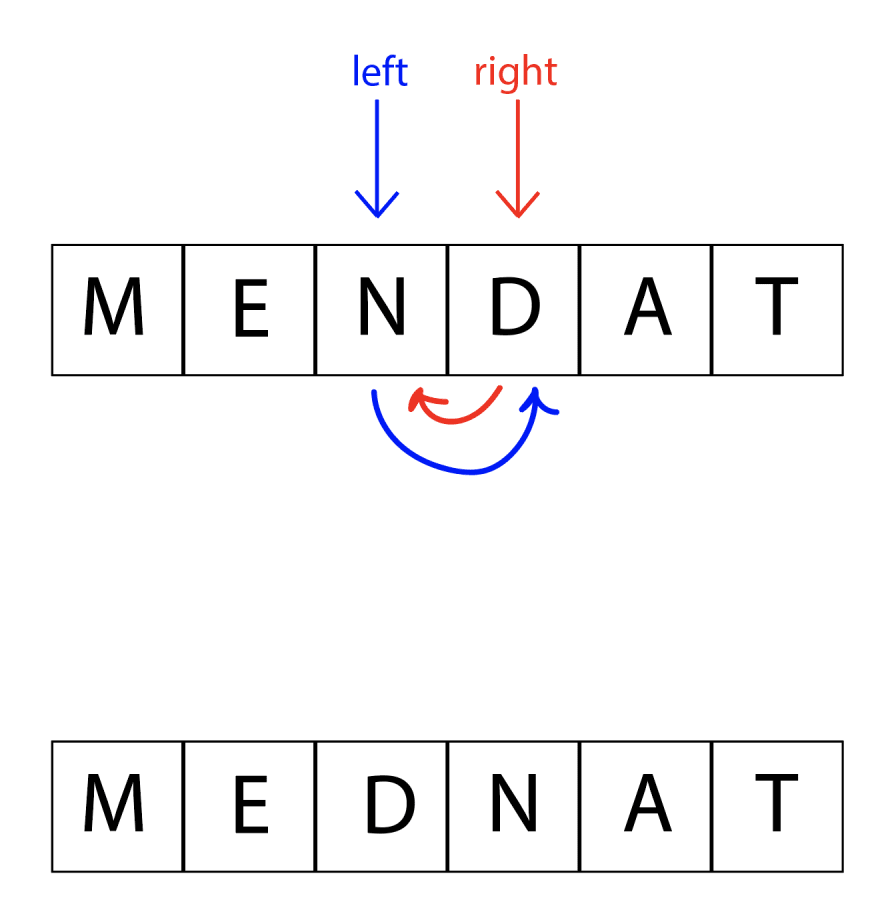 We know to stop because we always want the left pointer to be to the left of the right pointer. In other words, we'll want the process to keep going until the pointers meet at the middle.

We'll want to keep doing something until left and right meet at the middle, which means this is a good time to use a while loop. As long as left is less than right (aka to the left of right), we'll want to be swapping the letters.

Without temporary variables, therefore, we wouldn't have a way of "remembering" which variable used to be at the index.

As always, let me know in the comments if you have any questions or ideas!

Once suspended, alisabaj will not be able to comment or publish posts until their suspension is removed.

Once unsuspended, alisabaj will be able to comment and publish posts again.

Once unpublished, all posts by alisabaj will become hidden and only accessible to themselves.

If alisabaj is not suspended, they can still re-publish their posts from their dashboard.

Once unpublished, this post will become invisible to the public and only accessible to Alisa Bajramovic.

Thanks for keeping DEV Community 👩‍💻👨‍💻 safe. Here is what you can do to flag alisabaj:

Unflagging alisabaj will restore default visibility to their posts.