Closures can be a daunting concept when you are new to JavaScript world. Scouring the internet will give you tons of definition about what closure is. But I have felt that mostly these definitions are vague and don’t explain the fundamental cause of their existence.

Today we will try to demystify some of these concepts which are part of the ECMAScript 262 specs, including Execution Context, Lexical Environment, and Identifier Resolution. Additionally, we will learn that because of these mechanisms, all functions in ECMAScript are closures.

I will explain the terminology first and then show you some code examples explaining how all these pieces work together. This will help to solidify your understanding. 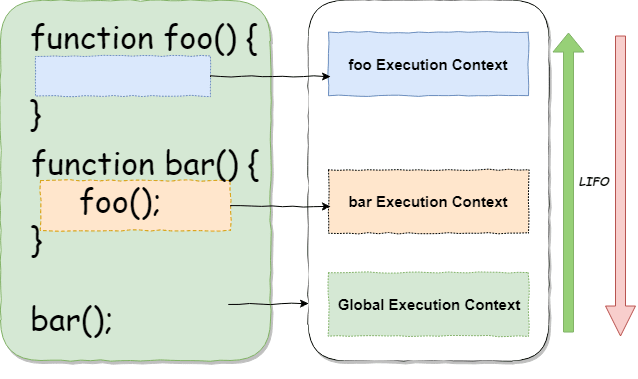 Let’s see what happens when our code is executed as shown in the picture above:

Execution stack works on a LIFO data structure way. It waits for the topmost execution context to return before executing the context below.

Conceptually, Execution context has a structure which looks like the following:

Don’t worry if structure looks intimidating. We will look at these components shortly. The key point to remember is that every call to execution context has two stages: Creation Stage and Execution Stage. Creation Stage is when the context is created but not invoked yet.

A few things happen in the creation stage:

Now, let’s try to understand what is a lexical environment.

According to ECMAScript specification 262 (8.1):

A Lexical Environment is a specification type used to define the association of Identifiers to specific variables and functions based upon the lexical nesting structure of ECMAScript code. 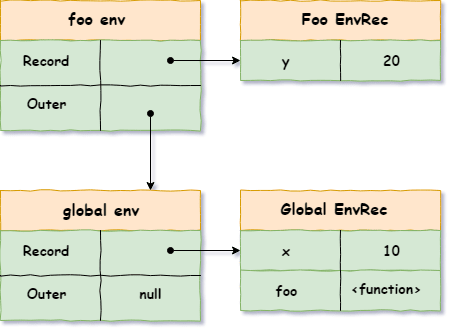 As you can see when trying to resolve the identifier “y” in the foo context, the outer environment (global) is reached out. This process is called identifier resolution and happens on running execution context.

Now, armed with this knowledge of Environments, let’s get back to the structure of Execution context and see what’s happening there:

Both VE and LE by their nature are lexical environments, i.e both statically(at creation stage) captures the outer bindings for inner functions created in the context. This mechanism gives rise to closures.

Capturing the outer binding statically for inner functions give rise to the formation of closures.

Before understanding the closure, let’s understand how the scope chain is created in our execution context. As we saw earlier, each execution context has LexicalEnvironment which is used for identifier resolution. All the local bindings for the context are stored in the environment record table. If identifiers are not resolved in the current environmentRecord, the resolution process will continue to the outer (parent) environment record table. This pattern will continue until the identifier is resolved. If not found, a ReferenceError is thrown.

This is very similar to the prototype lookup chain. Now, the key to remember here is that LexicalEnvironment captures the outer binding lexically (statically) on context creation stage and used as it is on the running context (execution stage).

As we saw in the previous section that upon function creation stage, statically saving of outer binding in the LexicalEnvironment of inner context gives rise to closures regardless of whether a function will be activated later or not. Let see that in an example:

The LexicalEnvironment of foo captures the binding “a” at creation time, which was 10. So, when foo is invoked later (at execution stage), the “a” identifier is resolved with a value of 10 but not 20.

Conceptually, the identifier resolution process will look something like this: 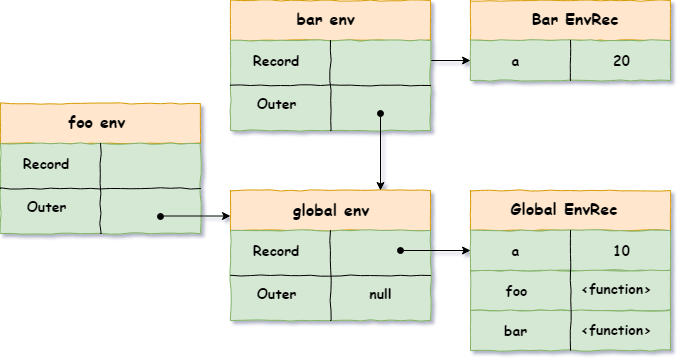 When the outer function returns, its execution context is popped out from the execution stack. But when we invoke the innerFunc() later, it still manages to print out the correct value because LexicalEnvironment of inner function statically captured the “id” binding of its outer (parent) environment when it was created. 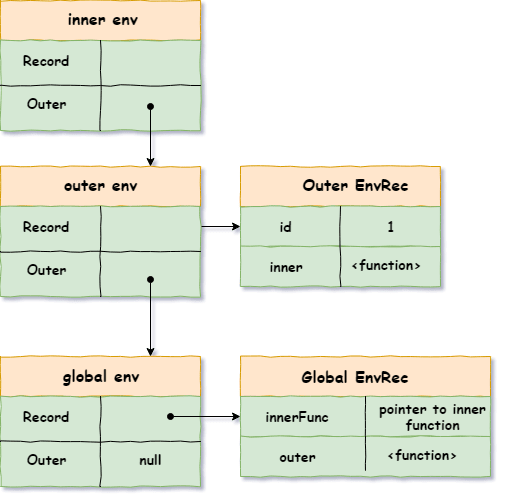 I hope this article was fun to read and wasn’t overwhelming. If you liked the article, a few ❤️ will definitely make me smile. Happy coding 😊.