JavaScript is an interesting language and we all love it because of its nature. Browsers are the home for JavaScript and both work together at our service.
JS has a few concepts where people tend to take it lightly and sometime may tumble over. Concepts like prototyping, closures and event-loops are still one of those obscure areas where most of the JS developers take a detour. And as we know “little knowledge is a dangerous thing”, it may lead to making mistakes.

Let’s play a mini-game where I am going to ask you a few questions and you have to try answering all of them. Make a guess even if you don’t know the answer or if it’s out of your knowledge. Note down your answers and then check the corresponding answers below. Give yourself a score of 1 for each correct answer. Here we go.

Disclaimer: I’ve used ‘var’ purposely in some of the following code snippets so that you guys can copy paste them into your browser’s console without running into SyntaxError problem.
But I don’t condone the usage of ‘var’ declared variables. ‘let’ and ‘const’ declared variables make your code robust and less error-prone.

Question 1: What will be printed on the browser console?

Question 2: Will output be the same if we use let or const instead of var?

Question 3: What elements will be in the “newArray”?

Question 4: If we run the ‘foo’ function in the browser console, will it cause a stack overflow error?

Question 5: Will the UI of the page (tab) remains responsive if we run the following function in the console?

Question 6: Can we somehow use the spread syntax for the following statement without causing a TypeError?

Question 7: What will be printed on the console when we run the following code snippet?

Question 8: What value xGetter() will print?

Now, let’s try to answer each question from top to bottom. I will give you a brief explanation while trying to demystify these behaviors along with some references.

Answer 1: undefined.
Explanation: The variables declared with var keywords are hoisted in JavaScript and are assigned a value of undefined in the memory. But initialization happens exactly where you typed them in your code. Also, var-declared variables are function-scoped, whereas let and const have block-scoped. So, this is how the process will look like:

Answer 2: ReferenceError: a is not defined.
Explanation: let and const allows you to declare variables that are limited in scope to the block, statement, or expression on which it is used. Unlike var, these variables are not hoisted and have a so-called temporal dead zone (TDZ). Trying to access these variables in TDZ will throw a ReferenceError because they can only be accessed until execution reaches the declaration. Read more about lexical scoping and Execution Context & Stack in JavaScript.

Answer 3: [3, 3, 3].
Explanation: Declaring a variable with var keyword in the head of for loop creates a single binding (storage space) for that variable. Read more about closures. Let’s look at the for loop one more time.

If you let-declare a variable, which has a block-level scope, a new binding is created for each loop iteration.

Another way of solving this quirk would be to use closures.

Answer 4: No.
Explanation: JavaScript concurrency model is based on an “event loop”. When I said “Browsers are the home for JS”, what I really meant was that browsers provide runtime environment to execute our JavaScript code. The main components of the browser include Call stack, Event loop, Task Queue and Web APIs. Globals functions like setTimeout, setInterval, and Promise are not the part of JavaScript but the Web APIs. The visual representation of the JavaScript environment can be something like as shown below: 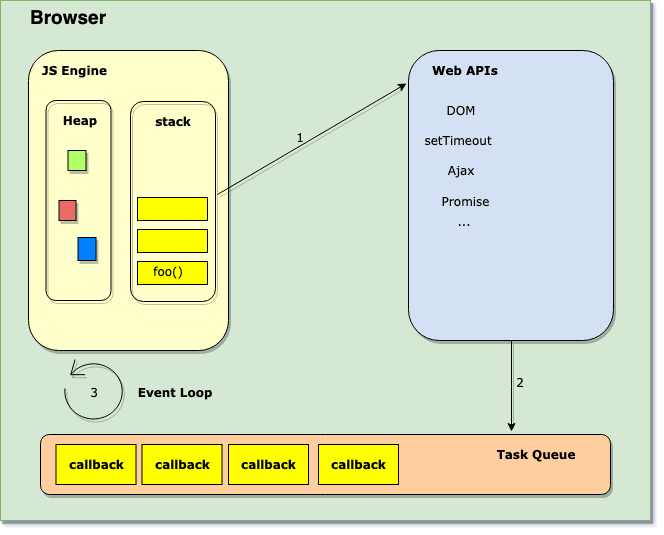 JS call stack is Last In First Out (LIFO). The engine takes one function at a time from the stack and runs the code sequentially from top to bottom. Every time it encounters some asynchronous code, like setTimeout, it hands it over to the Web API (arrow 1). So, whenever an event is triggered, the callback gets sent to the Task Queue (arrow 2).

The Event loop is constantly monitoring the Task Queue and process one callback at a time in the order they were queued. Whenever the call stack is empty, the loop picks up the callback and put it into the stack (arrow 3) for processing. Keep in mind that if call stack is not empty, event loop won’t push any callbacks to the stack.

For a more detailed description of how Event loop works in JavaScript, I highly recommend watching this video by Philip Roberts. Additionally, you can also visualise and understand the call stack via this awesome tool. Go ahead and run the ‘foo’ function there and see what happens!

Now, armed with this knowledge, let’s try to answer the aforementioned question:

Answer 5: No.
Explanation: Most of the time, I have seen developers assuming that we have only one task queue in the event loop picture. But that’s not true. We can have multiple task queues. It’s up to the browser to pick up any queue and processes the callbacks inside.

On a high level, there are macrotasks and microtasks in JavaScript. The setTimeout callbacks are macrotasks whereas Promise callbacks are microtasks. The main difference is in their execution ceremony. Macrotasks are pushed into the stack one at a time in a single loop cycle, but the microtask queue is always emptied before execution returns to the event loop including any additionally queued items. So, if you were adding items to this queue as quickly you’re processing them, you are processing micro tasks forever. For a more in-depth explanation, watch this video or article by Jake Archibald.

Now, when you run the following code snippet in your console:

Every single invocation of ‘foo’ will continue to add another ‘foo’ callback on the microtask queue and thus the event loop can’t continue to process your other events (scroll, click etc) until that queue has completely emptied. Consequently, it blocks the rendering.

Answer 6: Yes, by making object iterables.
Explanation: The spread syntax and for-of statement iterates over data that iterable object defines to be iterated over. Array or Map are built-in iterables with default iteration behaviour. Objects are not iterables, but you can make them iterable by using iterable and iterator protocols.

In Mozilla documentation, an object is said to be iterable if it implements the @@iterator method, meaning that the object (or one of the objects up its prototype chain) must have a property with a @@iterator key which is available via constant Symbol.iterator.

The aforesaid statement may seem a bit verbose, but the following example will make more sense:

You can also use a generator function to customize iteration behaviour for the object:

Now having this knowledge in your bag, it should be easy to understand why our code printed those specific properties:

Answer 8: 10.
Explanation: When we initialised x into the global scope, it becomes the property of the window object (assuming that it’s a browser environment and not a strict mode). Looking at the code below:

We can assert that:

To retrieve the value of foo.x, we can create a new function by binding the value of this to the foo object using Function.prototype.bind.

That’s all! Well done if you’ve got all of your answers correct. We all learn by making mistakes. It’s all about knowing the ‘why’ behind it. Know your tools and know them better. If you liked the article, a few ❤️ will definitely make me smile 😀.

What was your score anyway 😃?