Over this past month, I've managed to get a package, with little to no users, to accumulate over one million downloads 🚀.

It didn't cost any money, no laws were broken (I think) and it took little to no effort.

Here's what you need to know about the downloads statistic on NPM.

🔮 The illusion of downloads

If you've ever looked at using a new package from NPM, the chances are you've considered the "Weekly Downloads" statistic.

It's the first metric displayed on the page - so it must be useful information for the user... right? 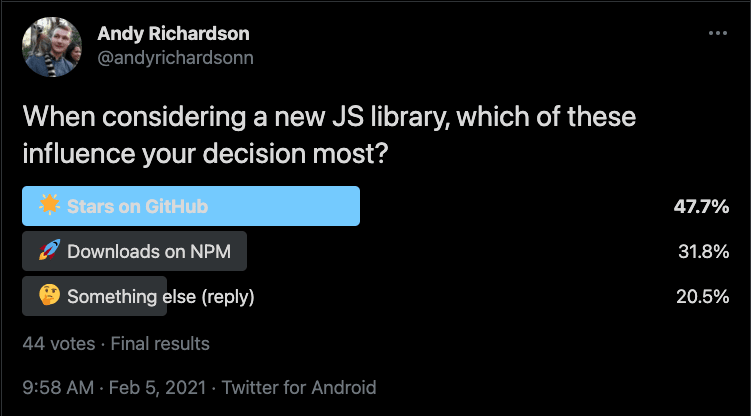 A third of people who responded to this poll seemed to think so and even go as far as to say it has a large influence in their decision to adopt a new package.

But here's the thing, it isn't a useful metric for the following two reasons:

This was pretty well discussed on the NPM Blog but to summarise, it's any successful download of a package (tarball) from NPMs registry.

NPM have openly stated that this this statistic has no consideration for the source (IP, user agent, etc). Meaning all downloads are equal, whether it be from:

As you can imagine, this means a project with frequent CI runs is likely to have more of an influence on download statistics than any set of individuals (especially when taking npm client caching into consideration).

Disclaimer: I've documented this to bring light to how easily exploitable download statistics are. However, I strongly advise that you don't do this as it is both dishonest an unnecessary drain on NPM Inc's resources.

If you've read everything up until this point, you'll know that there isn't a need for any kind of "genius hacker exploit".

Instead, all we need is some way of downloading a package many times.

Running a script locally with some kind of cron job should do just fine - but that isn't too exciting... let's use serverless!

You can check out the full repo here.

For the Lambda, I created a function which takes the following arguments:

The latter argument is intended to add noise - simulating the variable nature of downloads over time.

A "coin flip" takes place each run, with the probability argument being used to weight the chance of success. If the flip is successful, the package is downloaded.

To get this script running routinely, a CloudWatch event was set up that triggers at a rate of once a minute.

In order to do something when this event is triggered, an event target is set up, pointing to the Lambda with our required arguments.

After deploying this for the duration of a week, the result is... well actually not that impressive; it turns out there aren't as many seconds in a week as I had expected 🤔.

But alas, after some tweaks, we hit just under 1 million downloads per week! 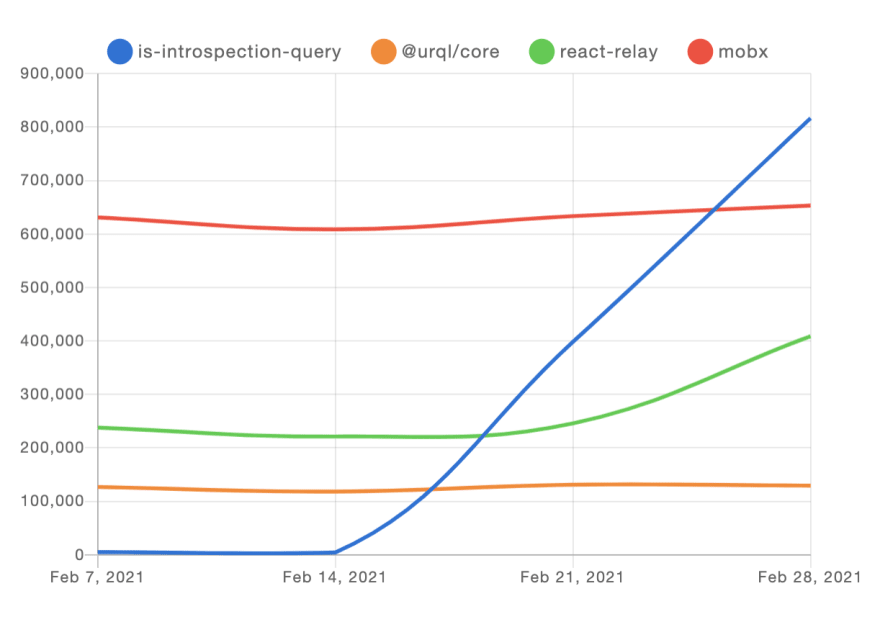 Yes thats right, a package with literally 0 users has more downloads than the likes of urql and mobx.

Are you seeing the problem now?

Here's the thing, naive download statistics are useless at best and misleading at worst.

The large graph on NPM's site, the culture of celebrating download counts online, the third party sites which show package download "trends". These all contribute to this narrative that NPM download counts provide some kind of insight into a packages popularity, and they just don't.

Even ignoring the potential for malicious actors (like myself) the abundance of registries and caching implementations make these statistics less than useful.

Fortunately, NPM has a saving grace - the popularity statistic! Let's just replace the download count with some of the more useful statistics... right?

Well no - turns out the popularity statistic seems to be the downloads statistic in disguise. As you can see below, my package managed to surpass @prisma/engines in terms of popularity.

Here's a quick comparison of the two packages side-by-side.

If there's one thing you take away from this discussion, it's that downloads alone aren't a useful metric.

While I've no doubt that NPM could create a popularity metric that aggregates a number of different attributes of a package (npms.io has already done it), from now on, I'm going to do a little more background research before trusting the downloads and popularity metrics on NPM 🕵️.

Hopefully, you found this interesting! If you have any thoughts or comments, feel free to drop them below or hit me up on twitter - @andyrichardsonn

Disclaimer: All thoughts and opinions expressed in this article are my own.