Learn everything about the fetch metadata headers and how you can implement isolation policies to defend against various client-side attacks. You can read the original article here.

What are fetch metadata headers?

Fetch metadata headers are a relatively new browser security feature that you can use in your web application to protect against client-side attacks like never before.

The purpose of the headers is simple. They tell the web server about the context in which an HTTP request happened. 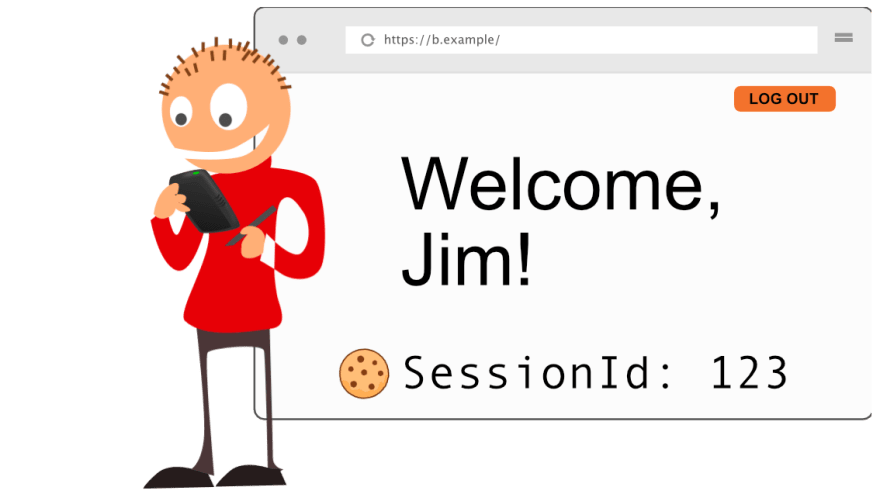 Say that there's a website a.example that loads an image from b.example. 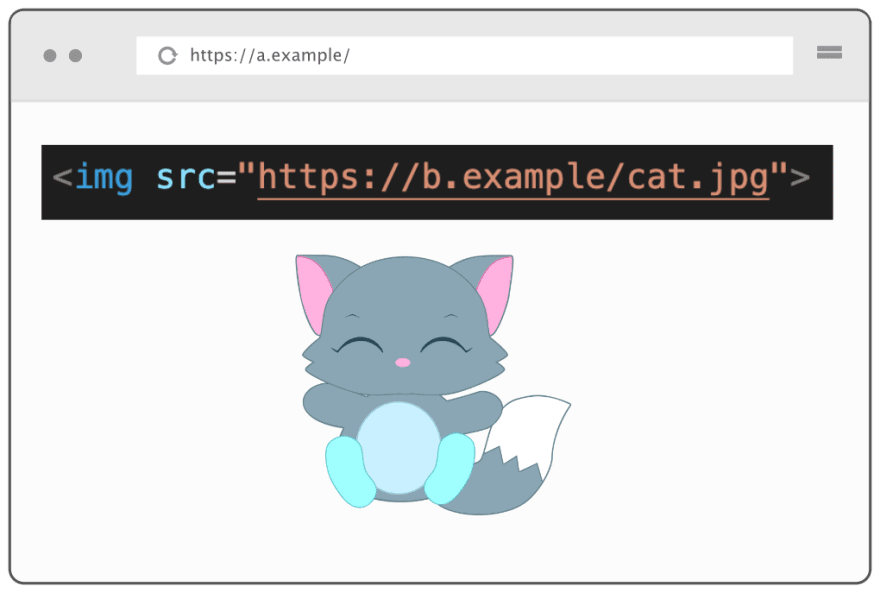 Before the fetch metadata headers existed, all the webserver saw when Jim opened a.example was that someone with Jim's cookie loaded the image.

Note that the server has no way to know whether it's a.example or b.example loading the image with Jim's session ID.

With fetch metadata headers supported, the browser will send more information in the request to the webserver. 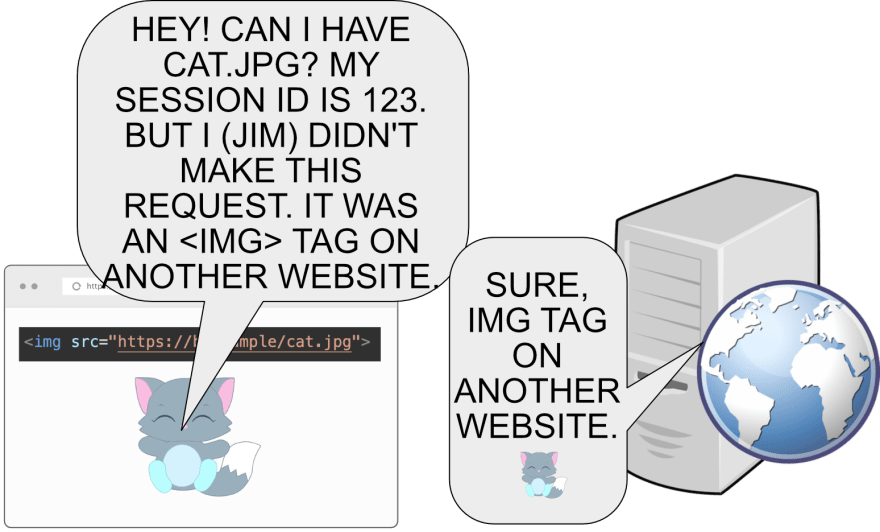 Notice how the browser told the webserver three new things this time:

Actually there is a fourth thing implied in the request as well. The lack of Sec-Fetch-User header implies that the request didn't originate as a result of user interaction.

Fetch metadata headers can help prevent pretty much any cross-site attack. These include:

The Sec-Fetch-Site header tells the webserver if the request originated from the same origin, the same site, or a different website entirely. It can have one of the following values:

The Sec-Fetch-Mode tells the webserver the request's mode. It can have one of the following values:

The Sec-Fetch-Dest tells the webserver the request's destination, that is, what kind of place is waiting for the resource. In the example above, it was an <img> element loading the resource, so the destination was image.

Some of the possible values are:

The Sec-Fetch-User header tells the webserver a navigation request originated (in theory) due to user interaction, such as by clicking a link. The value is always ?1. When navigation occurs as a result of something that browsers don't consider "user activation", this header is not sent at all.

At the time of this writing, fetch metadata headers are supported on Chrome, Edge, and Opera. But don't worry, you can implement a policy in a fully backward-compatible way. You can check the up-to-date status here.

The reason fetch metadata headers are so fantastic is that they allow us to do this. 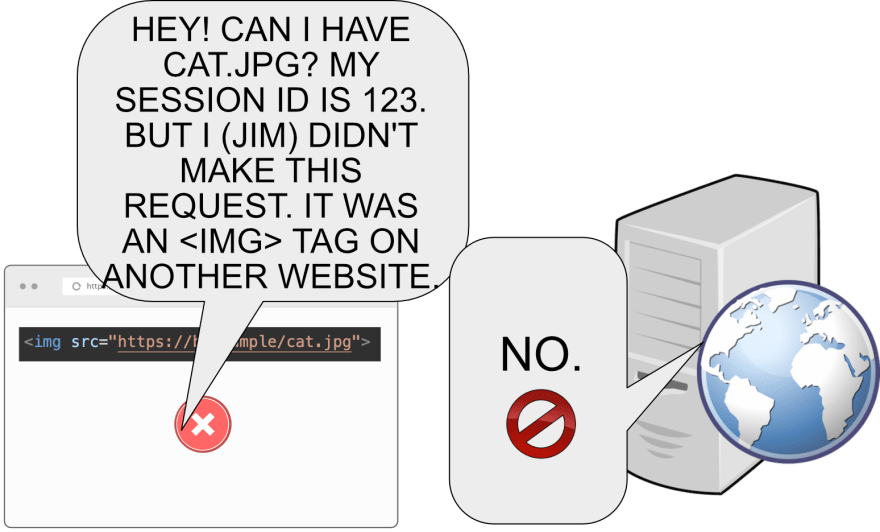 Blocking a request on the server-side based on the client-side context is a power that we've never had before. But now we do, so let's use it and implement an isolation policy.

To create an isolation policy, you need a filter, middleware, etc., that enables you to block requests based on the HTTP request headers.

I will use NodeJS as an example, but such middleware is usually trivial to implement in any development framework.

We'll start with this skeleton:

2. Allow all requests from the same origin

To make your application work properly, allow all interactions from the same origin.

Sometimes requests originate from the user opening a bookmark or typing in the URL bar. In these cases, the value of Sec-Fetch-Site is none, so let's allow that.

To enable other websites to link to your page, navigation has to be allowed. However, just allowing navigation would also allow cross-site POST requests, framing, and other things we don't necessarily want.

To be safe, verify that the HTTP method is GET and that the resource destination is document.

5. Block any other requests

If a request didn't match any rules so far, reject it.

You may want to allow some cross-origin or cross-site interactions.

To allow requests from your own subdomains, let requests through that have the Sec-Fetch-Site value of same-site.

To enable other websites to load your page in an iframe, allow navigating GET requests when the destination is iframe.

We have now implemented a rather strict isolation policy. Here is the entire thing (I didn't allow iframes or subdomains in my example). You can fork and play with the code here.

I've created a little test page here. It tries to load an image, POST an HTML form and frame the protected website. If you open the site, you will find that all of the three will fail. 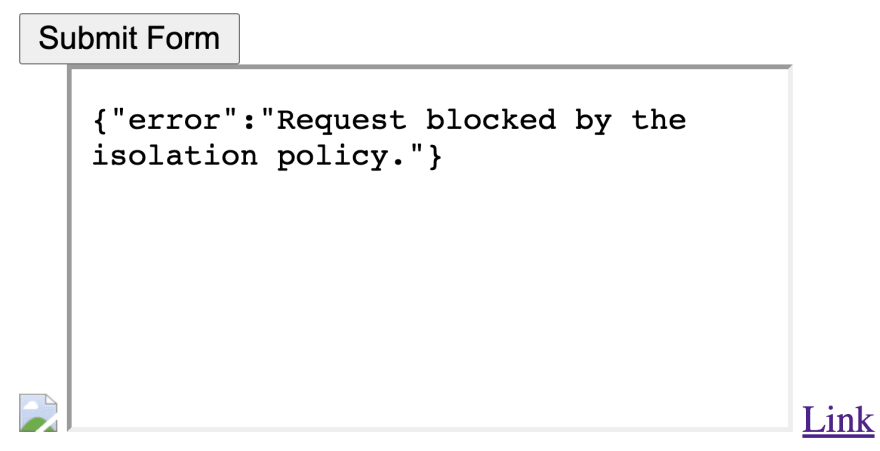 There is also a link. Clicking through the link, the page loads correctly.

Also, loading the page in Firefox or Safari works fine, so our backward compatibility seems to be in check.

When deploying the policy to production for the first time, it is recommended to use a logging-only approach.

The policy would remain the same, but instead of blocking requests, you log that a request would have been blocked because of X, and then you let the request through.

This way, you will quickly know if the policy would break something and if there's something you have to add before finally deploying the enforcing policy.

Fetch metadata headers are a remarkable browser feature that enables developers to secure web applications in a way that hasn't previously been possible.

Implementing an effective policy is simple, and it can easily be relaxed to accommodate any special needs, such as allowing framing or interactions from subdomains.

When deploying the policy to production, it is recommended to start with a logging-only approach. Then later deploy the enforcing policy when you're satisfied that it won't break anything.

Browser support is still lacking or experimental depending on the browser, but the headers can already be used in a backward compatible way.

Get the web security checklist spreadsheet!

☝️ Subscribe to AppSec Monkey's email list, get our best content delivered straight to your inbox, and get our 2021 Web Application Security Checklist Spreadsheet for FREE as a welcome gift!

If you like this article, check out the other application security guides we have on AppSec Monkey as well.

Once suspended, appsecmonkey will not be able to comment or publish posts until their suspension is removed.

Once unsuspended, appsecmonkey will be able to comment and publish posts again.

Once unpublished, all posts by appsecmonkey will become hidden and only accessible to themselves.

If appsecmonkey is not suspended, they can still re-publish their posts from their dashboard.

Once unpublished, this post will become invisible to the public and only accessible to Teo Selenius.

Thanks for keeping DEV Community safe. Here is what you can do to flag appsecmonkey:

Unflagging appsecmonkey will restore default visibility to their posts.