2018 was a really big year for me, it's so weird to think that I had just started writing and speaking a year ago. It's been a whirlwind for sure! I tried a lot this year, some things worked and some didn't, and I wanted to reflect on it before moving forward into 2019!

A year and a half ago, I started teaching people to code at General Assembly's Web Development Immersive program as a lead instructor. In 2018, I taught two traditional on campus programs, and then was promoted to work for their enterprise program. That program brings GA's learning programs to companies in order to teach their employees new skills.

In May, I moved to Hartford, Connecticut to teach at an insurance company there -- they were offering the opportunity for some of their long-term non-tech employees to learn how to code and move over to developer positions. It was really cool to be a part of such a different program, and the students were super inspiring and different from the students I had taught before.

Then, at the end of the summer, I moved back to DC in order to teach in Northern Virginia for Capital One. They have a program for recent college graduates who wanted to become software engineers. It was also awesome to teach in that environment, and working on site at these large institutions gave me a really different perspective as someone whose worked at smaller, newer companies.

I loved being a part of all of these programs and seeing all the hard work that my students put into their work. It's also been awesome to see their successes after their cohorts.

I was also a big part of developing new curriculum, both so that the DC campus could move from teaching Ruby to Python and so that we could teach the fundamentals in more detail for programs that needed that.

In addition to teaching the fulltime program, I also did a lot of one off classes and workshops for GA -- mostly "Intro to Code" and "Code in One Day" programs that teach fundamental HTML, CSS, and JavaScript to people who have never written code before. I had a ton of fun with teaching these -- seeing people light up when they see how websites are built for the first time is so cool.

I also did volunteer teaching for Django Girls and Hear Me Code community groups, which was so rewarding and an incredible experience.

In addition to more traditional teaching formats, I also spoke at a couple conferences and meetups last year. To do a quick rundown:

Unfortunately, I had to turn down way more than I could accept because my fulltime job didn't allow much time off for travel, and I was living in a non-tech city for a big chunk of the year then had a gnarly commute for another large chunk of it. One of my biggest goals for next year is to speak at more events, and especially do more workshops at conferences. I love the more interactive format, and I feel like I can do my best work in that setting.

Even though writing production code wasn't my fulltime job this year, I still tried to write code pretty much every day.

My biggest project was Learn Code from Us which is a site that highlights tech content creators who are members of underrepresented groups in tech. It was the first time I opened up one of my projects to contributors, which was also really cool to try out. I think the codebase is in a pretty good spot, and I would love to feature more people on there. There are some open issues if you want to contribute!

I also wrote the code for my blog's site using Gatsby.js and Netlify for hosting -- I had a lot of fun with the stack, and I added a lot of cool features pretty easily with it.

On top of that, I wrote a lot of code that went into blog posts -- I started the year still working on my "On Learning New Things" project, in which I learned a new technology each week, wrote some code with it, and then blogged about it. I also wrote about writing a Sudoku Solver and my Beginner's Guide to React which was pretty code-heavy.

For the past few years, I've solved a code challenge first thing pretty much every day to wake myself up and get my brain working. This year, I started doing that in public on Twitter, and tried it out on dev.to as well. It's honestly one of my favorite things I do, and I'm definitely going to keep it up next year. I did take a break after the first 14 days of Advent of Code due to travel and the problems taking a while, but I will definitely start solving them again every day once I get back in a normal routine!

The thing that stands out the most to me as to what I accomplished this year was my writing. Again, I started the year still working on my On Learning New Things project, but it was too much and between work, my social life, and doing speaking gigs I couldn't keep up. When I moved to Connecticut, I barely knew anybody and I didn't have a ton going on outside of work. So, I decided to start blogging again. I had this concept for a hybrid lifestyle and code blog, and so I spun up a site and started writing right after my 24th birthday in July. My idea was to write posts that would have been really helpful to the previous me -- the college student who didn't think I could be a programmer. The posts blew up in a way that I couldn't have imagined beforehand.

A couple cool things that happened: I hit #1 on HackerNews with my portfolio advice, I got to the front page of /r/programming with my tips for new developers, and I got on the front page of HackerNews (again) with my design tips for developers. I think those things stand out to me mainly because those sites are so far outside of who I thought my target audience was, and it was really cool to see my content do well there despite getting some negativity along with the success. I also had my posts get to the Top 7 quite a few times on dev.to, and my writing got shared by a lot of people I really admire on social media as well.

I crossposted most of my blog posts, which led to quite a few readers. I would post to my own site, dev.to, and then would also post relevant content to FreeCodeCamp on Medium. Across those three sites, I got 566k views of my blog posts this year, I got the most on Dev.to, the second most on my own site, the third most was Medium.

I wrote 23 real posts this year, along with a couple discussion questions on Dev.to.

The posts I'm most proud of are:

This post really drew upon my teaching and self-teaching experience, and I really hope it helped some people just starting to code.

A Complete Beginner's Guide to React

This was my most time consuming post to write, and it did especially well on Medium. I like writing tutorials, and this is probably my most in-depth one to date.

The Most Important Non-Programming Skills for Programmers

I think this post allowed me to express a lot of the opinions that I normally share on Twitter about how important the skills outside of programming are in a longer format.

thank u, next: an introduction to linked lists

I really enjoyed writing with a humorous spin for the first time. Plus, it seemed to do well in a very different demographic than my normal audience which was really cool. Better representation in tech is something I'm passionate about, and I think that making learning resources that are entertaining and have non-stereotypical themes are constructive for that.

I recorded an episode of the FreeCodeCamp Podcast with Quincy Larsen, which was awesome. I also recorded another one that is coming out this week, so keep your eyes out for that! I really want to do more of these next year, and to get better at them!

I created a YouTube channel this year, though I haven't done much with it. I want to do more video content because I know a lot of people really learn well from them, I just haven't had the bandwidth to do the editing for videos! Maybe next year!

This year, Dominic Duffin reached out to me about co-hosting a Twitter chat about the intersection of art and technology -- I've had fun working on it and experimenting with it! We'll be starting back up in the new year!

I got involved in Meetup organization this year! I started the Art + Code Collective with my friend James. Unfortunately, I moved after the first meetup, but he hosted a couple after that. We plan on doing quarterly ones next year, with our first one coming up in January! At the very end of this year, I started as the tech director for Women Who Code DC and was asked to start a Vue Vixens chapter in DC. We have events for both of those coming up in early 2019 as well!

I started growing an email list in order to send out a newsletter with my favorite resources from the week as well as my own writing. I didn't love writing it to be honest (after a few months of trying), it felt kind of one sided instead of social, and I felt like I wasn't reaching enough people to make it worthwhile. Maybe I'll try a newsletter again in the future, maybe not!

This spring, I won an award for women coders in DC. It was really cool to be acknowledged by the community and I'm really grateful to have been nominated.

I normally don't share that much of my personal life online, but I also just got a puppy! I've been threading pictures on Twitter (and I'm polishing this post up while she naps)! 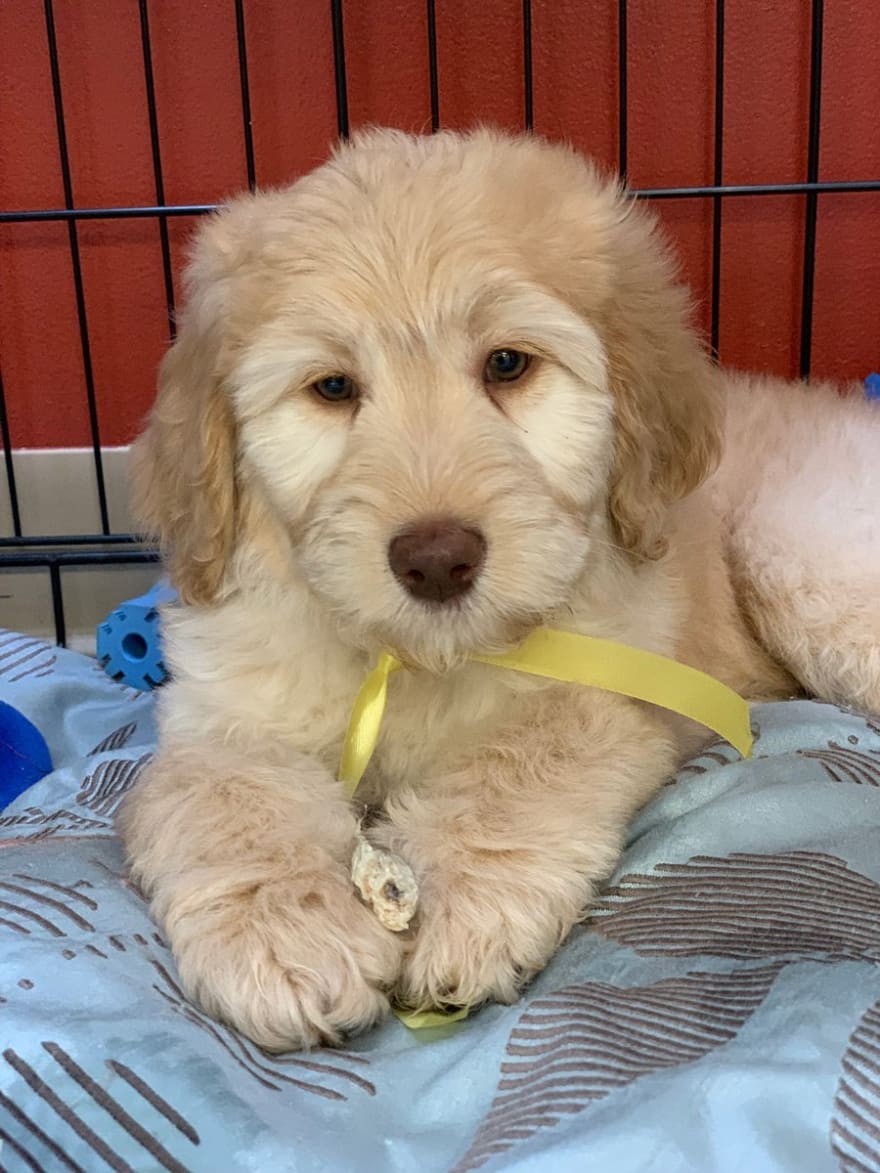 Looking back, it was a pretty eventful year! It's been really awesome to get more involved in the community and to learn about communicating effectively to audiences. I also like that I tried a lot and didn't get too down on myself or force myself to do something if I wasn't loving it -- especially since all of the additional work I did wasn't for my day job, so I was working pretty long hours. I don't feel like I was working absurdly hard or anything like that, I still had a ton of time to hang out with my friends a few times a week and take some vacations to NYC, Mexico, Charleston, and LA. Overall, 2018 was a big year for me and I think 2019 will be as well!

🌖🌗🌘 Turn on dark mode in your DEV Settings