This is tutorial 1 of a 5-part tutorial, but each tutorial can be read in isolation to learn various aspects Node+Express+TypeScript+Vue API/Vue web app set up.

At the end of this 5-part tutorial, you will learn to build an app like this:

Looking to learn mobile/desktop apps? The skills and concepts here are fundamental and re-usable for mobile apps (NativeScript) or desktop apps (Electron). I may cover them as a follow-on.

Navigation to other parts (you are at part 1)

All good apps should start from a rock-solid base, which is what this tutorial about, illustrated through building a very simple photo sharing app, instead of a Todo (which really doesn't show much). Through these tutorials, you will learn TypeScript, Node, Express and VueJS, using versions as bleeding edge as it can get at the time of this post (some pre-releases where practicable).

*Sadly, Deno was considered but is still too early and to use. However, when the time comes, you are likely able to switch to Deno and reuse much of your API codebase if you generally follow best practices in this tutorial. You will be able to re-use all your view coding as it is not coupled to the API.

To be completely honest, Instagram can't be built in a single tutorial, so admittedly the title of this post is an exaggeration. We will call this project "Basicgram".

You can start building by cloning and checking out tutorial-part1 branch:

I opted for Handlebars (hbs) as the view engine because it looks like HTML so you won't need to learn new templating syntax. But you hardly will use since we will only be using Express for API service -- but it's there for you when you need it.

We will use the latest Express 5.0 (pre-release) and update all module versions, so edit the package.json file:

Fire it up and see if it all works

Go to localhost:3000 and express should greet you. 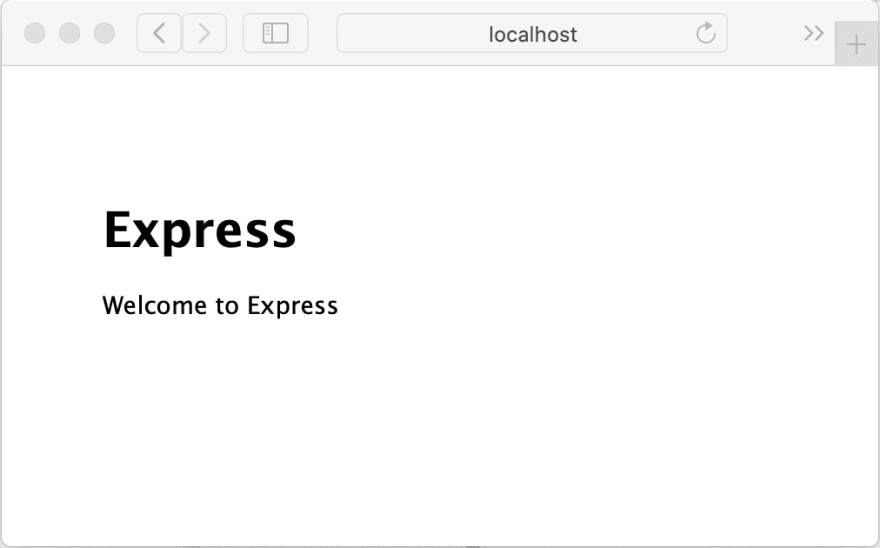 One of the first Express things you want to get is express-routemagic, which automatically require all our routes instead of declaring them file by file (you will see huge Express apps and their tower of routing codes which doesn't make sense). So just get routemagic, problem solved.

We will replace the routing requires:

That's it, you will never need to worry about routings. Let's move on.

TypeScript provides quite a lot of useful features to build better code. You can google its benefits. It has its downsides too, especially being more tedious and having to deal with non-typescript packages (there are many useful and time-proven ones, but didn't see the need to port themselves over to TypeScript syntax). Throughout this tutorial, figuring how to convert some JS syntax to TypeScript were either painful or close to impossible. But well, we soldier on.

Since now we need to compile our TS to JS for Node runtime, we will need a few steps to get there.

1. Pack your Express into a "src" folder like this: 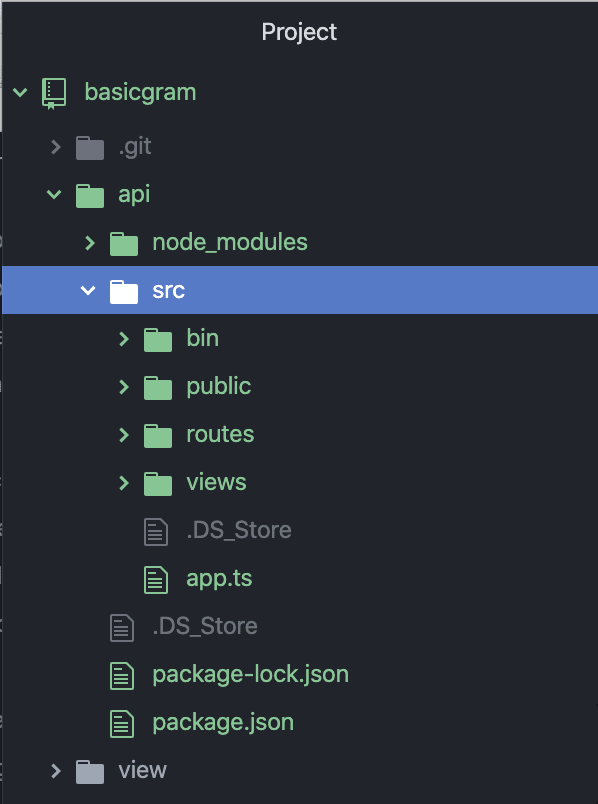 And also notice that "app.js" is renamed to "app.ts". We will start with this and leave the rest alone for now. Baby steps.

Tip: I think it is OK to have mixed codebase. Not everything needs to be in TypeScript, plus you will be missing out a lot of really good JS modules. But I'm sure this statement invokes agitation amongst TypeScriptors. Oh well, make your case below.

Install TypeScript (note: all npm commands are to run in the basicgram/api folder. api and view are technically two different apps. If you run npm in basicgram, you will mixed their node_modules and other configurations up.)

Setting up the TypeScript compiler

Set up the tsc command in package.json:

And initialise tsc which will generate a configuration file:

tsconfig.json will now appear in basicgram/api. This controls the compiler's behaviour. There's generally 2 default behaviours we want to change:

So we make the following changes:

Now let's try out our command:

That's mean TypeScript works, and it's telling you app.ts -- which is still in Javascript -- has type safety violations, rightfully so. And so we start the conversion.

First, we need to install type declaration for all modules. Just go with me first, I'll explain what this is all about later. They are named "@types/[modulename]". Whether they are available depends on if the package owner has made it. A lot of them didn't really bothered. In any case, we are only going to do it for node and express as an example, while skipping over type-checking for other modules using // @ts-ignore.

And convert the app.ts into this:

(Note: Use of @ts-ignore is not recommended, and only for the purposes of this demo.)

What is app.use? It is Express's way of using "middleware" (functions that will run and be given the HTTP request to "read" and do something to it). And it is sequential, and one way is to imagine a HTTP request "falling" through your middlewares: In this case it will first pass through logger('dev'), which logs the request on your terminal, then express.json() which parses the request into json... and so on so forth sequentially.

The @types/express module you have installed are TypeScript declarations for Express objects. Declarations are like a dictionary -- it explains what something is or isn't.

If you refer lower down in app.ts, the block of // error handler code shows how this "dictionary" is applied to function arguments:

What it means is that, the req argument are "of the same type and -- for a lack of better word -- form" with Express' Request object/prototype (I refuse to use the word "class", because Javascript is irrefutably classless).

So within the function, if you try to use Request as a type that it isn't, or if you try to invoke a method that Request does not have, TypeScript will bitch about it.

All that, is in essence a very basic explanation of how TypeScript type-checks your code.

And now if you run npm run tsc again, you should get no errors.

TSC will only compile .ts files, rightfully so. But you need to copy the rest of the files over, including those .js files that you either don't intend to convert, or will convert later (that's the beauty, you don't need to always OCD everything to TypeScript -- not all code is worth your time). tsc doesn't seem to provide a good way (see issue here), so we will use the cpy-cli and del-cli modules:

Set up the npm scripts in package.json.

And your scripts in package.json will be:

Now, just to check everything is working, go to "src/routes/index.js" and change title from Express to Express in TypeScript:

Build and run it: 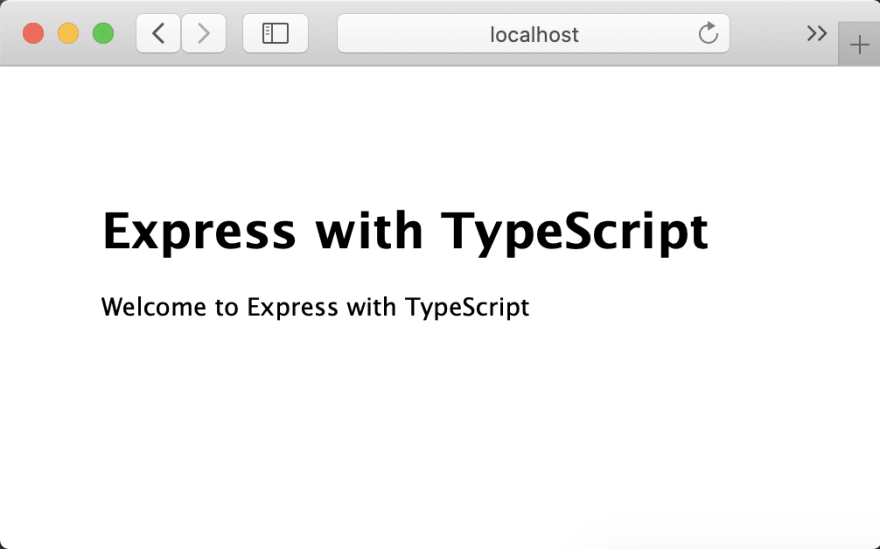 For development, it's inefficient to keep running npm build and npm start. So we are going to use nodemon to auto restart the server on file changes, and ts-node to execute the TypeScript files as though they are Javascript (note: this is intended for development environment and does not output to ./dist):

Add the following to package.json:

--exec: We use --exec flag because nodemon will not use ts-node, instead will use node if the entry file is not ".ts". In this case www is not.
--ext: When --exec is used, we also need to use --ext to manually specify the files to watch for changes.
--watch: This defines which folder nodemon will watch for changes to do a restart.
(Credits to this video)

Your API is all fired up! Make some changes to see how nodemon auto re-compiles. See Part 2 to set up your view engine with VueJS in TypeScript.

Get Up And Running With The useEffect Hook.

How to Use SWR with React

calvintwr
Trying to see the merits that everything has.
The true prototypial nature beneath "JavaScript classes"
#javascript #typescript
4 "Bang For the Buck" Practices For Express API
#node #javascript
Database "Stuff" I Wished I Knew About For NodeJS - Part 2- Postgres
#node #mongodb #postgres

Once suspended, calvintwr will not be able to comment or publish posts until their suspension is removed.

Once unsuspended, calvintwr will be able to comment and publish posts again.

Once unpublished, all posts by calvintwr will become hidden and only accessible to themselves.

If calvintwr is not suspended, they can still re-publish their posts from their dashboard.