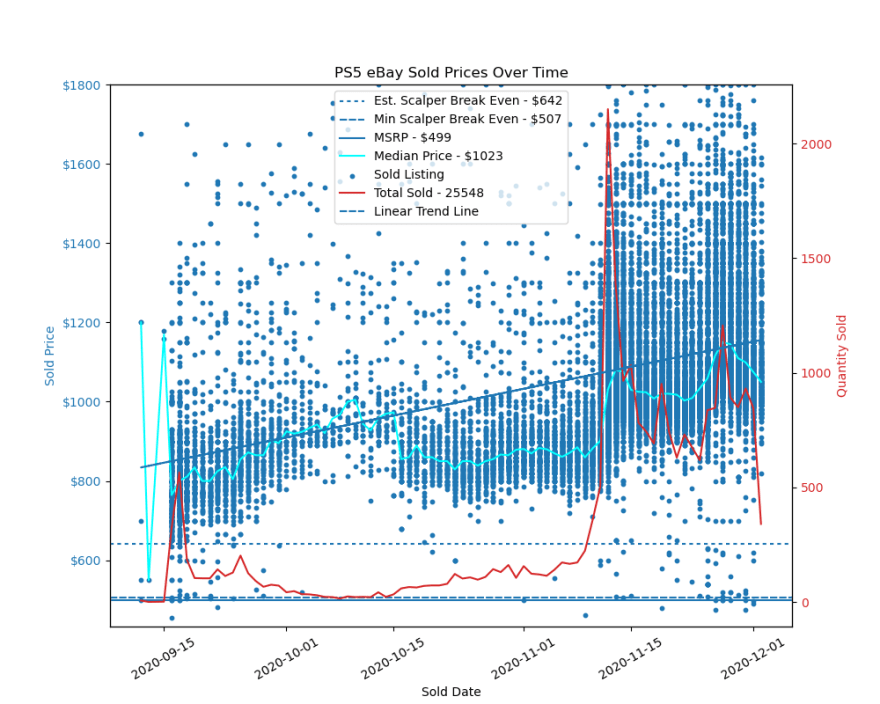 Similar to many others, I am eager to get my hands on some of the new tech that's come out, specifically the 5950X, 3080, and PS5, but scalpers seem to be ruining this for everyone. To get an idea of how bad it really is, I wrote a script to scrape all of eBay's sold listings for the products and graph them to get some trends.

Some definitions/assumptions for how I analyzed the data: 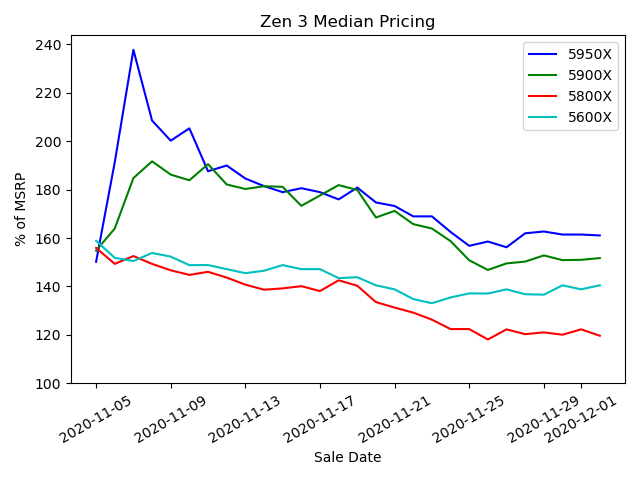 Zen 3 is the code name for AMD's new CPU architecture, representing the first time since 2005 AMD has had faster singlethread performance than Intel. Currently there are four CPUs on the market, the 6-core 5600X, the 8-core 5800X, the 12-core 5900X, and the 16-core 5950X. At their MSRP they are all faster than any of their peers and sell out instantly.

Zen 3 has the best pricing outlook out of all the product types investigated. All of the CPUs are on a downward pricing trend, with the 5800X recently below the break-even point for casual scalpers. Likely the casual scalpers will stop buying new 5800Xs soon and try to sell off their stock. Eventually as AMD's keeps making new chips, the 5800X pricing will but a ceiling on the 5600X, a high ceiling, but a ceiling nonetheless and drive its prices down. Scalpers clearly did not anticipate demand for the 5950X and 5900X, initially pricing the chips 50% below what they could be sold for and quickly corrected in a couple days. The 5950X and 5900X are still well above 50% of their MSRP, and based on trends I would not expect them to be down to MSRP before mid-January. 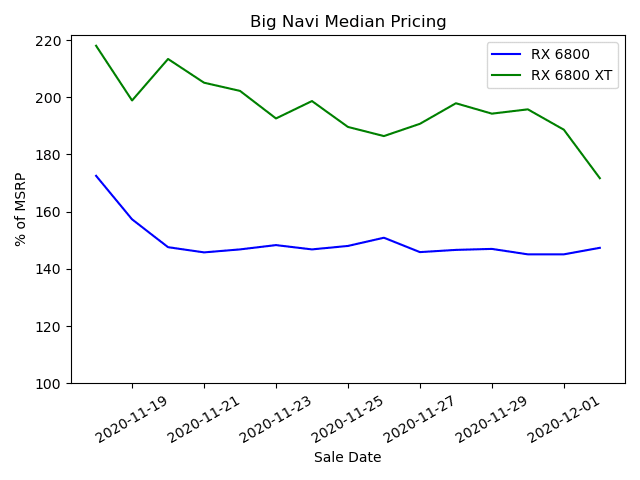 Big Navi (RDNA 2) is AMD's new graphics card microarchitecture, with two cards out, the RX 6800 and RX 6800XT and the RX 6900 XT announced, but not releasing until December 8. Competitive with NVIDIA's new RTX 30 series graphics cards, they too sell out instantly.

Big Navi is comparatively worse than Zen 3; the 6800 XT is still going for 75% over MSRP and the base 6800 selling for 150% of MSRP since it launched. More recently the 6800 XT has seen a 10-20% drop in price which if it keeps up that trend will be more reasonably pressed by the end of the year, but I expect the trend will not hold. The 6800 shows no signs of having improved pricing, with a very flat pricing trend, potentially the release of the 3060 and sales of other RTX cards will drive its price down. 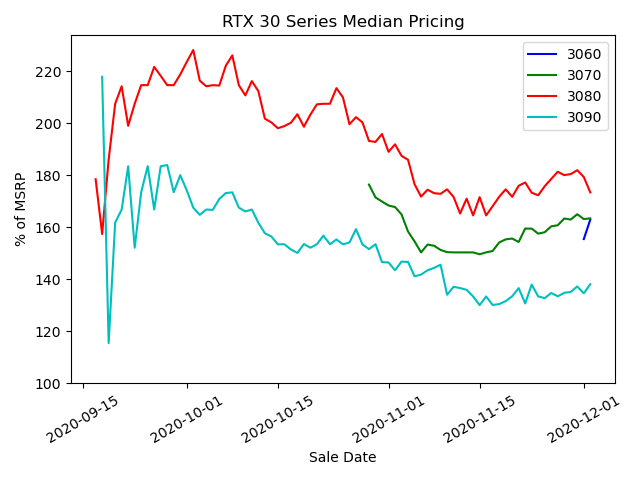 For as poor as Big Navi's pricing is, the RTX 30 series pricing is even worse. The 3060 launched on 12/1 and immediately started selling for >50% of its MSRP. Since 11/15 all four cards have seen their pricing trends progress upwards after decreasing since launch. It is possible anticipation of Black Friday/Cyber Monday drove down prices temporarily. Ironically the 3060 is 60% over MSRP, 3070 is 70% over MSRP, and 3080 is 80% over MSRP roughly, though the 3090 is "only" 40% over MSRP. The RTX 30 series are huge moneymakers for scalpers, with over $9 million dollars in profits just on eBay alone. 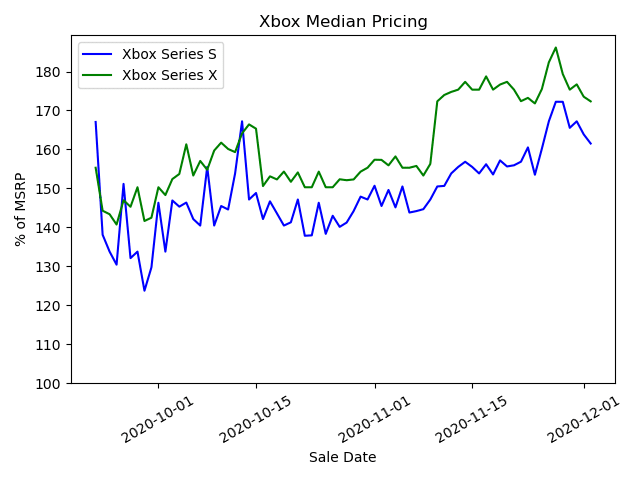 The Xbox Series S/X are Microsoft's new gaming consoles, with the Series S being slightly weaker than the Series X.

Moving to the gaming consoles, demand is far higher than the CPUs and GPUs, and pricing is trends reflect that. Before the Xbox was launched a cheaper time to "buy" an Xbox, with the launch of the Xboxes driving prices up 30% for the Series X and 15% for the Series S. The price hike seems to be abating somewhat in the past couple of weeks, though still over 50% MSRP. It is easily seen that the Series X is more popular, with over 3 times the number of sales as the Series S, and scalpers making over $9 million in profits from the Xboxes. 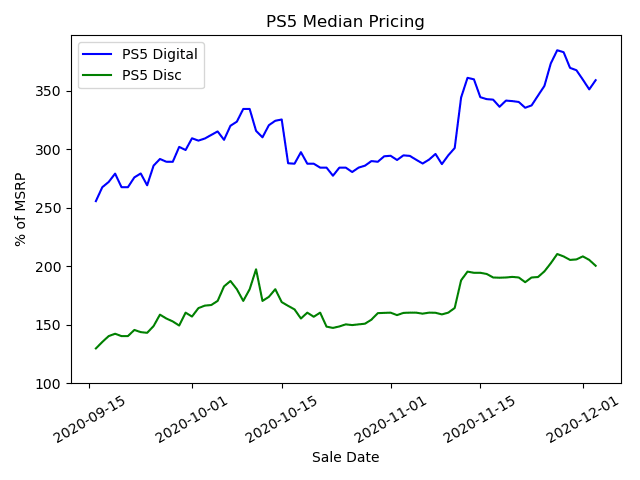 The PS5 Disc/Digital are Sony's new gaming consoles to compete with the Xbox Series S/X. The only difference between the PS5's is the Digital version has no disc drive and can only download games to play while the Disc can have a disc inserted to play.

But the worst pricing is reserved for the PS5. The Disc version is going for 300% MSRP, and the Digital for 200% MSRP! Over 32,000 PS5s have been sold on eBay, resulting in scalpers netting $19 million in profits. Again, as with the Xbox, it was cheaper to preorder on eBay, and when the consoles launched demand spiked up and has continued increase with a slight decrease in the past couple of weeks. Perhaps most interesting is the relationship between the PS5 and Xbox. The PS5 has sold ~13% more units, and the Disc version is 18% more expensive than the Series X. The PS5 Digital is twice as expensive as the Series S. It's hard to see why someone would buy a PS5 Digital vs. the Disc on eBay with the median price difference being $76.

In short, scalpers have made $82 million in sales, $39 million in profit since September on just these 14 products on eBay. But let's not forget eBay and PayPal, taking in $6.6 million and $2.4 million, respectively, in fees for providing the platform and payment options. With eBay's fairly high fees, I assume it's the place scalpers choose last as FB Marketplace, Craigslist, other forums/discords offer better profit margins, so this analysis can only be a proxy for the overall scalping market. I would conservatively guess the real scalping market is at least 2-5x larger (personally I think 10x+); it's clear how scalping is a very lucrative career option for someone of dubious morals. For Zen 3, there's some hope in sight by early next year; for the rest, until supply meets demand it's pretty bleak.

Also it looks like The Verge had a similar idea to mine, posted a couple of days after me, glad to see there's interest in this! The true price of a PlayStation 5

Part 1: An analysis of the $82 million eBay Scalping Market for Xbox, PS5, AMD, and NVIDIA
Part 2: An analysis of eBay tech scalpers
Part 3: Predicting future pricing (probably with XGBoost)
Part 4-?: A walkthrough of the code used in these analyses
Part TBD: A retrospective (once pricing has settled)

This website doesn't have an API, so I made my own, with extra features.

A Beginner's Guide to Numpy: Arrays