Variable fonts are a relatively new way of styling and displaying fonts on the web. This article will give you an overview of the technology, discussing pros and cons as well as use cases.

IMPORTANT: To try the demo below you need to use a modern and updated web browser!

What are Variable Fonts?

Variable fonts are a joint effort from Apple, Google, Microsoft, and Adobe to make it possible to derive an unlimited number of font variants from one single font file.

Because the initiative is being backed by large companies, the rate of adaptation and implementation in browsers has been relatively fast. 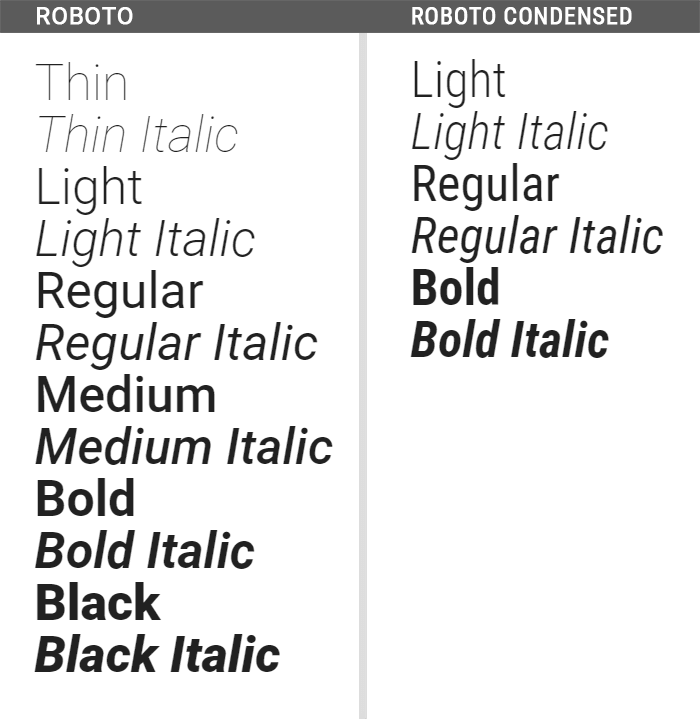 Variants of Roboto and Roboto Condensed

Each variant usually has its own name, like “Light” or “Bold”. These names describe the font variant but also determines, for example, the font’s width (a value between 1 and 999) and weight (a percentage value between 50 and 200). Using a normal font, the user only has access to each pre-defined variant.

Only having access to a couple of font variants instead of the full set is sometimes hindering or constricting web designers’ creativity.

Variable fonts contain information for all font variants in one single file. Instead of clamping a font variant’s values to those corresponding to certain weights (like the values for “Light” or “Bold”), a variable font allows the user to have access to all weight values (within the defined range for the specific font).

A variable font hence gives access to more font styles which in turn means broader design variety. It makes it easier to fine-tune and tweak the typography to fit each purpose and situation since designers are not constricted to specific predefined styles/variations.

Performance
Even if the variable font file would be quite large in terms of weight, it would be lighter compared to loading all separate font variant files (as in the previous example with Roboto and Roboto Condensed).

Using variable fonts will improve performance for websites that use a lot of different font variants. However, it is recommended to make sure the font file is as small as possible since the amount of data contained in the variable font file inevitably tend to make it rather heavy.

Performance improvements can also be had in the form of perceived performance. That means the webpage seems to load faster, for example, because all font variants in a variable font load at the same time. Hence, there will not be any sudden “jump” from when the browser renders a faux bold to when the real font variant has loaded.

Optical-sizing
Apart from performance improvements, variable fonts also can contain variations of the font that changes slightly to improve readability depending on font-size. The variable font file can be adjusted to render differently depending on viewing conditions, like the type of device, viewport size, orientation and other design constraints. This feature is called optical-sizing. At the moment of writing, this feature is only fully supported in the latest version of Firefox.

Custom Axes
A variable font can also have custom feature axes, that are up to the font designer to invent. For example, a custom axis could control how thick lines are in an outlined font.

Variable fonts are supported in the latest versions of the major browsers: Edge, Firefox, Chrome, Safari iOS, Safari, Android and Opera. Note that MacOS 10.13 or above is needed for some platforms.

At the moment, the feature is available in most modern browsers and is supported for approximately 78% of all users.

Where can I find Variable Fonts?

There are still not that many variable fonts around, but their number will probably increase as the technology is getting more and more widespread.

Pricing
Just like normal font families, variable fonts can be released under different licensing. Because variable fonts contain information for creating all imaginable variations of a font, the pricing will probably be similar to the price of a whole font family.

Ever wondered what happens when you type in a URL in an address bar in a browser?

Dark Mode 😎 in Chromium without any Extension 😎