We are in 2020, all IT companies are paying lip service to an abstract “need for diversity” in their marketing document. But as anyone who has been paying attention knows, there is a significant gap between the well meaning words and the grim reality on the field.

For example this job interview question from hell recently popped up in my feed:

Instead of rehashing what we should do but don’t do for... reasons, I have reached out to an old college friend. I find her developer journey inspiring, and hopefully it will be for you too.

Julie, can you first tell a bit about you? Who are you as a person and what makes you tick?

For as long as I remember, I was ticking (as you say) by solving logical games and finding out how things work. So I went from math and logical games to algorithm development, always triggered to find answers.

Thinking back, I was also ticking by another thing: helping others to understand technical stuff, especially my colleagues that didn´t understand things as fast as I did. Fast forward today, I raise my daughters and lead a team, so I get plenty of people interaction. Now, I really tick when I can bring a person or a team to reach something that seemed impossible to them.

You have 15 years of experience, you have lived in four different countries, speak fluently 5 languages and have a computer science degree from a top engineering school in France and from a top university in Germany.
But you don’t look like the “typical” software guy. Do you have any entertaining anecdotes when that was an issue? And how did you handle those situations?

By typical software guy, do you mean a young man, wearing a penguin T-Shirt and speaking a lot of languages like bash and brainfuck, showing up early - early after lunch -, working until the next day, eating pizza and drinking coffee in front of a dark-green computer screen?

Indeed, this pattern doesn't match me, as I prefer to eat vegetables, speak C++, German, French and Dutch, and come in before lunch. Luckily, we are all different. Recognizing and accepting this was key in my life. I value everyone for their strengths.

Joke aside, I actually never met such a typical software guy.

My most entertainment anecdotes are more related to being the only woman in a men's environnement, specially when dealing with people in manufacturing. When I started in a small company, a French speaking guy heard, a french woman will start. We met first at the coffee machine and our discussion was a bit off. After a while, I asked him what he thought that I was working on. He replied: "You are part of the administrative staff."

I answered very friendly that this was not 100% correct: I was in charge of writing the firmware for the new cameras. He was surprised and embarrassed. I was the first woman in the engineering department over there and took it with grace. He later always supported me in the kindest way with installing the cameras.

I also recall one day where I was putting my car on the last - and rather difficult - parking space near our office. Two guys from the manufacturing department were looking at me. Instead of avoiding them, I walked into their office, smiling proud of me, and asked friendly: "Hey, what do you think, did I manage that all right?" They could not ignore that they would never do that to a man colleague, and I could see it, so I just laughed with them. That actually helped me to make a connection with them and later they were some of my best supporters.

On being a parent and a leader

In the last 5+ years, you have assumed a position of team leader while at the same time raising two daughters - twins, which I find even more impressive. In my career I have seen male friends being more easily trusted with assuming that kind of responsibility after they became fathers. But for mothers it’s sadly unusual.
What’s your take on how parenting prepare someone for this kind of position, and why the asymmetry?

Parenting and managing a team have actually a number of principles in common.

When you get better at interacting with people, it serves you everywhere. I followed a course "communication with children " where I practiced some very good methods like active listening and positive speaking that I also use at work. At the end of the day, we all like to be listened to, understood and recognized.

In both cases you are responsible of everything, from food to activities, school and relationships, people and projects, customers and internal goals. You can (try to) do everything yourself, (and/or) be just as your parents or the previous (or another) manager, or you can choose your own path. Then you learn to organize, to choose your focus and priorities, to delegate and support. You have the choice to do things for others, or to teach them to do it by themselves. In both cases, you keep an overview, and make sure that everything is done.
Another common skill is, the ability to recognize, in the blink of an eye, when someone is just not as usual, for example as he runs into some issue. I got aware (and maybe trained that) on my children, but was several time very useful in my work.

A lot of young people like the idea that father and mother assume an equal share of the education of the children. In practice however, I more often see mothers being entirely or partially at home, and fathers just trying to earn as much as they can. That is just the pattern that we received from our parents, and the easiest to follow: we always did it that way. In the Netherlands however, a lot of fathers I met had a day in the week there they were not working or working partly from home. I think that it’s very valuable for their relation with the children.

What is or was your most difficult professional moment in relation with your mothership and your leadership position?

The most difficult moment is when I mention that I have children during an interview. You don't have to do it, and recruiters are not allowed to ask, but until now I have always mentioned it. I don't want to hide it and I introduce it saying that it strengthens my soft skills, which I see a huge point in a people management position. Sadly, after I mention that, I do observe a cool down in the discussions. What a pity.

Mothers don't fit in the cult of overwork

Alexey Stakhanov was the original XX° century rock star developer in Soviet Russia. He could mine Bitcoins 10x faster than anyone else 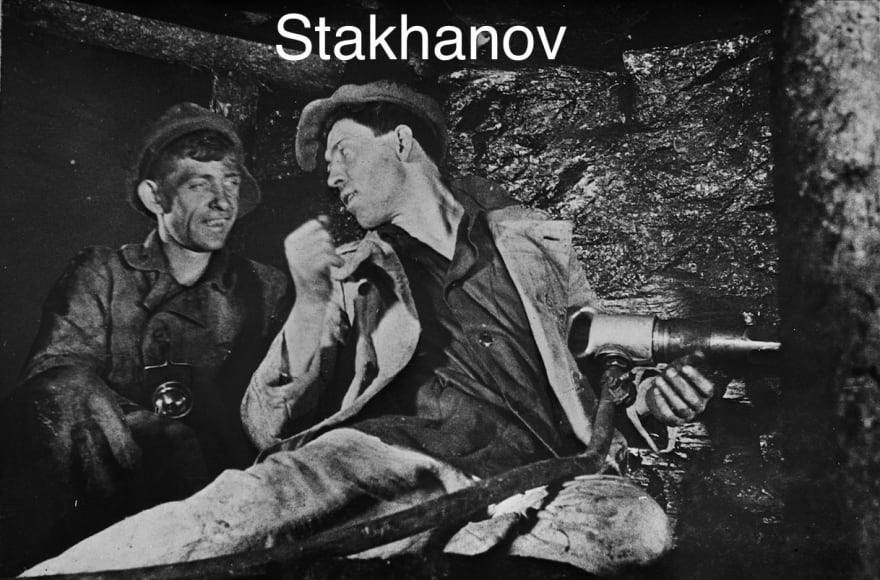 To play the devil advocate, isn’t it true that mothership is incompatible with a certain model of leadership? I guess that you don’t do a ton of overwork.

Indeed there is a XXth century model of leadership which is problematic. That model consisted in the best of the team becoming a manager, where he could have the privilege to work even more, opening the office in the morning and closing it in the night. He would also take decisions for everyone in the team, since he knew better.

But I sincerely think, that this kind of management will not last for long. On the one side, it isn’t very motivating to work in such a team. A friend asked me: “I don’t get why they bother to pay me so much if they are not interested in my advice once there are new problems to solve. Am I a human compiler only good to transform specifications in code?”.

For the managers themselves, it isn't great either. They don't have much time left to take care of themselves and be with their families… As a result, many of them become stressed out. That’s probably why some health insurances in Germany are more expensive for managers than for workers!

I think we should make more on enabling creativity… Make sure that we have a reasonable frame/structure in the way we work, where there is place for their skills. Make sure that they have anything they need. Listen to their desires. Train them to take good decisions by themselves, at the level where they are. Explain why. And trust. People will respect you, just as you respect them.

Do you have any tips for women who are just starting in this industry? What would have been helpful for younger Julie to know?

Be yourself. It’s not a gimmick: your difference is your strength. It is much easier to build on a strength you have and not your neighbour, than trying to catch up where he is better than you.
Validate others work, whatever their position is (including the ones, you don't want to do the work). People will respect you (and your work), just as you respect them (and their work).
Last but not least, you have to learn and improve for the rest of your live, so make sure that you enjoy it!

Where can people reach you?