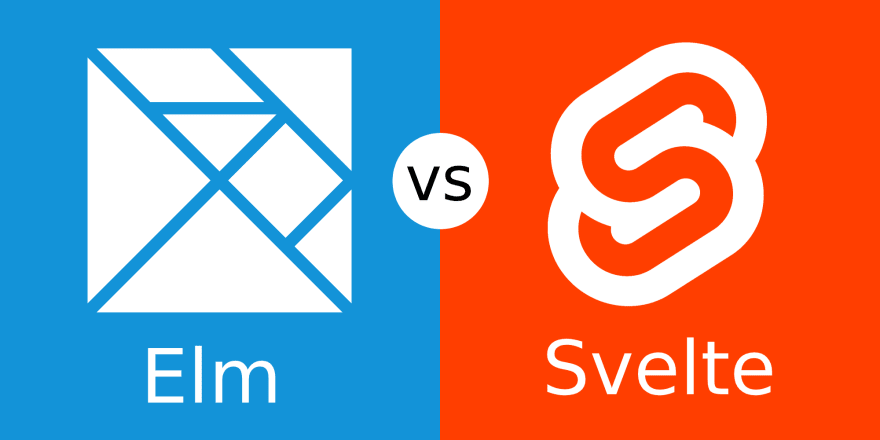 I had some fun writing this (probably inconclusive) post about Elm and Svelte. Rich Harris, in Write less code, showcase a small code snippet in Svelte as an example of getting something done writing a small amount of code.

I wrote the same thing in Elm and compared with Svelte using these criteria:

(*) I count characters removing all tabs/spaces, coping to the clipboard and then running pbpaste | wc -c

Wow! that is almost one order of magnitude bigger.

But wait, if Elm came out with 27 KB from 630 characters of code, I guess it adds extra things that will become handy later.

Let’s analyse the footprint of the Real World Example App (Elm and Svelte):

Yep, Elm increment is smaller than Svelte increment. Will these numbers ever switch? I mean, is there any application where Svelte build is larger than Elm build (without using code splitting)? This is an interesting question for which I have no answer.

If you want to see other cool "less-code" examples you can check the official list. I particularly liked the animation in the todo app.

Unless you crate pages with complex animation, video games or display a lot of data, performances are not an issue in modern hardware/browsers.

But for the cases mentioned above, the performances between Svelte and Elm are in the same class (here and here and here). Svelte interact with the DOM directly while Elm use a Virtual DOM that is optimised, leveraging its purity. You can find interesting conversations about these two approaches here and here.

Theoretically a perfect script that modify the DOM directly has the best performance possible. A system based on a virtual DOM need to do the same thing and, plus, it needs to manage the virtual DOM.

In reality generating a perfect script that could work on a plethora of situation is impossible so this is why in the case of Elm and Svelte, the performance are neck and neck.

This is a comparison of performances between Vanilla Javascript, Svelte, Imba, Elm, Vue, React and Angular. The greener, the better.

Elm comes with The Elm Architecture built in. This is an overkill but using Elm (or any other framework, for that matter) for this small app is an overkill anyway. The Elm solution is a skeleton ready to be expanded.

With Elm you are embracing a declarative pure functional language that has immutability, pattern matching, type inference, static types, etc. With its pros and cons.

If you are not familiar with the concept of pure functions, they are functions with “same input, same output” and no side effects.

All Elm functions are like this. That is part of what makes Elm reliable and easy to debug.

I guess Svelte could be written with something similar to The Elm Architecture (does Svelte has “on:input”?).

Comparing the two snippets, the Elm version seems having more boilerplate, Elm is leaning more on the “how to do” compared to the straightforward and succinct Svelte version that lean on the “what to do”.

I am all in favour of the declarative approach (“what” instead of “how”), but we need to maintain a good balance between the two, otherwise it becomes magical.

In this small example the two-way data binding is hiding some type coercion that could generate unexpected behaviours.

Dealing with input fields of type number is quite difficult. I had several issues before with them using Vue and React. Compared to them, Svelte does a very good job returning “undefined”. To understand this issue try to type “ee” or anything else that is not a number in a type field of type number. The browser will return an empty string. Svelte does some magic to cope with this issue that is hidden from the developer.

I guess the magic is in this function generated by the compiler:

The same issue is taken care in the Elm example just before printing the result into the screen, with this line of code:

For people not familiar with Elm this line does something like:

“I need the mathematical sum of two floating numbers that are stored as string (string is the natural output of the HTML input fields also when they are type number). So first I need to convert these two strings into numbers, but the conversions can fail. If any of the two conversions fail, I also want the sum operation to fail.”

The result of that line of code is a Maybe Float where Maybe is a representation in Elm for something that can fail. The two possible values of a Maybe Float type are Just Float (Yeah! Everything went well, here is your beautiful floating number) or Nothing (whoops, something bad happened, sorry, no number for you).

In case of no number, we print undefined on the screen, just to emulate the Svelte example because in reality undefined in Elm doesn’t exist. And neither null does.

Yes, bites, not bytes, as when the Javascript type system is biting you.

Still related to type, if you change the type of a and b to strings as in

The browser will render it as: “1 + 2 = 12” because “+” in Javascript works with everything, including string (it concatenates them). Svelte is doing some type conversion behind the scenes but in this case the function to_number didn’t run during the initialization.

This would not be the case in a strictly typed language. If you initialize a or b as string the compiler will complain because “+” only accepts numbers.

These issues may get fixed once Svelte will support Typescript.

As follow up note, while the Svelte version define a and b as type number, in Elm we defined them as strings:

I decided to use strings as this is what is naturally coming out of HTML. Then I convert them to floating point just before adding them.

If we want instead to store them as numbers, we would have rather used

To take into consideration possible failures during the string to number conversions.

Elm doesn’t have automatic two-way data binding. In this sense Elm is more similar to crude HTML. The Elm code is

That is the analogue in HTML of

The binding is made with onInput and value attributes, where "..." is something that calls the update function with the message ChangeA and the model, in pseudo code: update( [ "ChangeA", this.value ], model ).

The binding is made with the original bind: clause.

Again there are pros and cons about both approaches. The Elm way requires more wiring and allows you to modify the flow if necessary. The Svelte approach is simpler and is hiding the flow from you.

In Elm, by design, there is only one “thing” (the model) that can be modified during the life of the application. In this case we chose a record that contains the two values a and b.

In the Svelte example there are two values that are modified and they are the state at the component level. There are several ways to keep the state in Svelte: Stores, Context and Props. Stores, that are the way to hold the state outside of components, can be of type writable, readable, derived and custom.

In Elm, again, the state is only one at the application level. Nothing else can have an independent state.

Events All events in Elm are transformed into messages, In this simple example we used two messages:

Where InputField is a custom type or, to be even more generic (but not the best practice in Elm):

This is not a good practice because in Elm you want the compiler to be as strict as possible so that bugs are intercepted at compile time and not at execution time. Having String there doesn’t allow the compiler to give you an error if, for example, you pass a string that is neither a or b.

Both Elm and Svelte have compilers and both compile to Javascript.

Elm compiler generates a large Javascript file that is already bundled with the Elm runtime and ready to go. It has 3 modality: Normal, Debug (Turn on the time-travelling debugger) and Optimize (Turn on optimizations to make code smaller and faster).

Svelte compiler generates a small Javascript file that, in a second step, gets bundled with the Svelte runtime. You can find analysis of the compiled file here and here.

Svelte compiler has several modalities, the most significant are: Server Side Rendering, Development, CSS (To include CSS in the JavaScript and injected it at runtime), Hydratable, Immutable (Tells the compiler that you promise not to mutate any objects), Legacy (to work in IE9 and IE10).

A bit more about RealWorld example and performances

RealWord examples may be outdated or badly implemented so take these observations with a grain of salt.

I ran some simple tests on RealWorld examples but I was not able to notice any relevant difference. On slow network connection the Svelte version gives faster numbers (it also uses code splitting that is not available in Elm) but visually the Elm version render faster. The Svelte version shows the text “Loading…” for a long time, this could be caused by some implementation issues. In the Svelte version the browser is downloading 7 chunks of Javascript in 4 slots and the main part of the page is only downloaded after the fourth slots.

Elm on the left, Svelte on the right. Performances are similar:

Svelte — Assets are served as four slots for a total of seven chunks. While the fourth chunk is coming the page is still “Loading…”. An implementation issue? 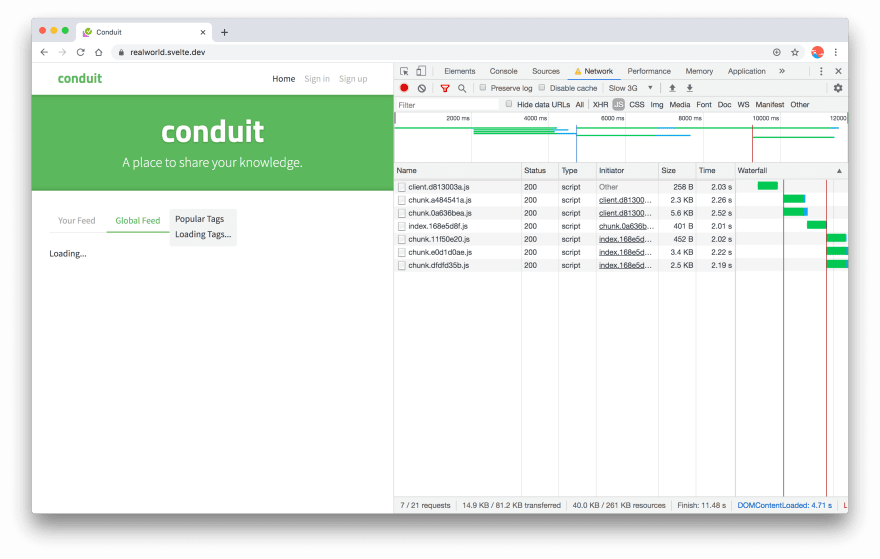 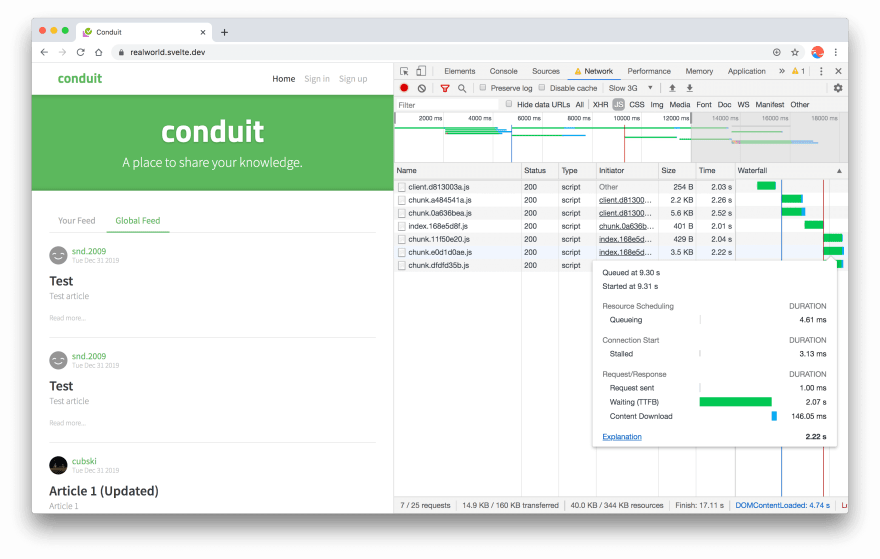 Elm —The first (and last) chunk 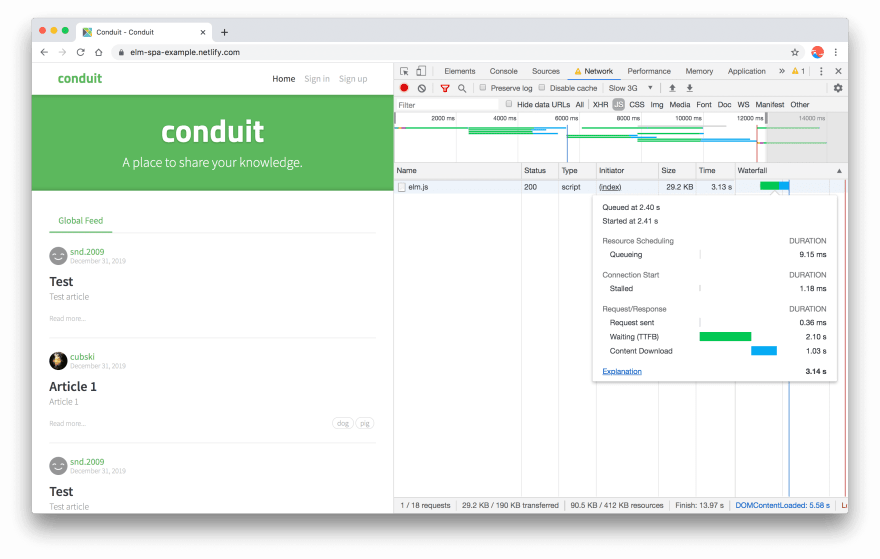 We just scratched the surface of these two technologies but can we declare a winner?

Yes, the winner is whoever chooses the right tool for the right task.

This post highlights probably one of the main objective tradeoffs between these two frameworks.

Svelte is keeping you close to HTML/CSS/Javascript while Elm and elm-ui let you depart from them in exchange for several benefits like, for example, no runtime exceptions.

Other concepts like the learning curve, gradual adoption, performances, footprint sizes are all open to debate.

I praise Svelte for bringing interesting new ideas to the front-end engineering world and I will keep experimenting with it. Contamination is a good thing and we should always learn (copy?) from each other.

In the meantime I will keep using Elm as I believe it is the best fit for the applications that I am building. I am also a happy user of elm-ui and the idea of writing CSS again is not appealing.

The whole concept of pure functional programming with strict types and type inference feels like an higher form of programming and it resonated with me.

My journey from being a cook to becoming a software engineer.

Once suspended, lucamug will not be able to comment or publish posts until their suspension is removed.

Once unsuspended, lucamug will be able to comment and publish posts again.

Once unpublished, all posts by lucamug will become hidden and only accessible to themselves.

If lucamug is not suspended, they can still re-publish their posts from their dashboard.

Once unpublished, this post will become invisible to the public and only accessible to lucamug.

Thanks for keeping DEV Community 👩‍💻👨‍💻 safe. Here is what you can do to flag lucamug:

Unflagging lucamug will restore default visibility to their posts.