For a long time, I wanted to do some meaningful contribution to the community but was never able to do so. This hackathon gave me the perfect way for doing that, by creating a way to monetize NPM packages!

And that's exactly what it is

I built a CLI ( for the first time! ) that allows you to run your app inside a container like environment, which it doesn't necessarily know about if it does not go looking around.

node index.js => monetize-npm-cli index.js and you're good to go!

It finds the package.json for your main project and then goes searching inside the node_modules folder. Any package.json it finds there with the key webMonetization is picked up to be monetized

Just adding this to package.json can allow packages to be monetized.

I wanted to keep the API as similar as possible to the one already existing for browsers, but some changes had to be made for the different environment.

document became globalThis along with the following changes

name and version are defined in package.json of each package.

Only the packages with webMonetization key in their package.json are accessible here.

Let identify them by listenerIdentifier.

If foo is not passed, all the listeners for that package are removed.

These methods can be used from wherever inside the application and the installed packages after checking whether globalThis.monetization exists, and can be used accordingly.

globalThis.monetization is itself a proxy of the actual object being used, to make it difficult to tamper with.

Remember the part where I said this CLI is modular? Well, that's because it can add and use many different providers easily with minimal changes!

That's where wrapper-coil-extension comes in

wrapper-coil-extension is a wrapper around Coil's Web Monetization browser extension that allows it to be used from node.js.

Since I needed a provider to work with the CLI I had created, and none of the current ones had an API to achieve that, I had to instead figure out a way to make use of the already existing ones, so I built a wrapper around Coil's Extension that allows me to do so.

Since the extension doesn't currently support monetizing more than one tab at once, Fixed in v0.0.7. Probabilistic revenue sharing is done where a package is selected randomly and monetized for 65 seconds each. This process is repeated until the app is closed.

Because Coil's Extension was not built for this kind of scenario, everything is working as expected now, more can be seen here

Pointer is now changed dynamically in the same tab, thus fixing this problem.

Due to the modular nature of monetize-npm-cli, as more and more providers come up and provide different ways to monetize, their modules can be easily integrated with monetize-npm-cli with minimal changes. You can see how to create such module here.

How is this better than npm fund

You may have this question in your head ever since you opened this post. Well, we all have seen the npm fund prompt pop while installing any package that supports it. What most of us haven't done is try to run this command and go the links that are provided, after which you have to perform further digging to find out how to pay and support the developer, which makes for a bad experience, one that can make a person willing to pay opt-out.

Well, this changes that. The number of steps reduces to just installing this package globally, logging in to your provider only once, and just running the app using it.

Some other good changes this can bring

Here comes the hard part. Throughout the process of building my submission, I was trying to figure out which category it falls into, and I still can't put it into one

You can follow along with this demo by simply typing

First of all, let's check whether the package is installed properly

Let's go to the help page 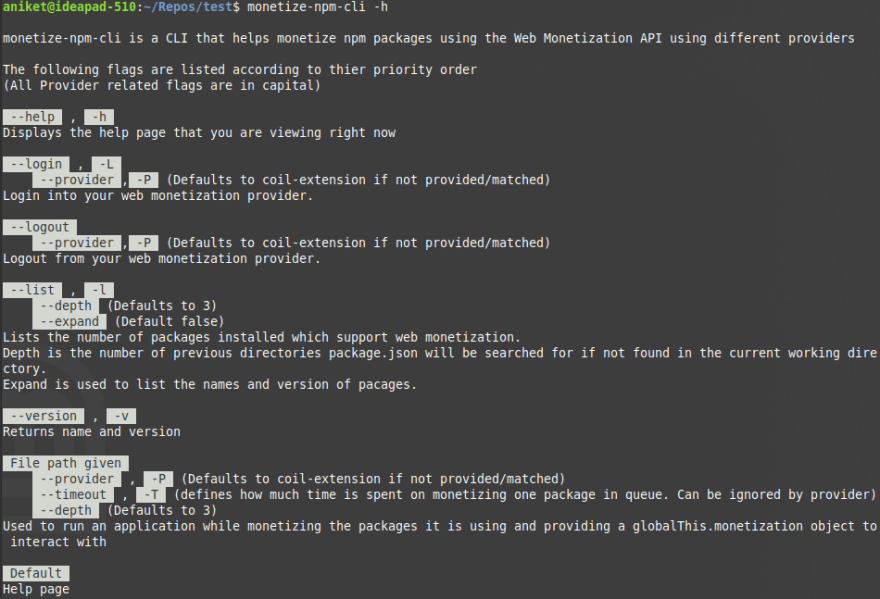 To monetize any package, we need to first login to our provider 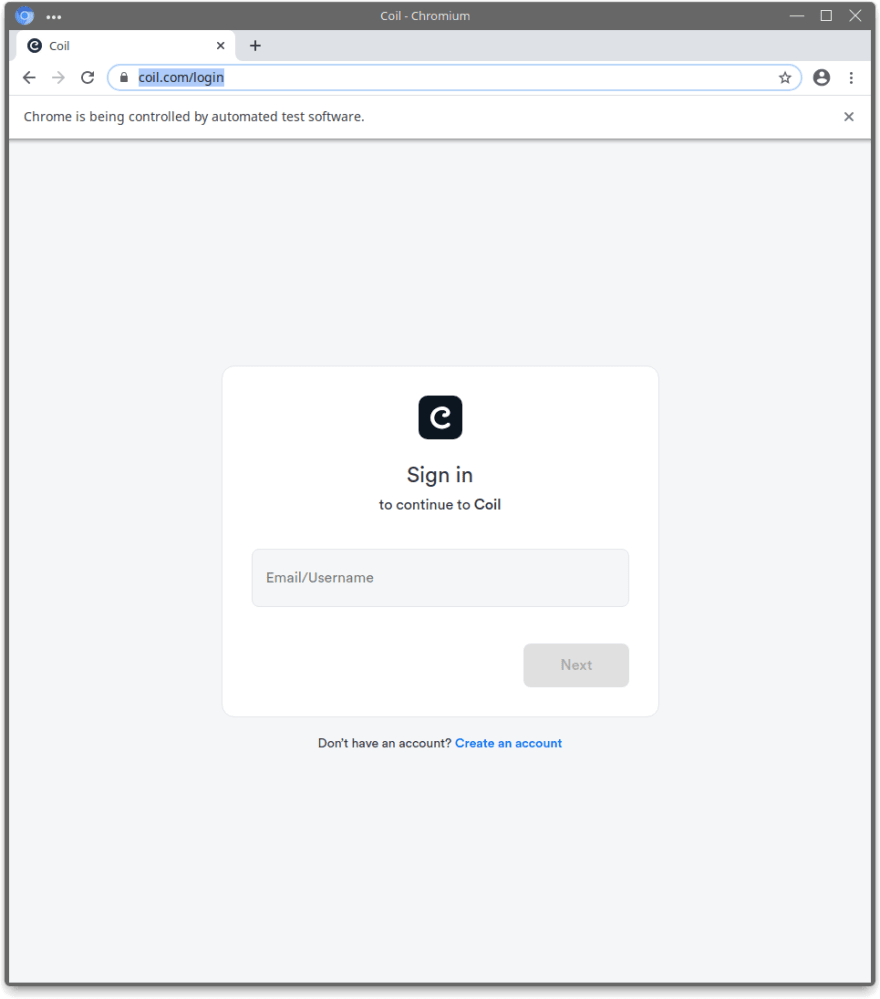 On successful login, we will see this on our terminal

For this demo, I have manually added webMonetization keys to various package.json of some npm packages. 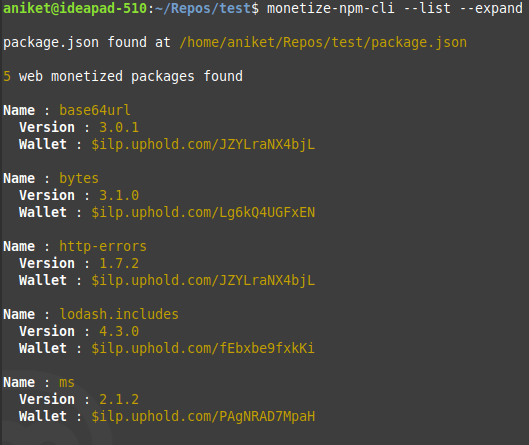 Let's add some access to globalThis.monetization from the app which is being run inside the container 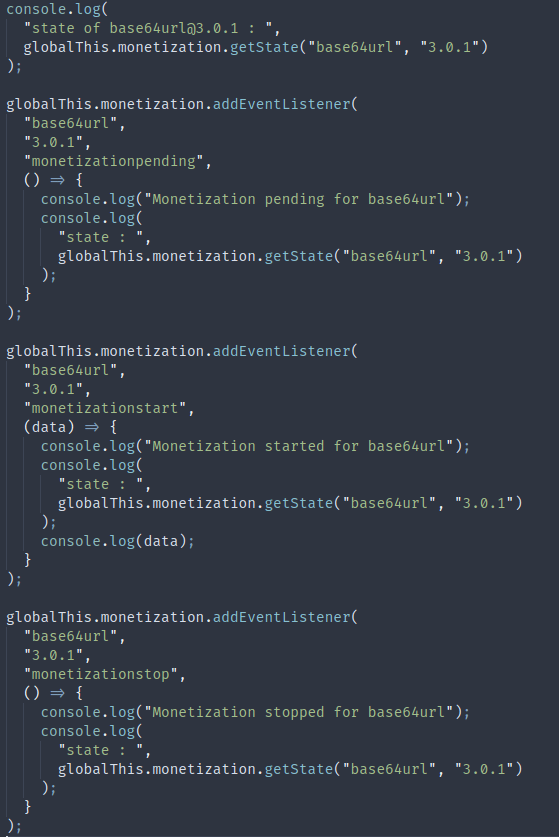 As soon as base64url starts getting paid 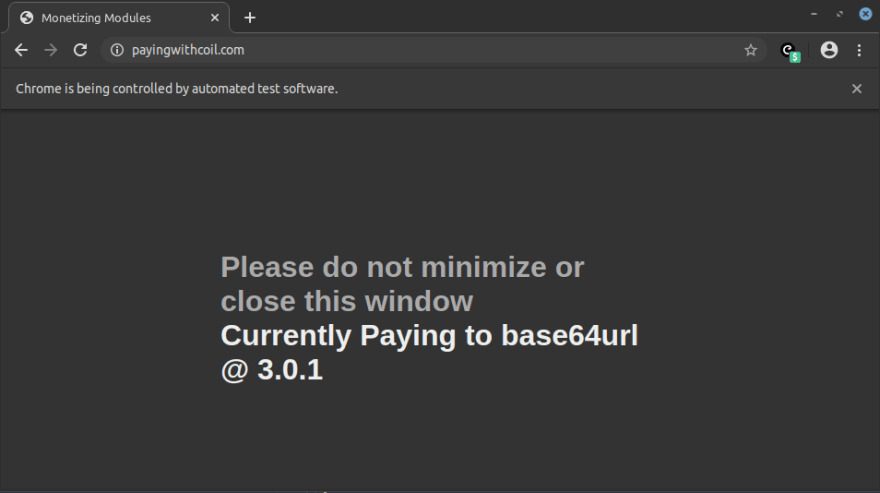 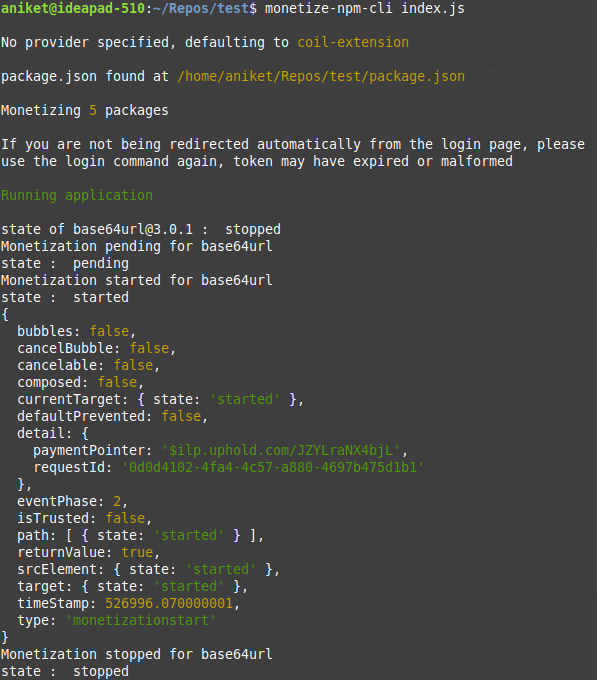 To run your app while monetizing the supported npm packages

To view help page with all details

Login to your Provider

To login to your web monetization provider

This will default to coil-extension if no provider is provided. See help for more details.

Logout from your Provider

To logout from your web monetization provider

This will default to coil-extension if no provider is provided. See help for more details.

Use help to get full list of supported commands

The aim of this CLI is to mimic the web monetization API given here as much as it could Instead of document.monetization, user…

A wrapper for Coil's web monetization extenion to make it run from node.js

wrapper-coil-extension is a wrapper around Coil's Web Monetization browser extension that allows it to be used from node.js.

Since v0.0.7, timeout is no longer used as instead of looping through packages, probablistic revenue sharing is being used.

This submission was a lot of fun to build. Building a CLI and automating websites was completely new for me

I parsed the arguments with minimist and used kleur for logs.

The hard part here was designing the monetization object, as I had to deal with listeners, packages and their states, all while keeping some of the stuff private for globalThis.monetization and the object being passed to the provider module. After a lot of researching, I learned a lot about JS objects and came up with this

This prevents tampering of the original object while exposing only the needed functionality.

Module providers are passed another proxy for the same purpose

This was tough. Initially, I tried to reverse engineer Coil's Extension by looking at their code on GitHub, but it was way too much for me to understand and code again. No experience with Typescript or building any browser extension did not help also.

Then I found puppeteer ( thanks @wobsoriano )

I poked around Coil's website and found that they were setting a jwt in localStorage whenever a user logs in. This allowed for the login and logout functionality, as I had to just store the jwt locally.

For monetizing packages, I set up probabilistic revenue sharing and made a template HTML file which would fill up with the values of the respective wallets for 65 seconds each.

A lot of work was also done to make listeners work as expected, and keeping the functionality similar to the browser counterpart.

These pages were then fed to puppeteer which sent payments using coil's extension after looking at the set wallet.

All the resources are already linked throughout the post.