This week was about demonstrating full control over database content, and expanding our webapp knowledge to include data storage. Normally, if you want to store data you'd use a database where your data persists beyond shut-down and restart. The data persisted so strongly that I was dreaming about databases.

CRCs are an aim to help programmers brainstorm the design of their software. In a workshop, we were given a user story, interpreted the objects into cards with responsibilties listed on the left and collaborator classes listed on the right. As we were given more user stories for the project we created more cards/responsbilities/collaborations.

As a milk maid(?!)
So that I can sell milk
I want to see if a cow is ready to be milked

...I want to dock a cow in the milking station

...I want to know how many cows I have

Here are these user stories represented as CRC cards: 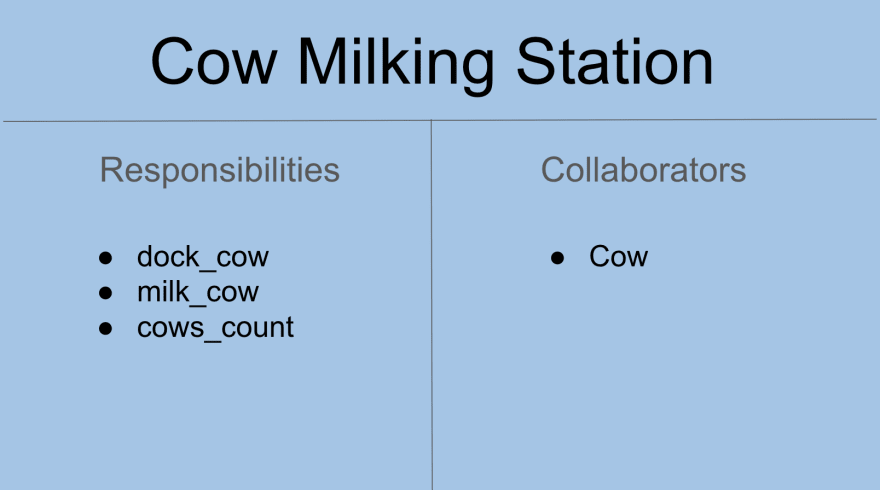 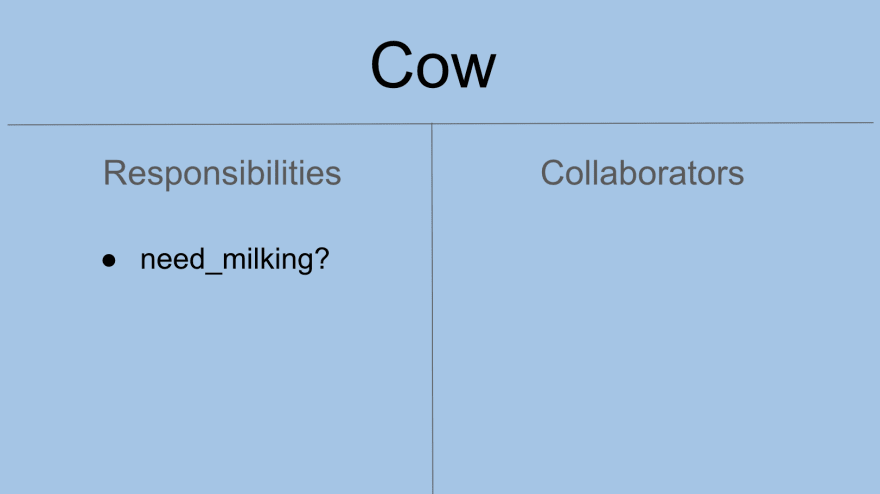 Here is a database model for these cow related scenarios:

One of the coaches shared with me a couple of clues to spot when to seperate responsibilities (and use dependency injection).

🏆 I had my first stack overflow error!
🌊 How do you pronounce SQL: s-q-l or sequel? When someone suggested 'sea gull' I couldn't stop laughing!1
🌽 Fascinating to hear from Sainsbury's about their digital team: what they do with data, power generation, and cabbage tracking.
⚠️I keep forgetting how to run VSC from the command line when I restart the terminal :Command + Shift + P then select Shell Command : Install 'code' in PATH
📝 everything comes back to hashes of arrays or arrays of hashes...

Once suspended, ruthmoog will not be able to comment or publish posts until their suspension is removed.

Once unsuspended, ruthmoog will be able to comment and publish posts again.

Once unpublished, all posts by ruthmoog will become hidden and only accessible to themselves.

If ruthmoog is not suspended, they can still re-publish their posts from their dashboard.

Once unpublished, this post will become invisible to the public and only accessible to ruthmoog.

Thanks for keeping DEV Community 👩‍💻👨‍💻 safe. Here is what you can do to flag ruthmoog:

Unflagging ruthmoog will restore default visibility to their posts.