This is the first part in an n+1 part series of my journey on bringing up a Raspberry Pi cluster for hosting a few services I use at my home network.

The desktop PC will be replaced by a dedicated NAS in the near future. Look for an update to this post soonish with the details. 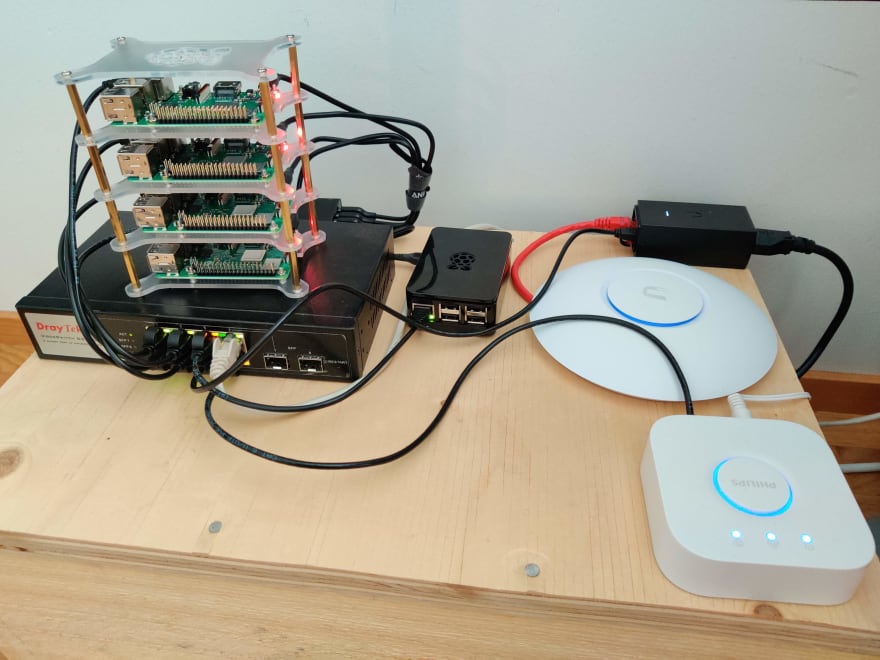 Basic example of how to boot a bunch of Raspberry Pis over network with no SD cards.

This is written with Raspberry Pi 3 Model B+ and Raspbian Stretch in mind.

A Dockerized TFTP and NFS4 server are used to provide boot/root files for the Pis. The example here uses public, 3rd party images from Docker Hub. Please direct any issues with those to the respective maintainers.

Setting up the contents for TFTP/NFS:

This will extract, and modify, the contents from Raspbian image to dir the included docker-compose.yaml expects. hostname here will be the Pis hostname, whereas nfsip and tftpip…

Raspbian Stretch is used here since I could not get the latest (2019-07-10) Buster to boot from NFS. I'll give that another try on a later date.

Setting this up is, in the end, fairly straight-forward once you know what you need.

Since I'm running using 3B+, no setup for the Pi itself is needed. Network boot is enabled by default (see 1).

The only thing you might be interested in from the Pi itself is its serial number which we'll need later in the TFTP boot part. There are couple ways to find it: you can either boot the Pi up using a regular Raspbian SD card and do cat /proc/cpuinfo or, if you can capture the network traffic from the TFTP boot, you also can find it from the TFTP requests the Pi makes.

You can get the required file content from an installed Raspbian SD card like the official guide 1 does. Or you can simply extract them from the Raspbian image. That's what we'll go with here.

The official Raspbian image has two partitions /boot and / respectively. We can mount these and copy the files directly without having to write them to an SD card:

From here you can rsync these to where ever you will serve them over TFTP and NFS. You may want to do couple modifications to the content, I'll cover those in the NFS chapter.

TFTP is needed for loading the kernel and whatnot. This content usually lives in /boot/ on the SD card. For TFTP boot, you simply need to serve these files over TFTP. You can see how to get the files in the previous chapter.

Once you have the files, you'll need to setup a directory structure so that the TFTP root has bootcode.bin and all other files are a directory that's name is the serial number. The Raspbian boot will first fetch bootcode.bin and then automatically try for the next files from <serial>/start.elf and so on.2 It will default back to looking for the files from the TFTP root if they are not found from <serial>/*, but since the aim is to boot multiple Pis, and to also reserve the possibility to run different OS versions, it's better to have them in separate dirs for all Pis (hint: you could always symlink/bind mount these if you don't want to multiply the files).

Couple mods needed for the files:

Couple things to note here on the cmdline.txt mods:

We'll use NFS to serve all file system content completely replacing the usual SD card. As opposed to most other guides I found, NFSv4 will be used instead of NFSv3. I won't go into details on what v4 does better than v3, other than that it's newer, and it eliminates the need for running portmap, rcpbind and all other useless crap on the server side.

NFS will be used to serve both /boot and / content for the Pis. You can get away without actually mounting /boot, but that will make OS upgrades (and first boot SSH) trickier. You can get the files from the Raspbian image as shown previously, simply rsync them to separate subdirs under your NFS share.

The Docker example in my repo 3 uses a third party Docker image for the NFS part which basically creates a share with the following params:

The important thing here is to use sync and rw. Having no_root_squash will allow files made by root to remain owned by root (as opposed to the usual NFS way of mapping root to nobody or equivalent). This, together with no_auth_nlm, insecure, and letting anyone mount this (*) make this very insecure NFS setup, but at this point this is only meant for proof-of-concept level setup. I'll address this when updating to a "real" NFS server.

As hinted earlier, couple mods to the files are suggested before booting up the Pis for the first time:

To tie all this together, DHCP needs to point our Pis to the TFTP server for boot. The official tutorial 1 shows how to do this using dnsmasq but since I already had a working DHCP via Unifi USG, I simply used that to point towards my TFTP:

Unless you have a readily available DHCP server already that can do this, dnsmasq is not a bad choice and works perfect for completely closed off clusters, too.

Apart from pointing the DHCP clients towards the TFTP server, I chose to setup static leases for them just to make life in future a little simpler if I end up in a situation where DNS names won't work.

After all this setup is done, all that is left to do is power up the Pis with Ethernet connect and watch the blinkenlights:

You can see the Pis starting to query TFTP right away:

After loading the kernel and other basics, they start to load the NFS content and take couple minutes to boot up completely after which they are connectable. Throw in some SSH keys and you're ready to roll:

The hostnames might give away the purpose of this cluster. Up next, sprinkle in some Kubernetes.

Once suspended, weeee will not be able to comment or publish posts until their suspension is removed.

Once unsuspended, weeee will be able to comment and publish posts again.

Once unpublished, all posts by weeee will become hidden and only accessible to themselves.

If weeee is not suspended, they can still re-publish their posts from their dashboard.

Once unpublished, this post will become invisible to the public and only accessible to Ville-Veikko Kovalainen.

Thanks for keeping DEV Community 👩‍💻👨‍💻 safe. Here is what you can do to flag weeee:

Unflagging weeee will restore default visibility to their posts.