I made a mistake in my commit, how do I fix it ?

My commit history is a mess, how do I make it neater?

If you have ever had the above questions, then this post is for you.

If you do not know Git basics, click here to check out my blog on Git basics. It is necessary that you know basics of Git to make the best use of this article.

I made a mistake in my commit. What should I do?

Let’s say that you have committed a bunch of files and realised that the commit message you entered is actually not clear. Now you want to change the commit message. In order to do this you can use git commit --amend

Let’s say that you wanted to commit six files but, by mistake, you end up committing only five files. You may think that you can create a new commit and add the 6th file to that commit.

There is nothing wrong with this approach. But, to maintain a neat commit history, wouldn’t it be nicer if you could actually somehow add this file to your previous commit itself? This can be done through git commit --amend as well:

--no-edit means that the commit message does not change.

That said, it’s possible that for a particular project you want to use a different email ID. You need to configure the email id for that project with the command:

Let’s say that you forgot to configure the email and already did your first commit. Amend can be used to change the author of your previous commit as well. The author of the commit can be changed using the following command:

Use the amend command only in your local repository. Using amend for the remote repository can create a lot of confusion.

My Commit history is a mess. How do I handle it?

Let’s say that you are working on a piece of code. You know that the code is going to take approximately ten days to complete. Within those ten days, the other developers will also be committing code to the remote repository.

How do you make the commit history look neater?

This is where rebase comes to the rescue.

Let me explain this through an example.

While rebasing, your goal is to ensure the Feature branch gets the latest code from the Release branch.

Rebasing tries to add each commit, one by one, and checks for conflicts. Does that sound confusing?

Let me explain with the help of a diagram.

This shows what rebasing actually does internally: 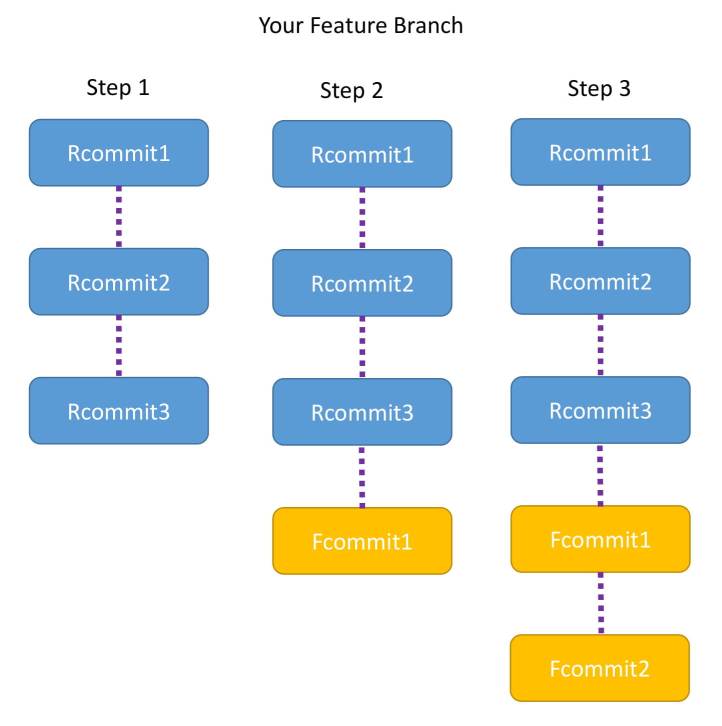 Both of these are very useful concepts. Go explore the world of Git to learn
even more.

Dockerize your Development Environment for NodeJS

10 useful HTML5 features, you may not be using