With the rapidly growing software development industry and technology stacks, choosing the right way for web app development has become one of the complicated tasks. There are many technologies and programming languages that come and go over the years, but JavaScript is the one standalone technology that has not only maintained its position but also influence software development companies for building high-end applications. 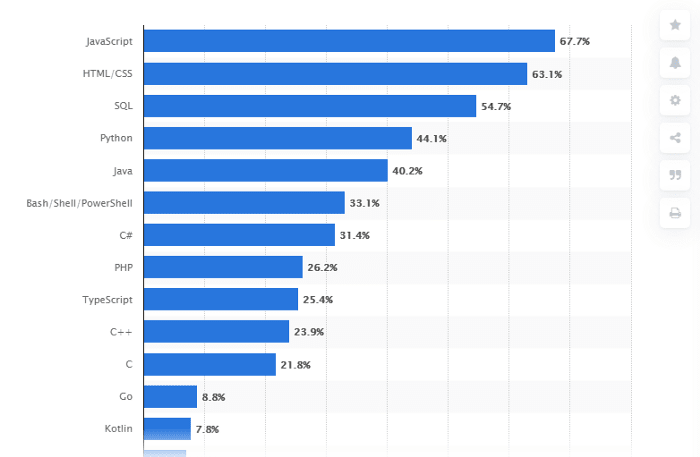 According to the Survey, 67.7% of developers are still preferring JavaScript for web app development.

However, now Node.Js has not just become an altercation of JavaScript but also majorly based on it. According to the survey reports, 51.4% of respondents used Node.Js leaving aside some of the most powerful frameworks, libraries, and other software development tools. 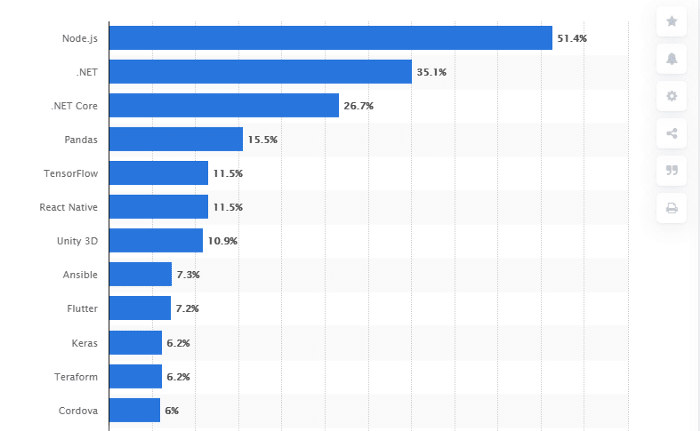 In addition, Jeff Harrel, the Director of Engineering at PayPal says “Node.Js powers our web applications and has allowed our teams to move much faster in bringing their designs to life”.

But, what key features making Node.Js 2020 ready? Is choosing Node.js over other technologies a winning choice for startups or enterprises…Let’s learn…

If you are one of those new techs who are not much aware of Node.js, then it’s better to get started with the overview of the Node.Js!

Node.Js is originally launched by Ryal Dahl, as a set of libraries that used to run on top of the V8 engine and allowing to run JavaScript code on the server. If putting it in simple words, then Node.js is neither a library nor a framework. In fact, Node.Js is a cross-platform, open-source JavaScript runtime that actually works on the server-side. It simply means that you can execute JavaScript codes on your computer machine by using that runtime instead of running it in the browser. Sounds interesting, right! That’s how Node.js gonna work and empowering developers.

In addition, it won’t be wrong calling Node.js a strong yet feature-rich framework, as it provides a unique combination of libraries, helpers, and various tools that make the entire web app development process far simpler and easier to operate. Moreover, it provides a strong base to build your web apps and safeguard your online presence.

Elements of Node.js are V8, libuv, Http-parser, C-ares, OpenSSL, and zlib. While Node.js has been relishing developer’s attention since its launch and exceptionally used for the real-time applications. Node.Js is undoubtedly packed with the unique set of features that have helped it become a top choice for developers when it comes to web app development.
However, still many of you wondering what exactly sets Node.Js apart from other libraries and frameworks. The simple answer to this question is its Core Elements.

For better understanding let’s split Node.Js into two parts: V8 and Libuv. On the one hand, V8 is composed of 70% C++ and 30% of JavaScript, on the other hand, Libuv is completely written in C. 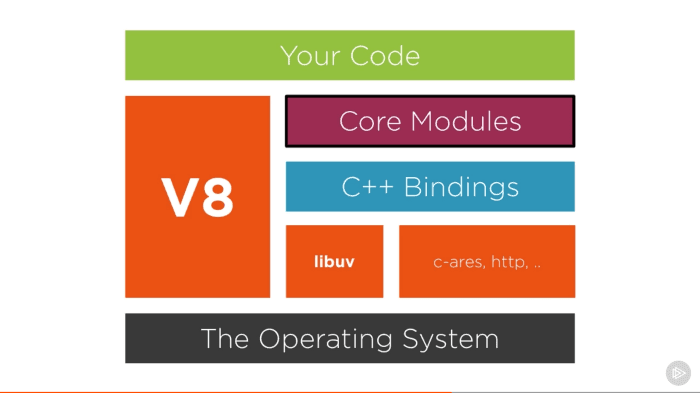 Let’s understand it in a simple language:

If you ever get a chance to take a closer look at the Node.js code, you will find the two main folders “Lib and SRC”. The “Lib” folder is the one that contains all the JavaScript functions and modules that required into the project where the “SRC” folder contains all the C++ implementations. 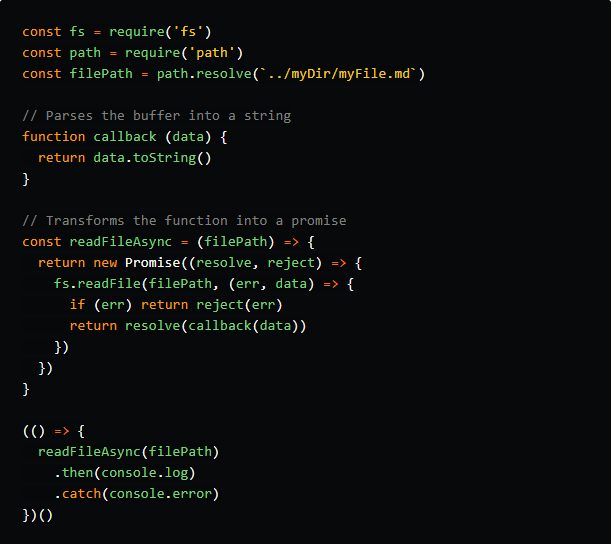 So now, you must have a fair idea about what exactly is Node.js and it’s core elements that made it stronger over others. However, the central question remains the same, that what are the top features that make Node.Js development trends for 2020.

Key Features of Node.js Making It Ready for 2020

Making an investment in the web app development is a crucial decision, so before proceeding for the top web development company, you should what makes Node.js best over others.

So when it comes to choosing the Node.js for developing web apps, undoubtedly 51% developers love using it becuase of its speed and multi-user proficiency. Secondly, since it is majorly based on JavaScript, therefore, making a real-time application becomes easier with Node.js. All-in-all, Node.Js is a combination of library, framework, and other development tools that simplifies the job of full-stack web developer and ensure effortless development.

Let’s Understand the Key Features of Node.Js in detail to make a better choice for web app development:

As the businesses are growing rapidly, they are looking for frameworks that can easily adaptable and scalable as the user base grow. and Node.js has the power to host any size of the audience seamlessly.

Conclusion: Many leading companies like PayPal have switched their technologies to develop Node.js application and noticed 35% decrease in response time as compare to migrating it from Java. 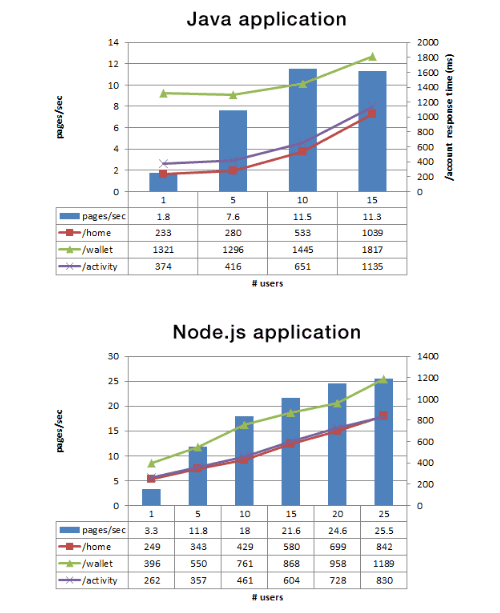 With the increasing demand for applications, microservices have become one of the major needs for businesses struggling with web app performance.

Every project started out small or with the basic MVP, but sooner or later it starts growing and demand the new features. As your user base grow and your app expanded with new features, you may end up with a huge project and your web development company will keep struggles to cope with. On one side you probably need to add new features and on the other hand, you need to provide the top-notch performance to the users. Well, this one of the most common problems among enterprise applications. But the simple answer to this problem is to look for a Microservice pattern.

It means “a microservice is a single self-contained unit which, together with many others, makes up a large application. By splitting your app into small units every part of it is independently deployable and scalable, can be written by different teams and in different programming languages, and can be tested individually”.

When Walmart shifted to microservices architecture with Node.Js, they get immediate benefits: 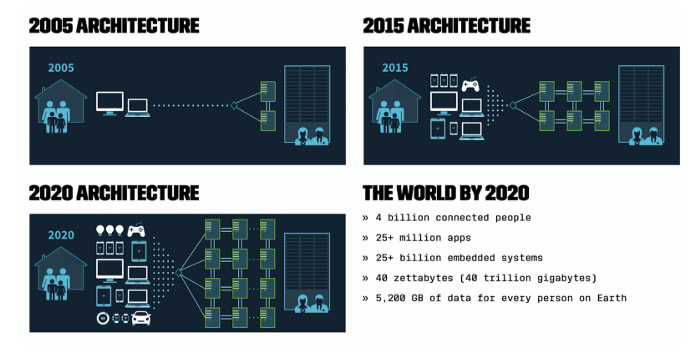 Going serverless with the Node.js can help you save a great cost and time as most of the web applications run on high-maintenance servers.

Since nowadays software development companies have a dedicated team of engineers to help manage and maintain servers, why to make it complicated for you when Node.js serverless and hardware-free solutions are here to save you.

This will not only help in reducing time and cost but also enhanced the efficiency and productivity of the developers as well as software development companies using this framework.

Some benefits of using serverless applications

Serverless applications are like a piece of code that usually functions closely like the AWS Lambda. It means, it is executed based on the kind of event triggered. Moreover, it ensures a faster deployment cycle run via a single command.

Take a look of an example:

In simple words, NMP is a default package manager of Node.js which allows programmers to install, update, and access open-source JavaScript tools for modern web applications. With over 836,000 libraries available in NPM and over 10,000 new ones being published every week, Node.js ecosystem becomes quite rich and providing a vast variety of free accessible tools in a few clicks to developers. 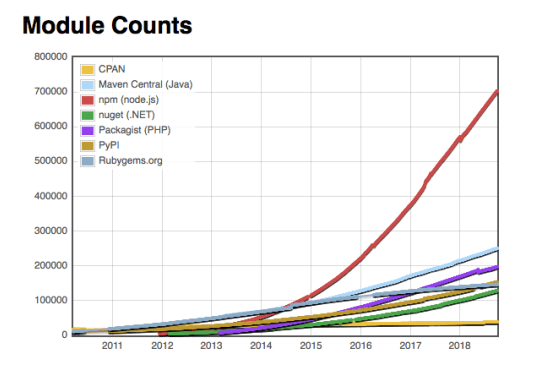 According to the survey, 7% of users are using NPM to build front-end web applications whereas 77% of enterprises are building Node.js applications. One prime reason behind this is, NPM has released the “Enterprise version” of package manager that ensures high-end privacy and security of the web application.

Moreover, you can choose to hire web developer to leverage the NPM package managers and avoid writing the common features right from the scratch and eliminate the risk of adding new layers of complexity to the development process.

Platforms like Electron and NW.js have introduced a new way of writing cross-platform applications with Node.js like technologies. It means, now you can develop desktop apps with Node.js by simply using some code lines from your web app to create desktop versions for mainly macOS, Windows, and Linux. The best part about this, the same team working on a web app can deliver the desktop app without having the expert knowledge of programming languages like Objective-C, C#, or other required for building native apps.

Also, the majority of the Node.js tools are cross-platform, so developer’s don’t require a specific machine to write, debug, and build a Windows, macOS, or Linux apps.

Highly modern enterprises are already knowing that developing your web app with Node.js is probably an optimum way to improve app performance, increasing coding efficiency, and bringing overall happiness to their development team.

To end this post, it is worth mentioning that that Ruby on Rail is the biggest titan of the development industry but still, a huge part of web development solutions revolves around JavaScripts frameworks. For front-end — Vue.js, React and Angular.Js are ruling but Node.js is the biggest choice for back-end development.

So with the above-given futuristic features, I see strong reasons for choosing Node.js for building web application that delivers smooth and excellent user experience. And for enterprises, still find themselves stuck anywhere in between the features, can choose to get a partner with the right team of developers, who are capable of making the most of this modern web app development framework and make your app future-ready.

14 CSS Topics You Must Know

Add Eslint, Prettier, and Airbnb style guide to your project.

What is getStaticProps() in Nextjs?

Alexey Chang
I am a passionate person when it comes to software development. A positive creative individual with a smile.
Ignore Console.log() From Now On!
#javascript #node #debugging #chrome
JS Coding Patterns that give you away as a Junior Developer
#javascript #functional #coding #programming
Converting an iterable to an array in JavaScript?
#javascript #object #array #string