As a web developer fiddling around with JavaScript most of the time, I wanted to explore the territories of a different language and document the learning journey in the process. I decided to learn Python, one of the most loved and popular languages, something which had been in my wishlist for a while. It would be really nice I believe to explore the new possibilities that Python is so widely recognized for such as Data Science, Machine Learning etc.

I decided to split the learning roadmap in 4 weeks with each week dedicated to learning some specific areas of the language. As a developer, I know it is quite impossible to master a language in such a short span but a daily deliberate practice routine for the same duration is sufficient to start building interesting projects and build the foundations.

Documenting my daily progress would help me build a reference journal for future reference as well. I hope can act

I found this great video where the founder himself shares a brief story about the language. 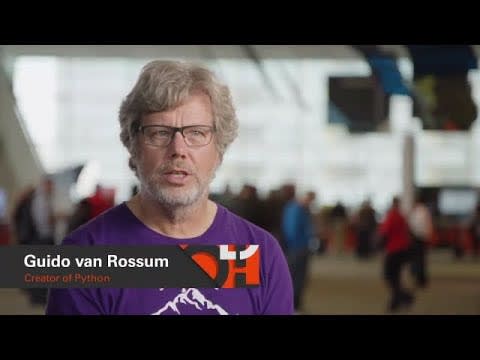 Understanding about how Python works in simple words

Python is a high-level interpreted programming language.
What it means is that the python code needs to be translated (interpreted) by another software program which is called the interpreter that executes the code line by line and converts it into bytecode (very close to machine-readable code).
This bytecode is run by the Python virtual machine (gets installed when we install python) and then converted into machine-readable binary code which computers can process and perform the necessary action.

Each of the implementations of their own features and trade-offs.

There are two major versions v2 and v3. In 2008, several major improvements were introduced in the language that introduced some breaking changes without considering backwards compatibility. The official docs now recommend using v3 and support for v2 would be ceased after 2020.

To keep things extremely simple at first, I wanted to play around with some basic hello world type code, to begin with.
I used the amazing online playground REPL to kickstart writing some python code and do a syntax comparison with JavaScript as well.

comparing it with JavaScript

Well, that's pretty much for Day-1! I know I have barely written any code. I just wanted to spend my first day in building the roadmap. Now that I have the language split into chunks, the goal would be to focus on the weekly goals and share daily progress about the same.

Have a great one!

How to Create and Use a Virtual Environment in Python in Ubuntu 22.04

Once suspended, arindamdawn will not be able to comment or publish posts until their suspension is removed.

Once unsuspended, arindamdawn will be able to comment and publish posts again.

Once unpublished, all posts by arindamdawn will become hidden and only accessible to themselves.

If arindamdawn is not suspended, they can still re-publish their posts from their dashboard.

Once unpublished, this post will become invisible to the public and only accessible to Arindam Dawn.

Thanks for keeping DEV Community 👩‍💻👨‍💻 safe. Here is what you can do to flag arindamdawn:

Unflagging arindamdawn will restore default visibility to their posts.