In the first post (Part 1. Clock-in/out System: Diagram) we described the different components of our clock-in/out system. So, if you don’t
understand the architecture of the system you can read that post because I’ve
described each component of the system.

In this post, I’m going to describe the basic backend using NestJS. The first
step is understand which is the directory structure. If you use the NestJS
starter project to start a project you could to do the following steps:

After that, we need create our own modules structure inside src directory as
you can see in Figure 1. 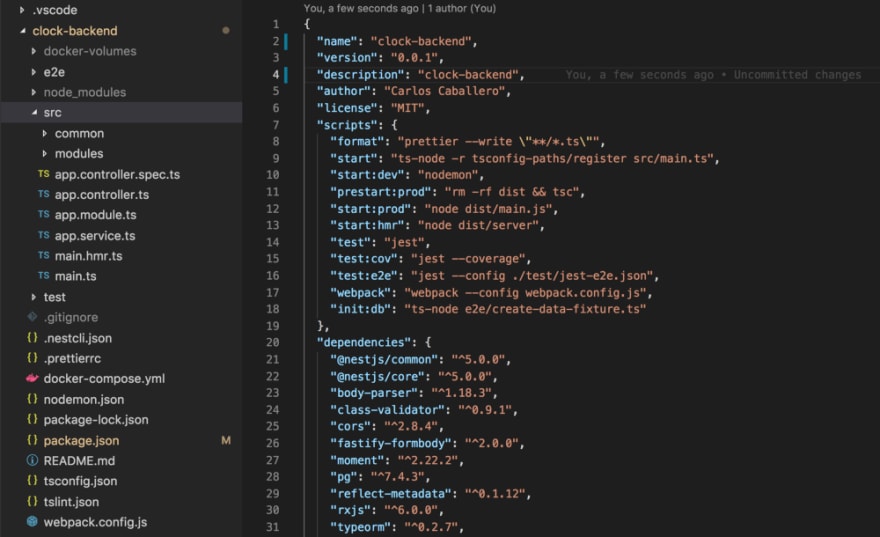 In this moment the server is running in port 3000 and the endpoint
http://localhost:3000/ using the verb GET is working. If you navigate on
this address you get a message of Hello World as shown in Figure 2.

The next step is define which are the modules need to our backend:

The module database is used to shared the DatabaseConnection. We’re using
TypeORM as ORM which is integrated perfectly in NestJS. So the definition of our
database.module is the following: 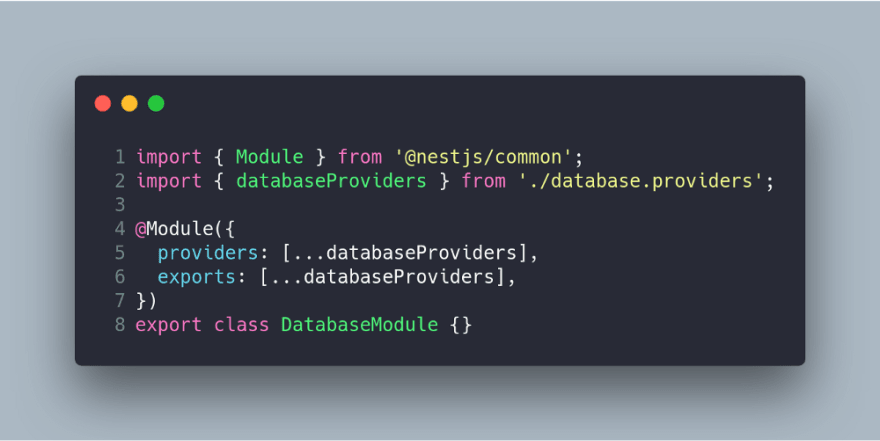 In the provider we’re defining our DbConnectionToken using a factory. In our
case we're using Postgres as database. So, the most interesting part is the
definition of entities which are automatically detect in TypeORM. Although
NestJS include a specify module to manage TypeORM connection, I prefer
configure the provider using directly the method createConnection from typeorm
library.

In this point, we must to install the following libraries in node: 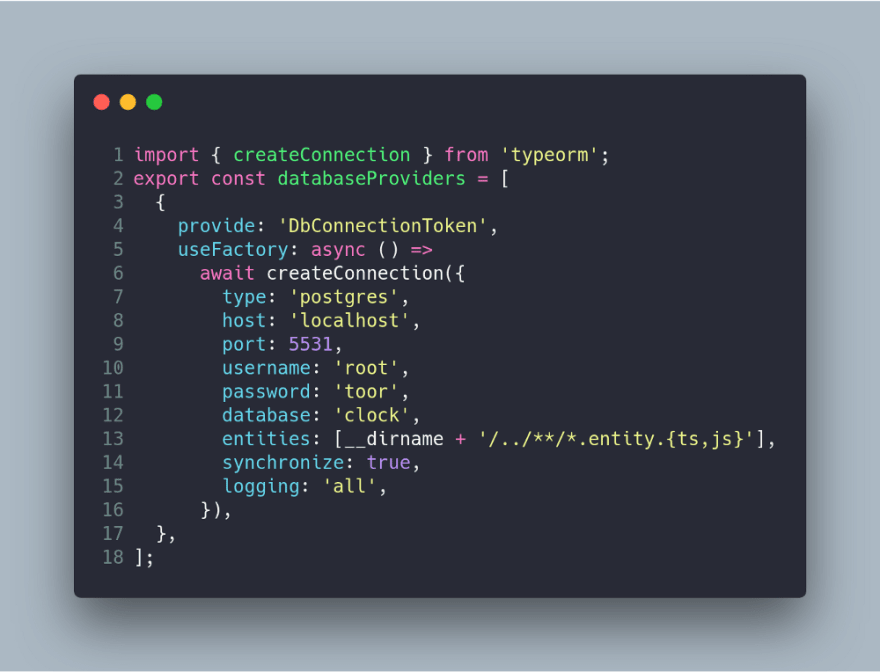 So, the next step is install a database Postgres in your machine but I think
that the use of Docker is better option because you can get a clean environment
to develop which will be the same when you deploy.

So, the docker-compose in which you will be a container called
PostgreTestClock using the port 5531 is the following: 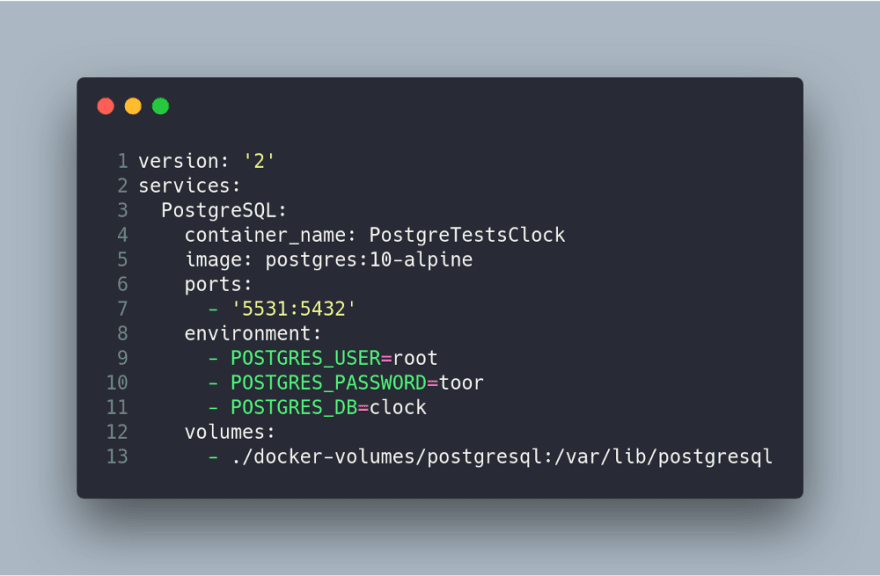 So, to start the database of the system only run the command docker-compose
up. This module will be used by other modules to connect to the database.

The second module that we have implemented is AuthModule, this module have the
structure show in the Figure 3. You can note that there are several directories
as constants, DTOs and entities which are used to organised a module
independently as a service. The idea is build as module as a service because any
day you could build microservices. However, in this project all modules are
relation between them because is architecture is very complex to this project. 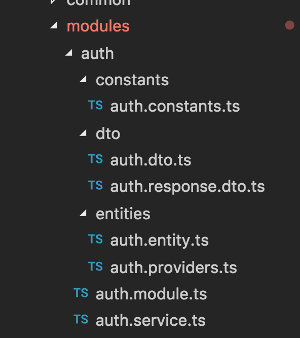 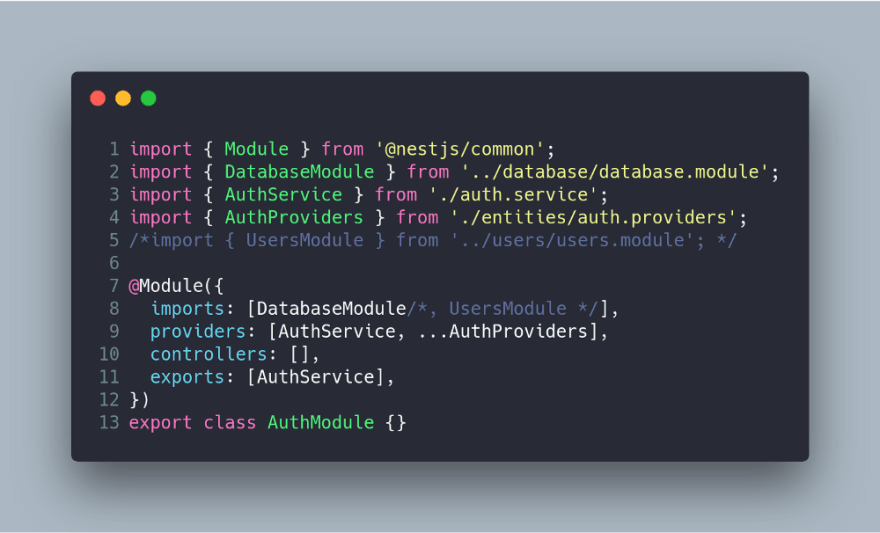 The next step is know that information is saved in the database. That’s define
using the file user.entity. 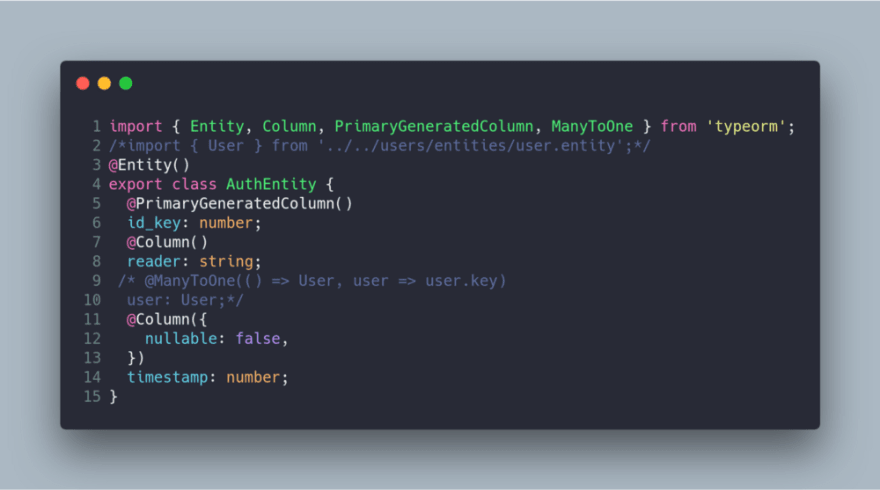 The fields the class AuthEntity are the following:

Finally, the provider file export two repositories to fast access to the
database. The pattern used is the Repository. So, you can inject those providers
using their token (AUTH_REPOSITORY_TOKEN and USER_REPOSITORY_TOKEN) in any
service or controller. 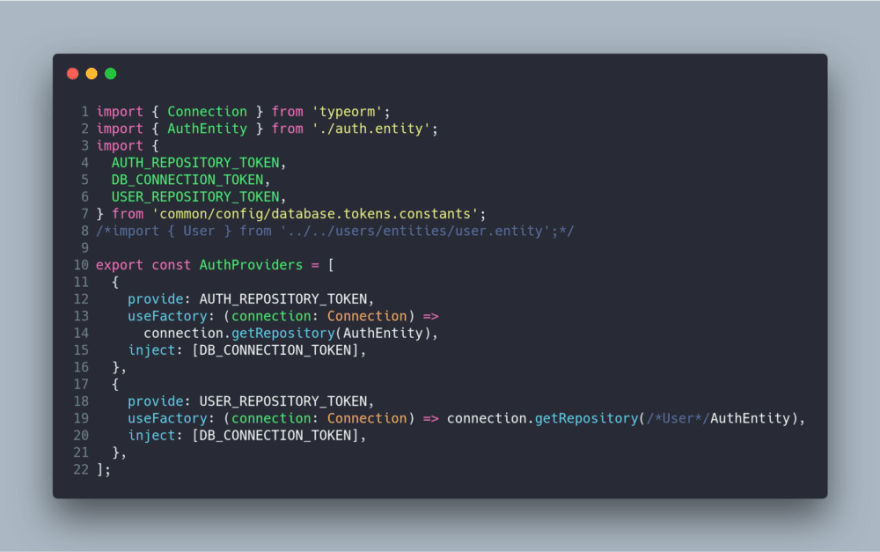 Now, I’m going to show the most easy part of my code but very important. The
constant file and the DTO. The constant file is very useful when you want to
coding clean code (is a good practice don’t use strings or numbers in your code)
and the DTOs define the information which is exchange between client-side and
server-side. ‌

The auth.constant file only have STATUS_CODE_RESPONSE to the Arduino system
which understand 0 as KO and 2 as OK and several moment formats. 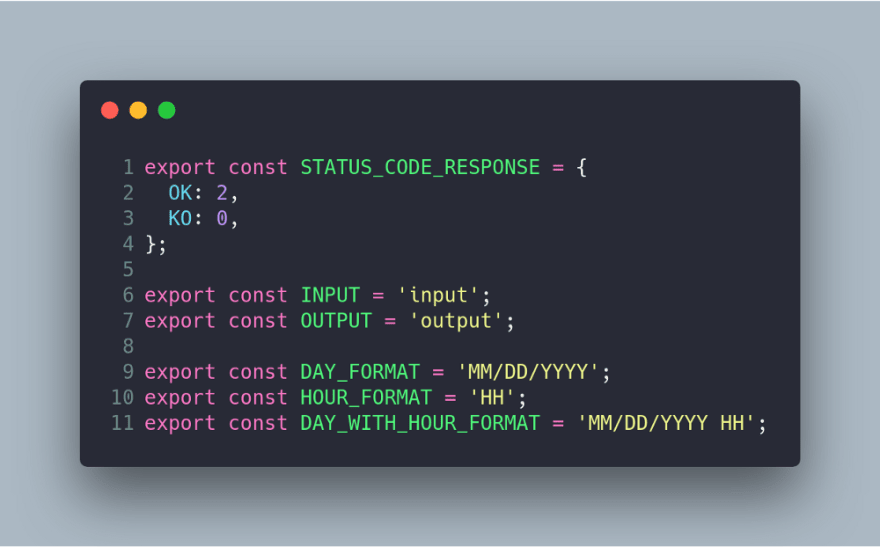 The following DTOs are very simple because only show the interface of an input
(AuthDto) and an output (AuthResponseDto). 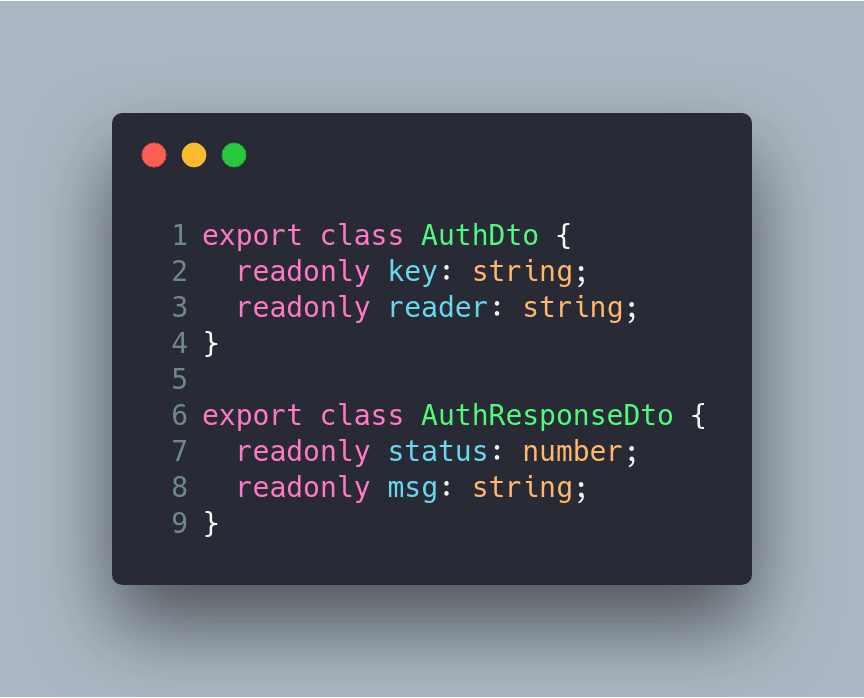 The AuthService should has two important methods:

The code of this methods are the following: 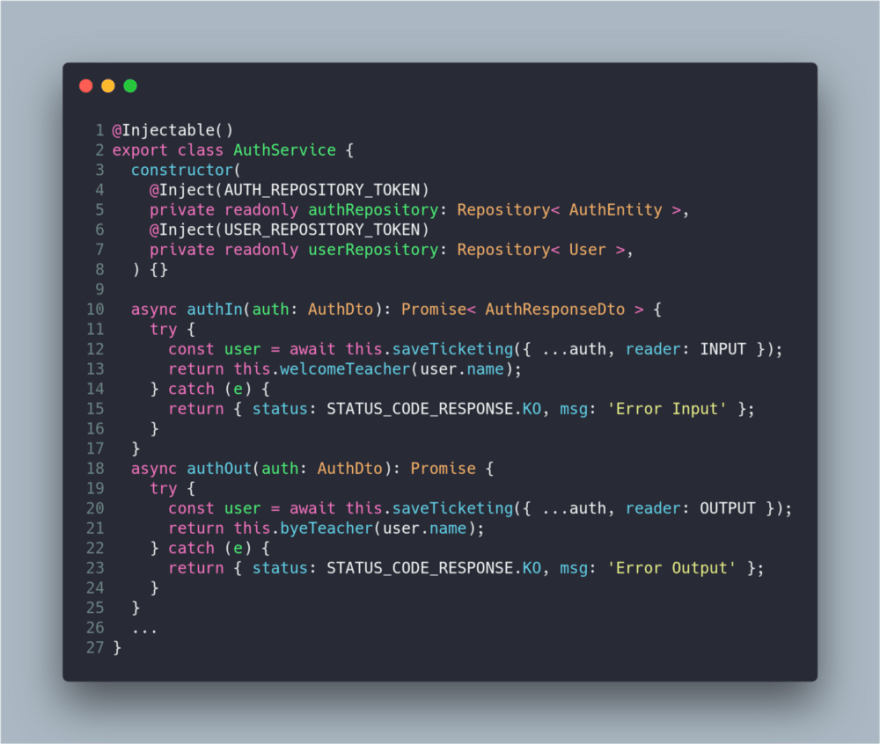 In this class, I’ve inject two repositories (authRepository and userRepository)
which are used to communicate with database. The code is clean because I’ve used
simple async/await and private methods (saveTicketing, welcomeTeacher and
byeTeacher). So, the methods authIn and authOut are simple to
testing in the future. The response of the both methods is an
AuthResponseDto.

The private method saveTicketing is very simple too, the first step is get
the user which the key is associated (auth.key come from the Arduino). After,
you can save the information of authentication: 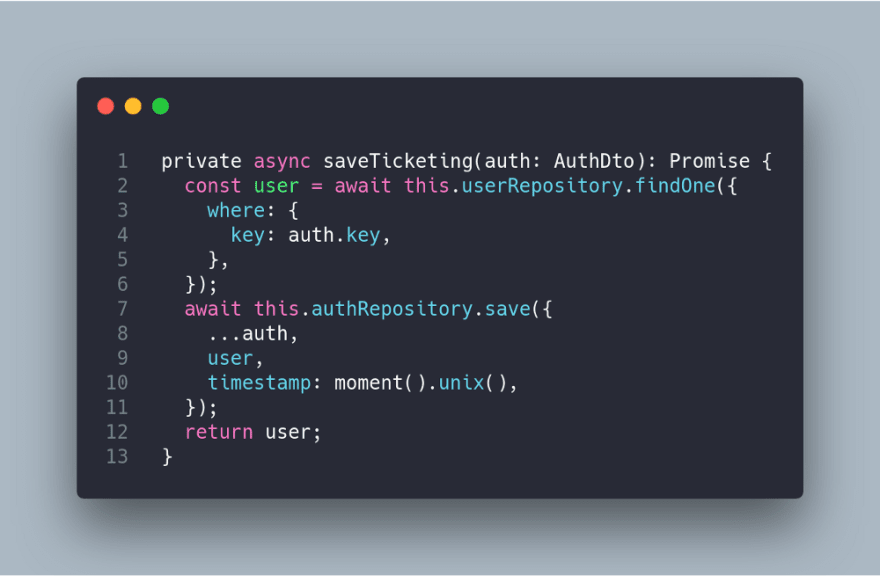 Finally the two methods which show the message to the user (that’s show in the
Arduino screen) are the following: 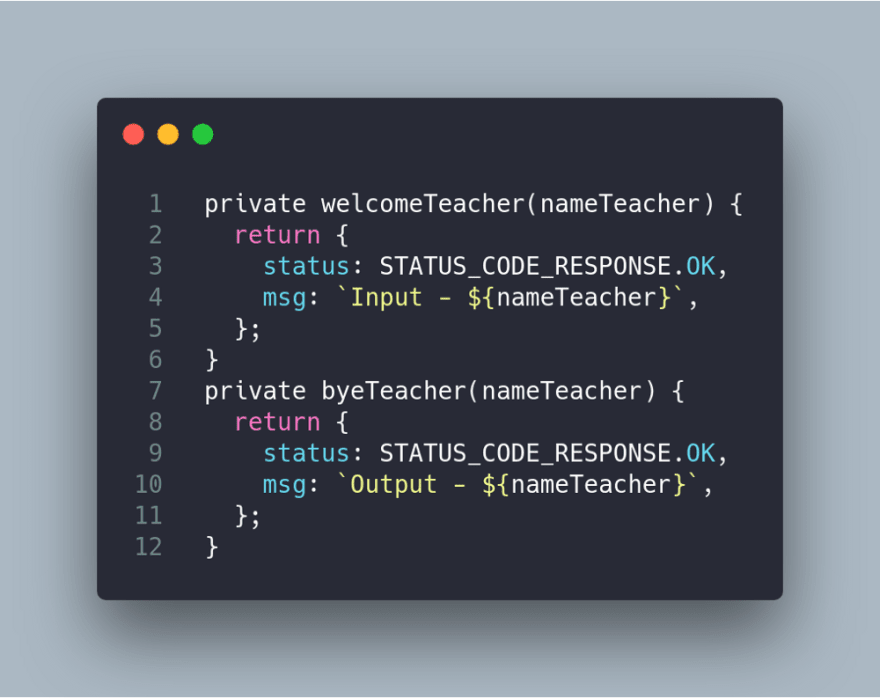 Finally, if you want to see the complete code of AuthService is the following: 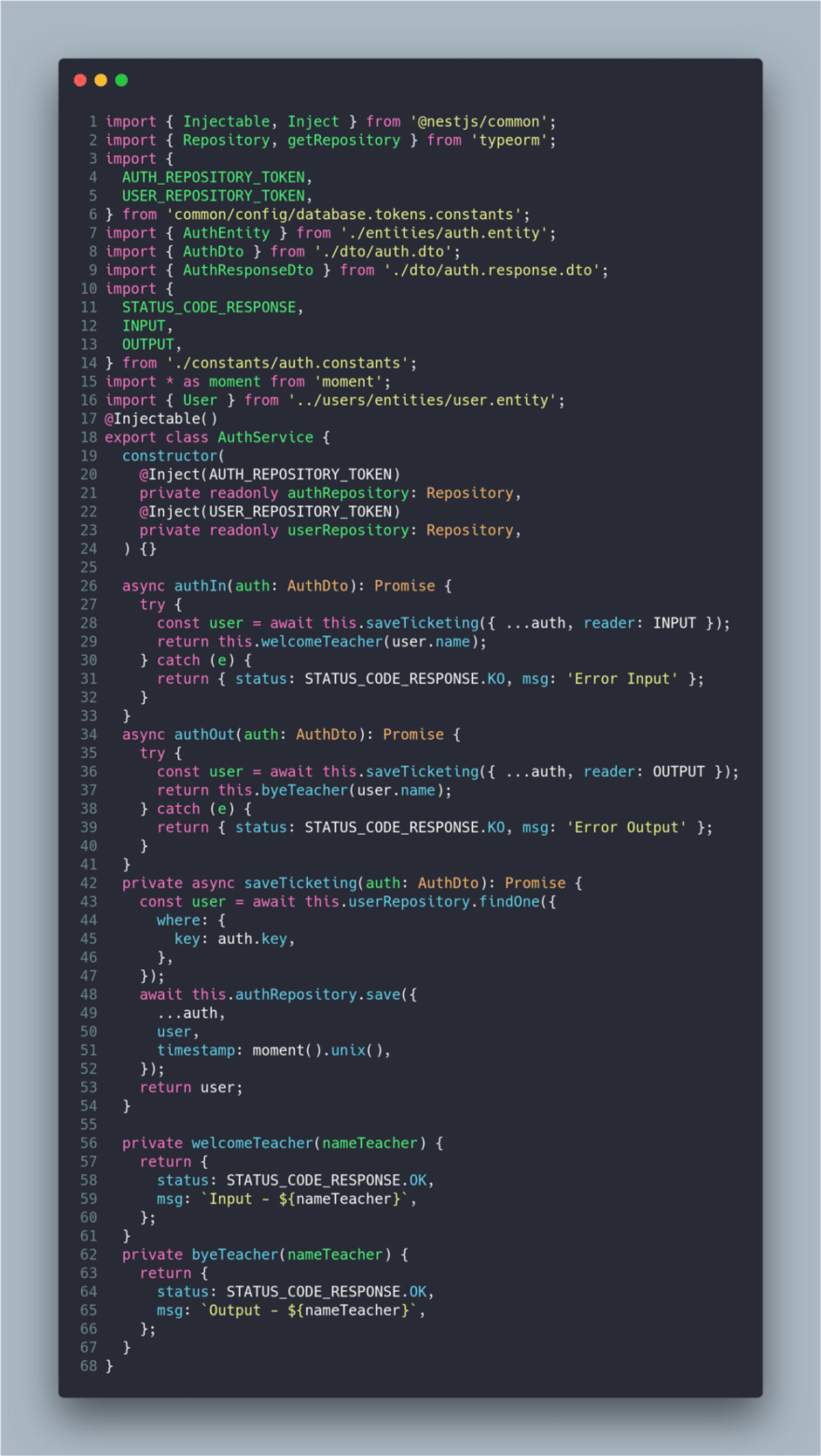 ‌In this post I’ve explain my AuthModule which is very simple because I’m using
clean code in my coding. This module is used to save the information about
clock-in/out.

In the following post of this series I’m going to explain the UsersModule and
AppModule.

The GitHub project is
https://github.com/Caballerog/clock-in-out.

*Originally published at www.carloscaballero.io on November 25, 2018.